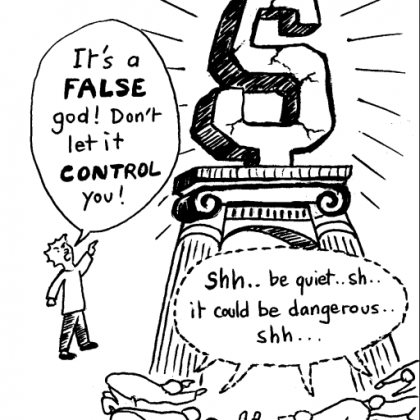 “Tim, will you please stop sabotaging this meeting with hope?!”

I couldn’t stifle my guffaw as a clergy client shared his recent finance committee experience. Incredibly, it’s what a committee member yelled at him before walking out of the meeting.

Tim has been leading his church through revitalization after 20 years of decline. As part of this revitalization he has intentionally sabotaged them with hope. That’s why they called him to be their new pastor in 2018. He moved across country after serving a smaller church plant that he helped grow for over 24 years. With lazer-like vision he saw the challenge before him: to help them recapture the spiritual after a long enslavement to the functional.

At the core of all church decline is the loss of spirituality and the rise of functionality. I’ve been speaking and writing about this dilemma for over 20 years. My deep frustration over that time has been watching churches slip even deeper into functionality in response to the decline.

What is functionality? It’s a secular style of operating that slowly pushes a deep awareness and embrace of God’s presence and guidance away as we try to do things decently and in order. Functionality cares more about how the church functions than about how well it leads us to deeper experiences and encounters with God.

There’s an easy test to see if we’ve become functional. When you hear people say that they’re “spiritual but not religious,” how do you respond? Do you think they’re lazy, shallow, me-focused or New Age-y? If so, we’re taking up the mantle of functionality, because when they say they’re spiritual but not religious, they’re telling us that we’re religious but not spiritual. They’re pointing out our functionality, telling us that they don’t experiencing God in our churches — that we don’t serve as a conduit between them and God.

We rarely use their feedback as a springboard to becoming more intentionally spiritual. Instead we defend our functionality by proclaiming that they’re the shallow ones. We’re so busy placing blame on them that we can’t hear what they’re saying to us: “Dude! At least do something in your church that connects me with God! Don’t just keep doing the same old things, spouting the same old dogma, all while telling me it’s my fault for not finding God in them.”

Don’t mistake my critique of functionality as advocating a namby-pamby, spirit-only approach. I am a deep devotee of modern organizational theory. What I’ve discovered is that modern organizational theory also decries functionality, although usually not by emphasizing the spiritual. Writers such as Simon Sinek, Daniel Pink, Jim Collins, Gillian Tett and many others emphasize a positive, motivating approach. The difference between them and Tim is that Tim clearly recognizes an added dimension: God’s hand that’s always at work in our churches. The spiritual approach is always hopeful, always looking for what’s possible, always seeking where God is leading, and always walking confidently forward in faith, even if there’s no proof that it will work. For instance, the spiritual approach doesn’t deny budgetary realities. It also doesn’t turn budgets into false gods that must be appeased with the chant, “But we can’t afford it!”

The difficulty with a Spirit-led approach is that it requires pastors and church leaders to develop qualities that declining churches diminish: sincere commitment to prayer, listening for God’s call, developing confidence in the possibility that God is speaking, and forging the courage to follow down roads that are anxiety producing for one reason or another.

In 2005 I wrote this in “Becoming a Blessed Church,” and I believe it even more today: Blessed churches aren’t just awake. They are also aware. They have what I would call a ‘mystical awareness’ that God is present. This mystical awareness may not be a conscious awareness, but it is present nonetheless. These congregations look around and see evidence of God. They sense Christ’s presence in the music, prayers, sermons, meetings, groups, fellowship, ministry, and mission of the church. They have ‘Aha!’ moments during the sermon and are aware that God has just spoken to them. They connect with someone in church, and they know that they have just experienced communion with God. They help another member in need, and at some level they know that they have just borne Christ to that person. This mystical awareness again emanates from the pastors and leaders of the church because they are constantly pointing out where God is present. When coincidences or small miracles occur, the leaders point them out and say, ‘There’s Christ in our midst.’ In blessed churches, the people become increasingly aware that not only is Christ present in every person, but also that they have become the body of Christ (1 Cor. 12:12–31) and that Christ is working through everyone, even the least involved.

Be blessed and always be a saboteur of hope, as well as of love, faith, grace, peace, possibility and Christ!