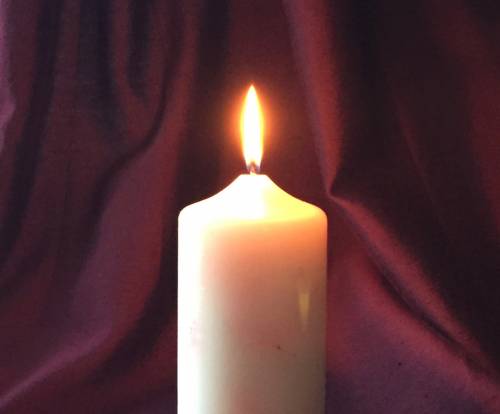 My vote for most dangerous part of a wedding? The unity candle.

A wick that refused to catch fire comes to mind. And I can still see the outdoor candle, just lit, that promptly succumbed to a mischievous breeze. In another wedding, two half-candles, individually lit, were brought together to form one combined flame, which immediately went out.

And then there was the unity candle that disappeared.

We were in the later stages of the ceremony. The bride and the groom had completed the vows and the rings, and it was time for the candle.  But when I looked down from my script to the top of the communion table, something was off. The candle was missing.

It had been there the night before during the rehearsal. It had been there earlier in the day when I walked through the sanctuary on my preflight check. But now, at the critical moment, no candle.

I did a quick scan. Floor around the table. Shelves behind the pulpit. Back of the lectern. Nothing. It was on a second visual pass that I saw it, out in the entryway next to the guest book.

Apparently, someone had moved it out there during the pictures to get a shot of the rings and the guestbook and the candle. Evidently, no one had thought to move it back. So there it was, 90 feet away, with the wedding in progress.

What to do? Between me and the distant candle stood the communion table, the puzzled couple and their eight attendants, two chancel steps, and one long aisle through pews filled with family and wedding guests.

The situation hadn’t been addressed in seminary. I hadn’t heard any war stories from older ministers highlighting their responses to a similar predicament. Meanwhile, the embarrassing silence was lengthening.

I settled on a desperate course of action. Gathering what poise I could muster, I walked around the attendants and down the aisle, with no music, and everybody watching. They were doubtless wondering why the minister was leaving in the middle of the ceremony. Wrong answers from the bride and the groom? Call of nature? Needing to check the score in the big game?

I retrieved the candle and retraced my steps, carrying the AWOL wax the way I imagine one of the magi might have brought a gift to the Christ child.  Regaining the chancel, I placed the candle on the communion table, the couple lit it, and the wedding continued.

Afterwards, standing off to one side and trying to regroup as the newlyweds in the receiving line greeted their guests, I was approached by a short woman of great age. As I took her hand and leaned down to hear her over the organ, she said, “You know, that thing with the candle?” I braced for what might come next. She continued in a wondering tone, “I’ve never seen it done that way before.”

“No,” I thought to myself, “and with any luck, no one ever will again.”

Retired Presbyterian pastor Ken Rummer writes about life and faith from the middle of Iowa by the High Trestle Trail. Previous posts can be found at http://presbyterianmission.org/today/author/krummer