Are We Undone by Our Expectations? 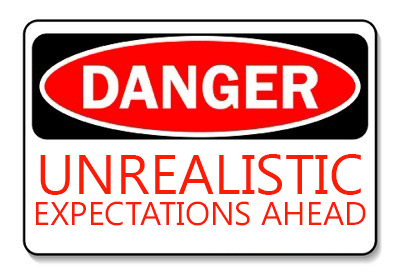 Years ago I worked with a deeply frustrated pastor. We’ll call him Wes. He couldn’t get his church to engage in almost any meaningful ministry or mission. A dinner to support a missionary? Too few signed up. Being more involved in the local food cupboard? Sometimes they contributed, but mostly they forgot. Offering a community worship service with other churches? Two members showed up.

His discouragement was deepened by the fact that the nearby Pentecostal church start-up was attracting all sorts of new people and engaging in all sorts of mission. Worse, some of the younger families from his church were now worshiping there.

Sure, the Pentecostal pastor —  we’ll call him Pete — was younger, but he wasn’t all that dynamic. What did Pete have that Wes didn’t? He believed he was a better preacher than Pete, so what gives? They had more guitars in their service, but it’s not like his church’s music was awful (okay, maybe it was a bit dated).

We talked about Wes’ frustration… a LOT.

What deflated Wes even more were all the church-growth conferences and books he attended and read. He knew how to get a church growing, perhaps even more than the other pastor. So why was Pentecostal Pete’s church growing and his was sinking in quicksand?

Actually, Wes wasn’t asking a very fair question. A fairer question might be why his expectations were so unrealistic?

Wait, what? Shouldn’t he have high expectations for his church? Yes, but shouldn’t he also have pragmatic expectations? He was being taught by pastors who generally started new churches in white, growing, transient, wealthy communities with few traditions or restrictions. How realistic was it that his church would become like theirs?

His favorite church-growth author was Rick Warren, pastor of the Saddleback Community Church, a sprawling mega-church that’s been a mecca for growth-minded pastors for over 30 years. What Wes ignored was that Warren planted that church. He didn’t take over an established church like his with a 100-year history. Warren’s church was amidst hundreds of newly built cul-de-sacs for thousands of people streaming into the area every month. Most worked for Disney or new tech firms. Wes moved into a semi-Appalachian community that used to service the coal and timber industries and now struggled to stay out of crippling poverty. Warren started his church in an literal desert of people thirsty for any kind of church. Wes became pastor of a church suspicious of clergy, especially after having had six pastors in the previous three years, and never having had a pastor stay longer than seven years in its whole 100-year history.

The problem wasn’t with Wes’ ministry. He was a really good pastor for that church. He was a patient, compassionate soul who really helped them gain a sense of stability after their three-year tumult. He was what they needed. They just weren’t what he wanted.

Wes’ ministry was being sabotaged by his expectations. Like Warren, Pete started a church from scratch with no traditions or baggage. It was purposely designed for those with little more than a high school education. The services were simple, and in many ways the sermons were simplistic, focusing on upholding basic biblical values and behaviors. For a population that often felt chaotic, these messages were helpful. Wes’ church had 100 years of both tradition and baggage. He wasn’t starting from scratch. He was starting neck-deep in quicksand.

Wes was called to be a humble, no-name pastor for a struggling church. That may sound sad, but it isn’t. God calls special pastors to minister to broken people. How would Warren have done in Wes’ context? Would Warren have even gone to Appalachian Southwestern Pennsylvania? If he had he probably would have perpetuated that church’s suspicions of pastors by leaving after a year or two. God had called Wes to be the pastor that church needed. Wes’ expectations were preventing him from fully being that kind of pastor.

We are called to be the kind of pastors our churches need, rather than expecting them to be the kind of churches we want. We can have aspirations and ambitions, but they need to be consonant with our context. A church like Wes’ may never grow again, but that doesn’t mean they can’t be loved again and discover God deeply in their midst again. Our expectations need to be commensurate with both our calling and our context — what God calls us to do in the actual context of this church. As Paul says, “To the Jews I became as a Jew, in order to win Jews. To those under the law I became as one under the law… so that I might win those under the law. To those outside the law I became as one outside the law… so that I might win those outside the law. To the weak I became weak, so that I might win the weak. I have become all things to all people, so that I might by any means save some.” (1 Corinthians 9:20-23).

Eventually the church did respond to Wes. He created a program that trained members to call each other over the course of a month and see who needed attention or prayers. It allowed the church to heal and slowly become more active by year five and six of Wes’ ministry. Wes complained to me that it was such a silly little program. I responded that for a church as wounded and self-protective as this one was, getting them to call each other with compassion and healing prayers was amazing. And in the midst of this, new members trickled into the church. Wes helped a deeply suspicious and broken church heal and trust again.

Are our expectations undoing our ministries? Or are they guiding us to be what our churches need? Are we willing to pastor the churches we’re in? Or will we be forever frustrated that God didn’t call us to start a Saddleback?

Perhaps we are where we need to be, but we simply need to be the pastors our churches need.

The Rev. N. Graham Standish, Ph.D., M.S.W., is executive director of Samaritan Counseling, Guidance, Consulting, where he leads their Caring for Clergy and Congregations program (www.ngrahamstandish.org).