Is our church leadership fluid or frozen? 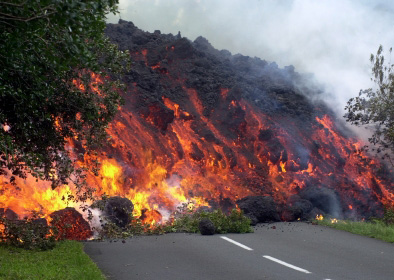 For a number of years I’ve been advising people to “lead more like water and less like lava.” Whenever I do people often look at me as dogs do when they hear a funny noise — ears perked and heads cocked to the side.

I came up with the quip years ago while watching a video of a Hawaiian lava flow. I noticed that whenever it flowed into a significant obstacle (a hill, a trough, the ocean) it froze and became more of a obstacle, leaving a wake of rock that cut off roads, homes and towns. It left people stranded.

Watching the video it hit me: too often we pastors lead like lava.

Then I thought about water. When flowing water meets an obstacle it never really stops. It eventually flows over it, around it, or erodes it. It may take years, but water always finds a way to keep flowing.

I think about this a lot in working with people either as a counselor, spiritual director or clergy coach. My job is to help people become more like water and less like lava, especially when they are mired in a kind of lava leadership.

Too often our churches are like lava. They’ve become frozen rock. As pastors, our calling is to help them become unfrozen, but when we’re confronted with obstacles we didn’t anticipate, do we become like the very lava we’re trying to move out of the way?

A key to healthy leadership is becoming like water in the face of obstacles. This means facing a seemingly intractable problem, and finding a way to either overcome it, work around it, or erode it. It means that if we fail in one way, we look for another. This requires fluid thinking.

Early in my ministry at Calvin Presbyterian Church I tried to start a men’s group. I gathered a group of men and asked them what they wanted to do. They agreed to meet once a month for discussion and possibly mission projects. After six months it failed.

A year later, I tried again. This time it was a weekly breakfast with discussion topics. It worked for about three months. It collapsed after we ran out of interesting things to talk about. A few years later, I created a weekly spiritual book discussion group that met at a local Marriott. Eighteen years later it’s still meeting every Thursday morning.

I tried three different ways to get a men’s group going. Once in the way they wanted. A second in a way someone had suggested. Third in a way that I got training for.

One way or another I was determined to get a men’s group going because I thought it was important to help them become mature. This experience became a key to developing a dynamic small group program for the whole church. The key is that I didn’t become like lava the first time I failed. I became like water looking for another way around the problem.

Becoming like water means transforming our perspective from seeing church members as resisters to our vision, to seeing them as people needing help in moving forward in love.