The economy of grace

The fledglings and the squirrel 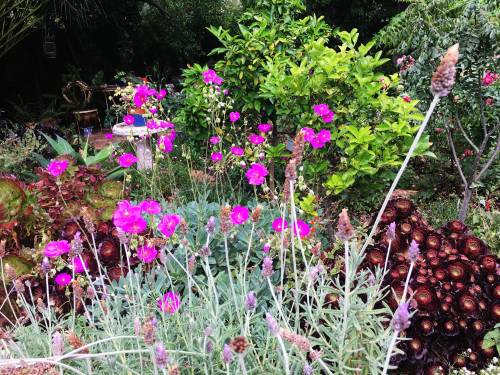 Diversity abounds and thrives in a wildlife friendly, water-wise suburban garden, living proof of the economy of grace

The economy of grace is like a wildlife friendly, suburban garden.

The mourning doves’ nest was empty.  The parents and babies had just flown away.  Grace missed them.  She heard rustling sounds and found a fledgling crow trying to hide behind the purple potato bush.  Soon she learned that the blue eyes meant it was a baby, probably fallen out of a nest in the liquidambar trees.

Delighted by the unexpected gift, Grace put fresh water and prepared scrambled eggs every day for Sheryl, as she called the fledgling.  She even cut fresh fruits, but she took care not to go too near.  She’d heard that young crows were impressionable and imprinted humans very quickly.  Once imprinted, the fledgling would follow people, and not learn from other crows the skills necessary to survive on its own in the world.

So the gentle woman cautiously watched from afar.  She observed the parents feeding Sheryl daily.  She saw Anil, a fox squirrel who lived in the neighborhood, scampering off with the food she had left and sighed. Her running battle with Anil, which is the Tamil word for squirrel, was frustrating; he’d been getting the fruits and vegetables before she could.  She had put up nets and hung dozens of shiny CDs.  He was undeterred.  So she renamed him Voleur, French for thief.

Later that morning, another fledgling dropped down.  She named Sheryl’s sibling, Aalhite.

Nature’s unfolding drama mesmerized Grace.  She and her husband had recently become empty nesters.  Now, she felt encouraged in mystical ways by the parents of non-human species in the urban wilderness.

The fledglings were safe in the sanctuary she had created.  They were unfailingly fed morning and evening.  The incessant cawing from crows in soaring flight in the skies and perilous perches in the tall trees encouraged and warned them.  Once the fledglings learned to fly all the crows left.  Not long after, Voleur, brought a dozen friends to play, an exhilarating sight!  Grace renamed him Volare which means I will fly in Spanish.

God saw everything that he had made, and indeed, it was very good. Genesis 1: 31a (NRSV)

He gives to the animals their food, and to the young ravens when they cry. Psalm 147: 9 (NRSV)

I am Grace.  More than a year has passed since our son left home to start on his own, the fledglings came and flew away, and the squirrels had a party.  I had labored long for a wild-life friendly garden.  The reality transcended my plans and upended my ideas of love and grace.

I had always thought crows unattractive. Now I know otherwise.  Crows use tools.  Their irritating cawing signifies love.  Last June, their constant cawing meant the adult crows were ever present, teaching and protecting.  Their care for the young astonished me.  Whenever I heard them, I remembered yet another thing I could have, should have, and didn’t teach my son.  That the fledglings would imprint humans reminded me of the times I hadn’t protected him.  How was my son’s new neighborhood?  Who was nurturing and protecting him?

Volare, the fox squirrel is a pest that is fast replacing the native grey squirrel.  It is not against the law to get rid of squirrels that are destructive pests but it is against the law to trap them and release them elsewhere.  I had a dilemma:  Volare is my enemy.  Yet, the garden is his neighborhood too.  His presence and his exploits in the garden made me wonder.  Would my son be seen as a pest or a friend?  Would he be exploited, rejected or accepted? How do I love an enemy?

Choosing Christ in the World

I chose Jesus and to live under the reign of God more than a decade ago.  A key part of my new life is the garden.   I planned the backyard to be a wild life sanctuary in the suburb.  Plants from all over the world thrive together. They produce diversely and abundantly, a banquet beyond the material, filling my senses, feeding my faith, nourishing my body, attracting flying friends, and little critters.  Little did I dream that the wild things dropping in would one day reveal the mechanics of spiritual economics, God’s economy of grace.  The babies so lovingly cared for by so many adult crows were a wonder I’d never seen.  Volare the pest’s irruption was a heavenly opportunity.  It set me free from my fears, to celebrate the empty nest with affirmations, trust, and a greater awareness of eco-justice.

Living in the Economy of Grace

Eco-justice is a form of justice that considers the rights of organisms and the natural environment in addition to those of human beings.  An eco-just way of living recognizes and respects the interdependence of all creation and the need to share the land with human and non human.  We choose to live a life that is grounded in being just and equitable with respect to ecological sustainability.  We protect the environment, in small, daily ways, as well as the larger social and economic issues of inequality such as complicity in environmental racism.  The Presbyterian environmental ministries can be a supportive community.   We respond boldly to the Call to Action from GA 223 on Carbon Pricing. We work with neighbors, friends, and Congress to change the world so all creation flourish in the economy of grace.

Jesus told a lot of parables.  I have long wanted to write one.  Thanks to the Rev. Dr. Stephen McCutchan for helpful comments on an early draft.

Anita Coleman is an independent scholar who lives in southern California.  She teaches about bias, categorization, and discipleship and curates the Anti-racism Digital Library.  She is the author of The Garden of Grace: A Daybook of Faith and Healing, a garden-based devotional of Ephesians and Path of Grace, a read-aloud, children’s book about peer pressure and earth-friendly gardens.  She serves on the Boards of the Presbyterian Writers Guild and Presbyterian Women.