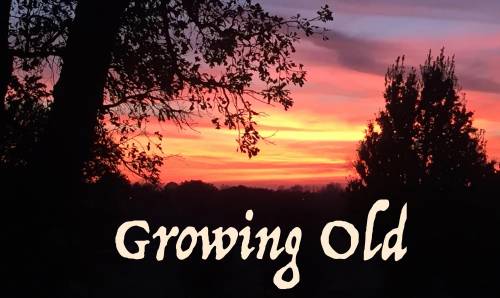 As indeed not every wine, so not every person with the passage of years grows sour.

Cicero, De Senectute (On Old Age), from section 66, my translation

Now that I’m retired, I find I’m wondering more about the ins and outs of growing old.

To begin with, I don’t remember seeing a marker along the way delimiting youth from age and age from youth. There were birthdays, some ending with zero, but on each I was, as they say, only one day older than the day before.

Even now, I feel not old. In my mind, the basketball is still rolling off my finger tips on its way to the hoop. The water is still coming into view at the end of one and a half somersaults off the high board. And I am striding out of a wilderness lake with a canoe on my shoulders in the first bloom of my strength.

Yet the years of my life have blown into a sizable drift, the hairs on my head show more salt than pepper, and the creases in my face that once gave emphasis to strong expressions have settled into permanent features. Three score and ten—I am almost there. And after that?

I say that I can now remember things that never happened (a useful talent for a writer), but it is in the maze of memory that I bump into my age. In the places I walked that are no longer there. In the events I lived that spark no recognition in my hearers. In the faces of those I’ve loved who live no more, save only in faith’s promised future.

I find I’m drawing on the wisdom of older men I’ve known. “It used to take me longer to get tired than to get rested, and now it’s the other way around.” (my grandfather) “Never pass up a chance to pee.” (my contractor friend) “As you go along in life, you have to make a few adjustments.” (a woodworking buddy)

As a child I visited people who were old, and I recall a particular smell, an odor both musty and slightly foul. Of course, it would not have been polite to mention it, and I don’t think I did, at least not to them. Now I wonder if I’m beginning to smell like that.

My obituary is almost finished. Just date and place of death to be filled in. Or is there something yet to live that might warrant another line?  He did good funerals. He never cared much for coffee. In his later years, he surprised everybody by _______.

Not that I want to go back. Once was enough for the awkwardness of pimples, for the specter of the draft, for the weight of early life choices, like faith and partner and profession.

I don’t want to go back, but I wouldn’t mind a little of the energy, the hopefulness, the sense of possibility that I associate with those days. Then, the adventure was just beginning. Now, the credits are rolling on the screen.

But perhaps I’ve got it wrong. Maybe the adventure is still beginning. Or, just maybe, a greater adventure lies ahead.

At the end of a concert, when all the works on the program have been performed, the audience responds with applause. But sometimes they are not ready to have the music end, and with claps and shouts they bring the performer back on stage to play some more.

Seeing myself in something of that situation, I wonder: What shall I pick for my encore? A favorite piece often played, one well-grooved in muscle memory? Or something new, a cry of heart and soul not quite contained within the bounds of note and staff? A favorite feels safer, but I find I’m leaning toward the cry.

I don’t think I want to be a once-famous band still playing my greatest hits for the people who remember them. I think I want to venture something new, to try for something beautiful even now. In the fourth quarter with the clock running. In the gold-red light of the setting sun.

Ken Rummer, a retired Presbyterian pastor, writes about life and faith from the middle of Iowa by the High Trestle Trail. To read previous posts go to https://www.presbyterianmission.org/today/author/krummer/