A reflection of Acts 2

You may have seen in the news how a New York City attorney insulted people at a restaurant and threatened them to call ICE just because they were speaking Spanish.

Recently the president of the United States called some immigrants from Latin America ‘’animals.’’

The current administration just trampled upon long-held immigration statutes to make immigration violations a federal crime instead of a civil violation.

A prominent TV personality proposed shooting immigrants at the border. Undocumented immigrants without any criminal record are being deported and their families separated at record pace.

Obviously, this country is moving in a direction that is diametrically opposed to God’s intention for a society where people from every ethnic, nationality and language can feel safe and free to pursue their dreams and aspirations. Of course, from our history we know that this nation has never been a reflection of God’s kingdom in spite of all the rhetoric to the contrary.

From the Native American genocide, to slavery, Jim Crow, homophobia, xenophobia, misogyny, abject poverty in many communities, etc., the so-called ‘’City of the Hill’’ has always been a myth.

The biblical narrative in Acts 2 gives us a glimpse of what it could be if we allow the grace of God permeate every aspect of our lives, both individual and corporate. Whether we take this ‘’miracle’’ literally or metaphorically, the principle of full inclusion and respect for all of God’s peoples is evident.

The Holy Spirit comes upon the crowd and no matter where they come from, each one of them is able to hear the words of hope in their own language. However, there are still some in the crowd who doubt the power of God, make fun and claim that those who speak other languages are ‘’filled with wine’’ – drunk in other words…

The renowned Methodist Church historian Justo González gives us a plausible explanation. He writes that perhaps these mockers could very well represent the privileged ones in the city and in the church, who expect to understand everything said because their language is the dominant language.

They are at home, and since this is their home they expect everyone to speak their language and do things their way. They represent the ‘’norm’’ to which everyone has to adapt and accept. No other language – or worldview, or way of thinking or doing things – is acceptable. You follow our rules, or you are shot at the border or deported or discriminated against! They think that their language – or way of thinking or acting or whatever – is better than everybody else’s and we are in charge and you and your language don’t matter!

If everyone had been made to understand only one language, then the hegemony of those in power would be justified. People coming into the church would have had to conform to the patterns of the dominant class. People coming into a certain country would have forfeit their heritage and become something else. And it is our duty as descendants of those in Jerusalem to whom God spoke in their own languages to make sure that the church and the society we live in also accepts, affirms and celebrates the differences – and advocates and fights for the rights of everyone, no matter who they are, whether they have documents or not, whom they love, what gender they are or what their race is.

The Holy Spirit would not accept any less… 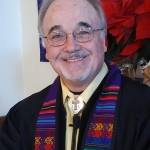 The Rev. Dr. Antonio (Tony) Aja is pastor of Westminster Presbyterian Church in Santa Fe, New Mexico and moderator of the Hispanic/Latinx National Presbyterian Caucus. He is also an adjunct professor at McCormick Theological Seminary.