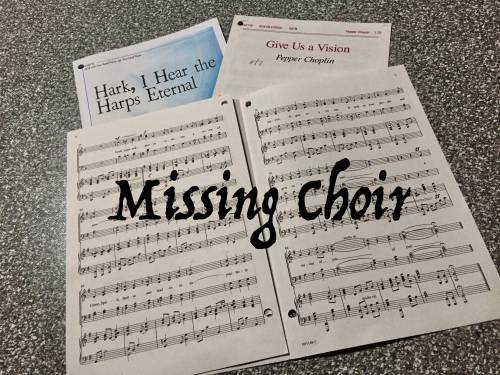 Hearts on Fire, Brains on Ice*

Eight months into retirement, I realized I missed singing in the choir, a surprising conclusion for one who never took choir in school. There was an elementary school solo on “I Dream of Jeannie With The Light Brown Hair” and a fifth grade duet for church on “Be Thou My Vision”—both as a soprano. But no choir.

In my early teens, a friend at church, a year or two older, recruited me to sing in the church choir. My contribution couldn’t have been great, what with my changing voice and not knowing the notes in bass clef, but I sang with the men beside my friend.

Singing in the church choir came with a side benefit for a young man of a certain age: I didn’t have to sit with my family. Choir helped me get through my teenage years still in church.

I learned to read bass clef and to enunciate the final consonants of words. I learned not to breathe at the end of a musical phrase if a sentence of words bridged across it. And I stretched my baritone range to sing high Fs and even an occasional G. (We drew the line there. Our tenor section didn’t do Hs.)

One of the unexpected benefits of singing in a choir was getting songs stuck in my head. You’ve probably had that happen — some jingle on the radio or an oldie from whatever decade your oldies come from keeps replaying in your brain. It was like that, but, with church choir, the snatches of song carried bits of faith and scripture and brought them back through the week.

John Calvin, Reformation leader and hero to Presbyterians, wasn’t a fan of harmony in church music. He favored unison singing without accompaniment, a way to praise God “with one voice” (Romans 15:6). His music maestro in Geneva, Louis Bourgois, the one who likely gave us the tune for the doxology, yearned for a broader musical palette in worship. Harmony too, he believed, can give glory to God. From what I’ve experienced in choir, I think Louis was right on this one.

In Luke’s Christmas story, there are angels in the choir. They are singing “Glory to God.”  When I hear them in my head, they are covering Handel’s rendering in Messiah, or joining  shivering carolers on the chorus of “Angels We Have Heard on High,” stretching the “o” in “gloria” over sixteen cascading notes.

In the last book of the Bible, the angels are singing again: “Worthy is the Lamb”.  But this time they are joined by “every creature in heaven and on earth.” Maybe that’s where we come in, invited to add our voices to the All Creation Choir.

As I began to say, eight months into retirement I realized that I missed singing in the choir. So when I heard the announcement in church that the first rehearsal of the fall was to be the following Wednesday, I took note and showed up.

I now sing from folder #6, in the back row over the air conditioning vent. After the children’s message, I still need a nudge to remind me it’s time to go up and sing. But when we lift up our hearts, and our voices begin to blend, and the Word goes forth on a magic carpet of song, something deep in me begins to smile.

*Footnote to “Hearts on Fire, Brains on Ice”: Dennis M. Williams, conductor, delivered this charge to the choir and orchestra prior to a performance of the Brahms Requiem in Dubuque, Iowa, March 31, 1974. I still have the program, which lists me as . . . a violinist.

Ken Rummer, a recently retired PC(USA) pastor, writes about life and faith from the middle of Iowa by the High Trestle trail.