My time as a Lutheran leader 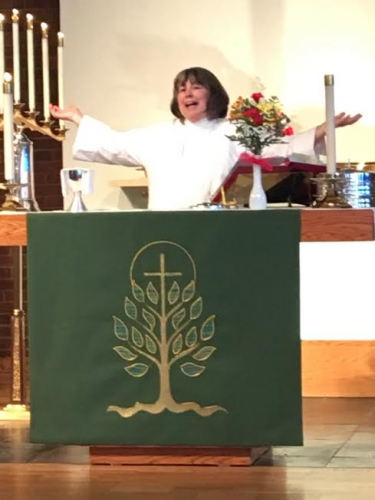 It wasn’t exactly an exchange program—there was no trade involved. But for the past fourteen months, I served an ELCA congregation as its interim pastor. It was an unexpected adventure in my call as a teaching elder in the PC(USA).

Our maybes became yeses and the adventure began.

My first day, the church secretary and the facilities manager, two women who were to become beloved members of my posse of supporters, cornered me in the office to ask if I were going to sing the liturgy.

“Am I going to do what to the what?” I gasped. “No no no, no singing, chanting or any other musical solo by this pastor!”

They conducted me through two rehearsals of the Sunday communion service, and I thought we were good to go.

That first Sunday morning, the congregation looked at me in a befuddled sort of way after I asked them partway through the service to be seated. I proceeded with a prayer and then, noting their puzzled expressions, asked if they were accustomed to standing at that point. They nodded in unison. “Feel free to revolt!” I exclaimed, “if I ask you to do something out of the ordinary.” Lutherans, as it turns out, stand for all prayers and the gospel reading . No one at all had mentioned that — because why would they?

I never quite grasped the niceties of the liturgy. Months later, I looked up from the pulpit during a service and thought, “There they go, standing up again!” I don’t recall why I was so confused on that particular day, but confusion was not an unusual state of mind for me.

I ran into a bit of a personal theological challenge over communion. I have long been a proponent of a completely open table, but the ELCA is serious about First Communion classes for, in our case, fifth graders. I helped to teach one of the classes, trying to leave the Lutheran doctrine to our Christian Ed Director. Insofar as worship was concerned, I took the position that I was their guest, and that it was incumbent upon me to respect and uphold their traditions.

On my very last day, a tall fifth grade girl shook her head resignedly at me when I tried, as I had almost every week, to serve her communion rather than to bless her. We laughed and shared a hug. “Too bad!” she said at the reception later that morning. “I’m in the First Communion class this spring. You’d finally be able to serve me for real!”

Confirmation was another learning experience for me – a two-year-long weekly class for seventh and eighth graders! I had a lot of fun getting to know the kids and their teachers, sharing in the conversations, and even teaching a thing or two. The church called its new pastor as we reached the Old Testament – finally, a strength for me! – but we did have a good time last year discussing whether God has a gender and what life after death might entail.

I wondered about preaching and pastoral care before I arrived. Should I read some Lutheran sermons? What about that phrase that I had occasionally overheard associated with Lutheran theology, “law and gospel?” Would the congregation expect anything unfamiliar to me where hospital visits and funerals were concerned? I talked to couple of Lutheran colleagues, found out what questions to ask, and concluded that I’d do best by preaching as I am called to preach and showing up as I am called to show up.

I don’t know about the law part, but we had a gospel-filled year. Much laughter over our distinctions without a difference, some fascinating theological discussions, some adaptations on all sides, and a lot of mutual love. I’m so grateful to have said, “Well, OK, let’s give it a try!”

Mary Robin Craig is a PC(USA) Minister of Word and Sacrament currently serving as interim pastor to Bethesda on the Bay Lutheran Church in Bay Village, Ohio.She is also a trained spiritual director and frequently teaches as an adjunct in the Theology and Religious Studies Department at John Carroll University.