Today’s been quite a day. First of all, that crazy man down by the tombs was at it again last night — cutting himself, throwing himself on the ground, howling so loud we could hear it from town. How could we be expected to sleep through a racket like that? Then, this afternoon, a couple thousand pigs stampede down the hillside and into the sea. We rush over to figure out what’s going on, and — get this — there’s the crazy man.

Except he’s not crazy anymore.

He’s sitting there like a normal person. Folks say that this Jewish guy showed up, pulled demons out of him, and sent them into the pigs. Who does he think he is? Who’s a foreigner to say that one dirty outcast is worth thousands of our valuable livestock? That Jew needs to hit the road. Now.

Jesus, forgive me when my selfish priorities blind me to the work you’re doing. Restore a right spirit within me. 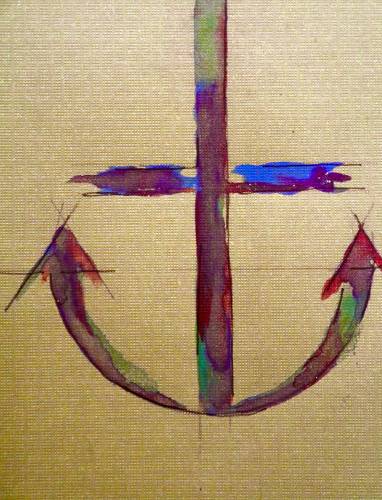 The ancient symbol of the anchor dates back to the first-century Christians, who often found themselves fleeing Roman persecution. Taken from the passage in Hebrews 6:19, the anchor symbolizes the strength that we have in Christ for our entire being.