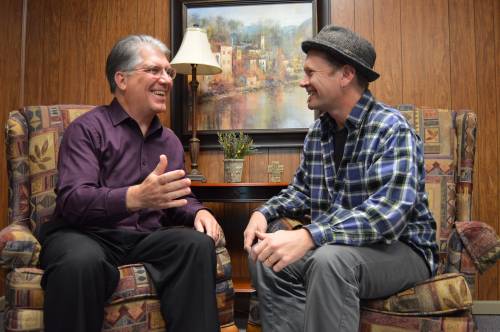 PC(USA) pastor (left) Ken Rummer was surprised to find himself as a spiritual advisor to a man on a beer fast for Lent.

The proposition took me by surprise. “Would you be my spiritual advisor?” J. Wilson, the editor of our weekly newspaper in Iowa had just been describing the medieval practice of certain monks who only drank beer during Lent, and how he, a home-brewer and self-described beer geek, was going to attempt to duplicate their feat.

He was planning to fast for Lent consuming only beer and water. The beer was a special recipe called Doppelbock, made with more grain than usual. He and a friend would brew up a big batch for the occasion. He had a medical advisor on board, and now he was asking me to be in his corner on the spiritual side.

To understand the awkwardness I was feeling, you need to know that he was not a member of my church, and that, aside from a rare sip of champagne for a wedding toast, I don’t drink. Beer and spiritual had never crossed paths for me before. If only one of my parishioners had asked me to serve as a spiritual advisor during Lent… And yet, here was an honest seeker asking me to use my best gifts in a ministry situation. I said yes.

We ended up with a weekly get-together in the church lounge. I would ask my spiritual advisor question: “Where have you noticed God in the week just past?” He would describe visions and discoveries or the lack thereof. And how he was feeling. And what it was like so far. It’s hard to be wise on demand, so I did a lot of listening. I would offer a reading, a scripture, a prayer for the journey. Occasionally something I said struck a chord and made his blog. That was part of the project, a series of blog posts documenting the experiment. Were the old stories just the stuff of legend, or could a person really subsist on beer for the whole season of Lent?

The blog turned into a book, Diary of a Part-Time Monk. If you want to get his take on the adventure and learn how he kept his full-time job going for the duration, check it out.

No, he was not continually drunk for seven weeks. Pacing and spacing was involved, and he did manage to complete his quest. He broke his fast just after midnight early on Easter Sunday morning with a bacon smoothie, and he and his family were in attendance later that morning for our church’s celebration of the resurrection. As I remember, he wore a tired but satisfied smile, and, though it may have been only in my imagination, or in a further accretion to the old story, a little extra light seemed to shine out from somewhere deep inside him.

We mostly went our separate ways after that. He took a job promoting independent brewers in the state, and I went back to pastoring my flock in more traditional ways. But some years later, when I was asked to play my violin for an hour-long yoga class at the nearby winery, I said yes, again.

Rev. Ken Rummer recently retired from First Presbyterian Church, Corning, Iowa. He writes about life and faith from the middle of Iowa by the High Trestle Trail.