Narrating life as it goes

My three year old sits in his carseat and incessantly talks all the way to preschool. Everyday. It makes me crazy. It’s too early for this, and he’s distracting me from the NPR newscast.

But, he never relents. He’s gotten to the point where he quizzes me after he tells me something,“did you listen mom? Mom? What did I just say?” There is no other way out than to patiently listen to his stories.

Narratives are constantly spinning through his three-year-old brain. Sometimes they’re even true. “Remember that one time yesterday when we went to that museum and we saw those dinosaurs and I pretended that they could talk to me? That was so awesome.” “That onetime yesterday” is a common phrase of his. We’ve determined that it really means that “yesterday” is any time in the past. In his mind, yesterday was just a minute ago, and six lifetimes ago. 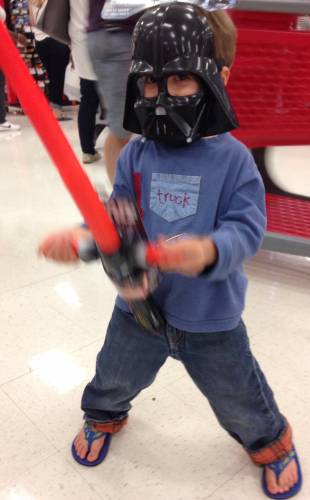 Kids know that stories are part of life.

And he even narrates the present moment: “Mom, there’s dog poop on our sidewalk. We shouldn’t step in it because that would be so gross. We just walked around it and now we’re getting in to the car. Isn’t that so awesome?” When he tells stories, anything is possible. The sheep from the nativity set all pile on top of each other in a “snuggle puddle.” He feeds baby Jesus some cooked fish while he’s lifting his hands and looking all angelic and laying in the manger. Joseph goes to work to teach the college kids while Mary goes into her “cloffice” (closet-office, as we like to call it) to work on her sermon.

If I give him my full attention, and am not distracted by Facebook fights and apocalypse producing tweets, it is delightful. If I can enter in to the game, into the story, his story, we laugh and we discover and I learn a tiny bit more about who this little person is turning in to. But, true confessions, I’m often too distracted trying to convince myself and others that I am right about some thing. It’s usually a thing that is divisive and controversial and emphasized for the sole purpose of maintaining our own perspectives in our own “correct” social bubbles. But we get in to the arguments anyway. We throw Scripture bombs and fact bullets and aim our retweets and reposts like tanks along the boarder. We never really get anywhere. No connection is ever really made. We just gather up our anger and self-righteousness into our overstocked arsenals.

These arguments are often about some theological issue. Infant or believer baptism?

Communion from one loaf or gluten free options?

And, as is timely, the historical accuracy of the Jesus infant narratives. Was there really a census? Did they really go to Bethlehem while Mary was eight months pregnant to register as a distant descendent of a once powerful Hebrew king, all at the behest of the Roman Emperor? What’s true in this story? What’s been proven? What can we know?”

The other day, my son was begging me to play “fight” with his superheroes. This usually consists of a lot of “kazams” and “kapows” and then ends up with Superman and Batman and The Joker going to the park for a picnic. And I was sucked into a Facebook fight. Pressing “reload” every thirty seconds, preparing counter-arguments and gathering applicable links, reading for the counter-attack.

And then, suddenly, my friend with whom I have considerable disagreements began to respond with a bit of his story. A piece of his life. A narrative that he  connected with the issue at hand. And I stopped in my rapidly typing fingered tracks. It was a centering moment. Or, rather, a re-centering moment. I was pulled out of my computer screen haze. I started to watch my son whooshing his Spiderman over the couch cushions he’d set up to make his metropolis.

He was creating a story about how the good always wins, even when the bad guys are distorted clowns and have bombs full of toxic laughing gas. His imagination is forming a narrative of what this child sees as true in the world. Two stories, one from someone’s direct experience, the other from the imagination of a typical three year old boy. Two narratives, one from memory, the other from the sacred depths of a little boy’s imagination. Both True.

This season, I want more stories. I want to be immersed in the narratives that make us who we are, that recenter us away from the tangled, narrowed, clogged up pipe gunk that keeps us thinking of ourselves as righteous, for sure, but also keeps us stuck, while the fresh water flows right past us. Maybe playing superheroes and hearing life-stories and reading both the Matthew and the Luke accounts of the birth of Jesus will remind us who is the living water, who is the one who came to us through flesh and blood and story, and wandered around Galilee, changing the world with his stories. 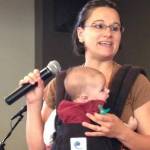 Jennifer Frayer-Griggs is the Table minister and pastor at Hot Metal Bridge Faith Community in Pittsburgh and mother of two boys, Jonah (7) and Levi (3).