Patience and the Praying Mantis

“Dear God, let me run toward, rather than away from, correction. Reduce my pride, increase my humility, and help me be malleable to good advice. Amen.”

That’s a prayer from the book The President’s Devotional by Joshua Dubois.* I have started to use it now as my prayer for the current President-Elect of the United States of America, along with scripture and a prayer for all of us, too. Join me? 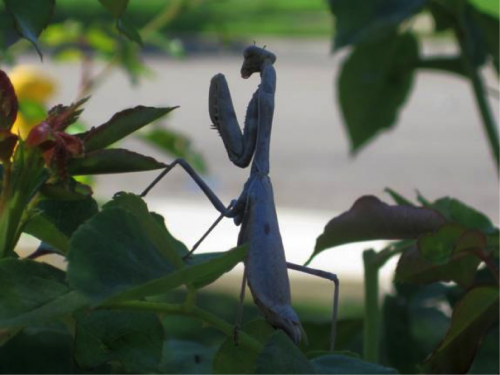 I therefore, the prisoner in the Lord, beg you to lead a life worthy of the calling to which you have been called,  with all humility and gentleness, with patience, bearing with one another in love, making every effort to maintain the unity of the Spirit in the bond of peace. Ephesians 4: 1–3

The praying mantid (popularly called mantis) is often overlooked as a beneficial insect. Mantises are an organic gardener’s friends as they eat insects that are destructive to plants. The mantis’ protective camouflage usually mimics the environment in which they live. One afternoon I watched a mantis in my garden as it patiently lay in ambush.

It was easy to see the prominent front legs held at an angle suggestive of prayer. I was also privileged to see the mantis swivel its head 180 degrees. The unpretentious praying mantis evokes the many meanings of humble, one of them being low in height, small in size. Making or counting as low all of one’s worldly achievements and accomplishments is unpretentiousness, like Jesus, when he came to the world, humble, making no show or display of his greatness but choosing to be born poor and lowly.

The active practice of humility is one way of promoting unity in the church. Every human being is created in the image of God. Humility recognizes the God-given worth in every person and treats him or her accordingly. By being humble we respect other people, instead of trying to overpower and maneuver them to gain respect and status and prestige for ourselves.

It is not at all easy to be humble with others; to recognize their God-given worth does not come naturally. We are so much more socially conditioned by the world than we realize. We crave the respect of others and too often try to get it without even realizing what we are doing! Only the grace of God can help us be humble, but we can cultivate patience, eagerness, zeal and willingness to promote unity of the Spirit in the bond of peace.

Prayer: I pray for the grace to walk in a manner worthy of my calling, like my Savior Jesus Christ. Amen.

*Sometime, in the fall of 2013, I stumbled across a news story about a book of daily presidential devotionals that was about to be released. A millennial, Joshua Dubois, appointed by President Obama to be the Director, White House Office of Faith Based and Neighborhood Partnerships, had also been writing him, on his own time, a daily devotional. I was impressed by not only the writing discipline, but the act of love that this signifies. Prayer is an act of love and writing a devotional is a form of prayer too. And I wonder if anyone will be writing a daily devotional for the PEOTUS, a self-avowed Presbyterian. I hope someone from the church will. 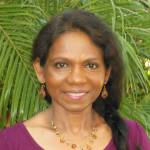 Anita Coleman is a wife, mother, and scholar. This post is modified from her 30-day devotional The Garden of Grace: A Daybook of Faith and Healing, Anita serves on the boards of the Presbyterian Writers Guild and Presbyterian Women.