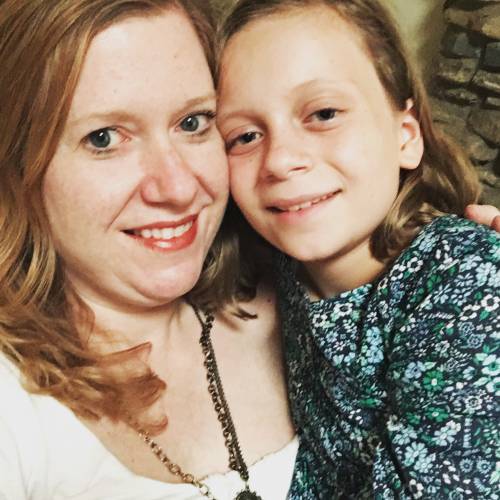 Robyn Sekula with her daughter, Anna, 10.

As we made our 30-minute commute, my 10-year-old daughter Anna asked me a stunner of a question. “Do people believe in God more or less as they get older?”

Anna is prone to deep questions. She is my quietest child, usually tucked away conspiratorially with her older sister, Abby, working their way through their bookshelves, talking about what they’ll read next, or watching cat videos on her iPad mini. She, along with her two sisters, attends my Presbyterian church with our family, as well as my husband’s Catholic church, and a Catholic school. Our faith is a casserole of both of our shared beliefs, our family of five centering our faith more on how we treat others than any particular religious organization’s doctrine.

I explained to Anna that every person’s answer to this question is different. I find that I believe in God more, in some ways, now that I’m in my 40s and have children. “I see God in how you treat each other, and in the love you show and the way that you care for the world,” I explained. “But I don’t believe anymore that God is a magic sky genie. I don’t believe you pray to God for things, particularly material possessions, and are rewarded with them because you pray.”

Ok, in all fairness, I probably wasn’t that eloquent in rush-hour traffic. But, more or less, that’s what I think.

I told Anna about some friends who had experienced great loss, and how that had clouded their view of God and they weren’t quite sure there was any God any more. I told her though that some people could experience that same event and feel that the only thing that got them through was their belief in God. I explained that faith isn’t a linear progression – it waxes and wanes and waxes again, depending on what we’re experiencing in our lives, our own personalities, and many other factors.

This question bounced around in my consciousness for days. I mused on how to better answer her question with a wider variety of responses. My Facebook friends, in particular, are a wonderful mish-mash of atheists, Jews, agnostics, Presbyterians (lots and lots of Presbyterians), evangelical Christians, Catholics, Mormons, Buddhists and Baptists. I decided to do something crazy in our deeply divided country: I asked my Facebook friends if they believed in God, and if they believed more or less as they got older.

I set down three rules:

The discussion was absolutely riveting, and unfurled over the course of two days. My atheist friends told me how they arrived there, one indicating she had been raised in highly religious household and had eventually run as far away in the other direction as she could get. Another atheist said God, or any sort of higher power, simply defied logic and he just could not understand how anyone could believe.

A Mormon friend who was a later-in-life convert to the faith described her journey to the church. Evangelical friends didn’t really expound on whether or not their faith had ever waned, but they talked in depth about their beliefs.

Jewish friends confessed that they weren’t really sure if God existed, but their culture and life were still very steeped in the faith of their family. 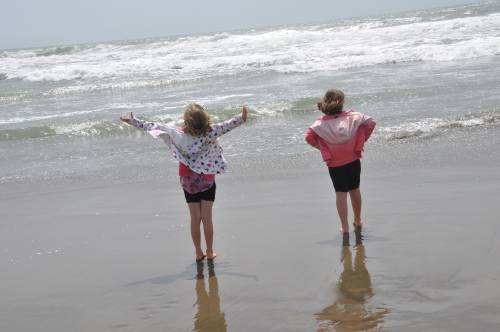 Anna, left, approaches life like she approached her first touch of the Pacific Ocean in 2014. She’s ready for anything and not afraid to ask tough questions.

Funny thing: I’m friends with a lot of pastors. They didn’t wade into the discussion. It turned into a conversation among people who were all nearly equally educated in the subject of faith, which made the discussion, to me, all the better. No one felt they had the upper hand, or used alienating language. Only a few quoted Bible verses, and only one person really tried to nail down what everyone thought the one true church was on Earth. Nope, I told her, not here. She respected my boundaries.

Here’s a few of my favorite answers:

“I believe rather simply that the energy of God is the goodwill in the world,” says a journalist friend in Atlanta. “The way when you’re having a crappy day and someone smiles at you at the gas station – that’s God. That’s how miracles happen. When enough good people share good energy, we heal as communities and families. It’s really just that simple.”

“I can say that my faith hasn’t changed from when I was old enough to grasp what that was to now,” says a recently retired friend who lives in the Louisville area near me. “What HAS changed is my participation in and automatic acceptance of rules and rituals and human or organizational interpretations of what is ‘right.’”

My friend Matt Friedman, a Rabbi who lives in California, came through with a particularly lovely thought that resonated with me. “God is unknowable and that is good. God is beyond our comprehension. As we get older, we have more experiences and can learn from the experiences of others…In the long run, it is not whether or not we will figure out God, but the important part is that we have engaged in the thought process.”

I don’t have a concrete answer for Anna. I rarely do. She asks me all manner of questions, using me as her own personal Google, and intensely relies on me to tell her the truth. The truth about God is that yes, I believe, but what I believe today is likely not what I’ll believe tomorrow.

What I really want for my daughters is to keep asking the questions, keep thinking, keep wondering. It’s the thought process that makes us human. People trained to listen and think can have a great discussion about God in a very divided world.

If that isn’t a miracle, I don’t know what is.

Robyn Davis Sekula is a communications consultant and speaker living near the Louisville, Kentucky. She a ruling elder in the Presbyterian Church (U.S.A.) and the Membership Chair of the Society of Professional Journalists. You can follow her on Twitter @itsRobynwithay.