Behind the scenes at General Assembly

Track humbly with your God

If you’ve known me for even three seconds, you know that I’m a diehard polity wonk. I’m fascinated by what I like to call the “mathematics of human relationships” – the systems by which diverse people from diverse backgrounds and diverse situations come together and engage with one another. (Or at least try to.) So when I was asked to come on board as a Committee Assistant at GA222, I jumped at the chance.

I thought it would be great fun to see how the proverbial “sausage was made” at our denomination’s largest event. Now that my Committee Assistant duties have been completed, I have time to tell you about my experience.

Yesterday morning, I tweeted out this picture of the backstage crew. 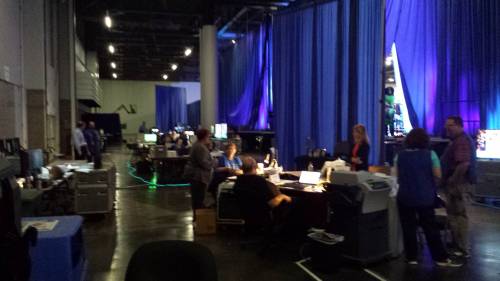 The tweet was “It takes this much work for things to look effortless.”

This whole week, I’ve been blown away by how much work goes on that commissioners and observers never even know – or, because they’re doing their job so well – think about.

Yesterday afternoon, three people led an entourage onstage, presenting Grayde with his own bobblehead doll and a shirt in his (now retired) trademark shade of orange. If you’re a commissioner, and especially if you’re at GA for the first time, you probably have no idea who Kathy, Kerry, and Jim are. But they’re incredibly important. You can think of it this way: if I’m a polity wonk, they’re the polity gurus. They’re the Yodas to my Luke Skywalker. Their job is to make sure that nothing slips through the cracks when we’re considering items of business at General Assembly.

They answer stupid rookie questions with grace (I’m, um, speaking for a friend); they treat everyone who approaches them with dignity and respect, regardless of theological, political, or social leanings; and they defuse potentially fraught situations with easygoing humor. Because they know the ins and outs of General Assembly better than anyone, they’re pretty unflappable – at least from what I saw this week. And because they do their extremely complicated job so extremely well, you’ll most likely never know they’re there. Those matching shirts say it all: “Track Humbly with Your God.”

It’s made me realize just how great a debt of gratitude I owe the “humble trackers” in my life: the people who are willing to put their hearts and souls into acts of service that most people will never know about, but without whom the whole kit and caboodle would go down in flames.

I have no doubt that these are the kinds of folks Paul was talking about in 1 Corinthians 12:20-25 (those “inferior members of the body” to whom God gives “greater honor”). They’re the unsung heroes, the individuals who fulfill their callings not for the accolades they’ll receive, but for the good of all whose lives will be affected by their actions.

So Kathy, Kerry, and Jim, thank you for your energy, intelligence, imagination, and love. I want to be just like you when I grow up. 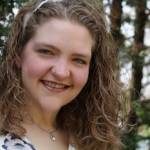