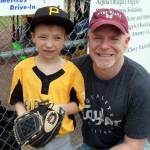 We Americans love our heroes. In some cases, that designation is well-placed. A soldier giving his life for our country. That one teacher who made all the difference. But, all too often, our choice of heroes seems to be about attaching unrealistic expectations to people who have achieved notoriety, then taking delight in watching them fall. We can also follow this pattern with those we call role models. I could name several right now off the top of my head, and so could you. But let’s not go there.

And how about saints? I’m guilty of cultural conditioning here, too, because the person who instantly comes to mind is Mother Teresa.

Two observations: 1) clearly, we must need heroes, role models and saints since they occupy such a prominent place in our lives, and 2) we often don’t see ourselves among them – those folks are “out there” and we’re “over here”.

You probably won’t be surprised to learn that the Bible sees these roles differently.

Scripture lifts up a number of heroes. I’d like to briefly consider three – Jacob, Stephen and Paul:

Jacob, considered the patriarch of the Israelites, is a key character of the Old Testament, although not always an honorable one. He resorted to lying, cheating, and manipulating. In fact it wasn’t until after he physically wrestled with God and lost the match that Jacob finally yielded to God. This was also when God renamed him to Israel, which means “struggles with God”.

Stephen, my namesake, is best known for his death by stoning, by order of Saul of Tarsus. The bible tells us that Stephen did great things – great wonders and miracles – was accused of blasphemy, and at his last, interceded to God on his killers’ behalf. Stephen seems a hero of fairy-tale proportions.

Which brings us to Paul, a major author of the New Testament. Our beloved Paul is none other than Saul of Tarsus, who ordered the death of Stephen and terrorized Christians prior to his conversion experience on the road to Damascus  (www.whatchristianswanttoknow.com).

Do you sense a theme here regarding biblical heroes? These legendary characters are not heroes because of anything extraordinary that they did on their own. They are heroes because of their ultimate obedience to God. And for some, that was clearly a struggle – just as it is for us.

We – all of us – are called to be heroes, role models, saints in this world. Not by performing heroic acts or being perfect, but by kneeling before our Lord and Savior and discerning God’s will for our lives. In other words, we need to check our egos at the door, and check our fears and sense of unworthiness at the door, and let go and follow.

My son, Sam, age 6, is the second of our two children, both of whom are adopted from Kazakhstan. Sam is exuberant, never met a stranger, and has an eye condition where his eyes drift outward causing him to see double. This spring, we decided to sign Sam up for baseball. Sam clearly needed to be placed in the beginner group but, holding fast to age rules with no exceptions, the league refused, placing him in the next level up. Papa Bear here was not happy, but we decided to try taking him to practice and see what would happen. Sure enough, Sam wasn’t anywhere near where the other boys were in ability and we decided to not move forward. That is, until we met Sam’s coach, Jon. Without question, Tonya and I believe that God placed Jon in Sam’s life. From the beginning, Jon had a heart for Sam and Sam adored Jon. Jon asked us to not pull Sam, reassuring us that he would work with Sam right where he is, whatever it takes, and that kids like Sam are what brings him joy. Now mind you, Sam could not catch, could throw a bit and struggled to hit a baseball off a tee. And this is the level of league play where the coaches pitch to the children. Well, Jon’s middle name must be Job, and little by little, Sam began to come along.

And then, while I was with a team representing Living Waters for the World at the United Methodist General Conference in Portland, OR, my thoughtful wife sent this surprise via text:

To Sam, Jon is a hero, to Tonya and me, he is the definition of a role model and to all who know Jon, he is a modern-day saint. And Jon? He just believes he is doing what God calls him to do.

And that’s the message for us all. The bible tells us that we are all saints. All of us, the body of Christ, Christians, the church. We are all saints and at the same time are called to be saints.

In subsequent conversations with Coach Jon, I can tell that he and I probably differ on matters of theology and politics. Now ask me how much any of that matters to me. Not one bit. What matters is that God sent Jon into my son’s life and helped Sam feel good about himself and forever changed the trajectory of his path.

Friends, that’s what matters most. God calls us to enter into relationships with all people – not just folks like ourselves – and if Jesus’ ministry is any indication, particularly with people not just like ourselves. We are equally in need of the water that never leaves us thirsty. When our Living Waters for the World teams are out in the world forming partnerships, God is at work in those relationships. Christ is encountered – face to face.

To borrow a quote from Linus of Peanuts fame, “That’s what Christmas is all about, Charlie Brown!”

Steve Young is the executive director for Living Waters for the World, a mission resource for the Synod of Living Waters.