But not for the reasons you think

I might be a pastor of a small church. I say “might be,” because I honestly have no idea what constitutes a small, mid-sized, and mega church. I’ve heard it said that a mega-church is any church with 1,000 or more members. Fair enough. But it seems to get murkier from there.

Then, of course, there are those – with some merit – who argue that the numbers on the rolls matter less than the numbers in the pews. Interestingly, both old churches where an astonishing percentage of the rolls actually attend andchurch plants that are just getting started tend to favor this metric.

A sort of compromise might be the percentage of the people on rolls who actually attend. I don’t know.

Size should be more indicative of a church’s agility and flexibility rather than its worth and value in the Kingdom. 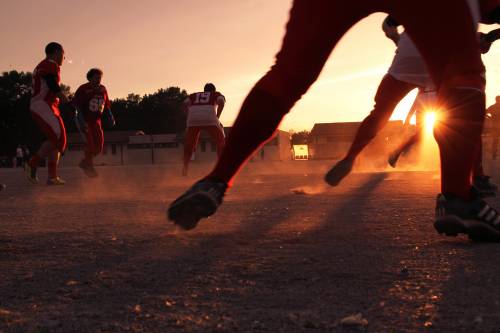 Fans of old school NFL – before drugs, abuse, and scandal shook the league to its core – will remember the Detroit Lions’ running back, Barry Sanders. Sanders also had reason to worry about his size. He was 5’ 8” and 200 pounds on the field. Compare that to Bo Jackson who was  6’ 1” and 230 lbs. Or Eric Dickerson at 6’ 3” and 220 lbs. Barry Sanders was tiny, too small for pro ball. He could be easily knocked over by 260-pound, blood-thirsty linebackers. He was told he’d never make it.

As any football fan knows, Barry Sanders is one of the greatest running backs in both college and professional football. He’s third all-time on the rushing leaders list. He holds 34 NCAA records. He’s part of the prestigious 2,000-yard club for rushing for over 2,000 yards in a single season.

How did he do it? He took his liability and made it an asset.

He knew he was too small. He couldn’t run through someone. But he could move quick. He could run forward, dart to the left, make a man miss, spin out of the next would-be tackler, and then turn on the afterburners to sprint 40 yards for a touchdown. See for yourself.

What if small churches took on a Barry Sanders mentality? What if they (we?) started viewing the would-be liability as an asset? What if, instead of trying to grow bigger and stronger, we focused on being quicker, faster, more agile, more flexible? What if we gave up bodybuilding for cross training?

We live in a world of mega-this and multi-national that. We’ve seen all too often how large, powerful institutions often labor under the pressing weight of bureaucracy. Remember FEMA’s failure in New Orleans? Remember the reports of Red Cross not mobilizing in Haiti? Are you watching now as an entire continent struggles to deal with the refugee crisis of one, small country?

Bigger is not always better.

Now, this is an ironic column for me to write. I am, personally, big. I’m tall and round and have often found virtue in my size and strength. I get, in other words, the temptation toward making size matter. Even still, I have a friend who is a 5’8”, 120 pound yoga instructor and is so much stronger than me. She can get into “Warrior Three” pose because her size is her asset. I some times struggle to get out of “Couch Two.”

I’ve clearly been using a lot of metaphor and analogy because I’m first and foremost hoping to inspire excitement around small sizes. The first goal of this column is to get members of small churches amped up about who they are, rather than being apologetic about it. But there is a dark underbelly to being small. There are, of course, temptations.

The first temptation is to buy into the world’s assumption that bigger is better. We could call this the “F650 mentality” (to switch metaphors). It is to believe the world’s accusation that if you’re small then the best you can hope for is to grow. The world will never tell you what it fears is true: Smaller can be better.

Avoid this temptation by trusting that you’ve been made the size you are for a reason. Then watch Barry Sanders juke – breaking the ankles of an over-sized protein mass – and get about doing the same.

The second temptation is to make excuses. This is probably the biggest temptation. It sounds like this: “Well, if we had more people, we could probably help out?” or “If we just brought in three more young families, we could use them to build a children’s ministry” or “One Great Hour of Sharing sounds great, but we can barely keep the lights on here!”

Remember that small communities of people ready to actually do something are always going to make a bigger splash than bureaucratically laden institutions.

What does this look like? It looks like claiming a small piece of your community for Jesus Christ and throwing yourself head-long into it.

Don’t have enough kids for a church youth like you had in 1972? That’s okay. Go to your local library and local grade school, get your clearances, start volunteering with children. That’s still youth ministry. Build relationships with the administrators, teachers, and parents. Make your affiliation with your church known. Don’t be weird, but don’t be shy.

Can’t give enough to One Great Hour of Sharing? Fine. Start a bake sale. Get a spot in the mall. Sell items, talk to neighbors, ask for donations. You’d be amazed how non-Christians can get motivated for Christian mission that serves the poor, hungry, and broken.

Finally, speak words of hope to one another. Every problem in the church begins with one person wringing their hands and another person not grasping those hands into a shared prayer. In fact, if you need any proof of the power of small churches, just look at the mountains of despair they can create. If mountains can be made by such a small contingency, then it is likely that they can also raise valleys up.

If I’m in a small church, then good. The mission doesn’t change regardless of the size, just like Barry Sanders’ goal every time he touched the football was the same as Walter Payton’s – get to the end zone, get your team six points, spike the ball. If you can’t get there by plowing through, do it by juking by.

Jeffrey A. Schooley is a teaching elder at Center Presbyterian Church in McMurray, Pennsylvania. He is also a PhD candidate in Theology at Duquesne University in Pittsburgh. Biking, Netflix, reading, teaching, and spending time with his wife and dog round out the rest of his life. He can be reached at ThinkLikeChristians@gmail.com.