Redefining where and when church happens 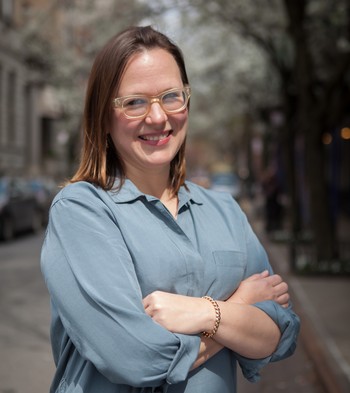 Jump!
What conquering a fear of heights taught me about being the church

I therefore, the prisoner in the Lord, beg you to lead a life worthy of the calling to which you have been called, with all humility and gentleness, with patience, bearing with one another in love. —Ephesians 4:1–2

“ONE!” “TWO . . . .” I was crouching on a stone wharf, five feet above the water and 15 feet above the ocean floor. Fists and eyes clenched shut, knees bent, I anxiously waited for the “THREE!” my mother-in-law would yell as my signal to tumble into the frigid Maine sea.

The plan was to confront my fear of heights by jumping into the ocean from this wharf.

This confrontation has become a family project. My mother-in-law counted from her porch, preparing me to jump: “ONE!” “TWO!” And before she could reach “THREE!” I would remember all of my fears: flying through the air with nothing to catch me. Hitting the water with my back, and the pain that would cause. Breaking my legs on the bottom of the ocean floor. Dying.

That was this past August.

The last time I tried to jump was about a year before that. I had grown fascinated by a trapeze school close to our apartment. Some friends took me there for my birthday. Ready to go, having read and followed every instruction in the fine print, I knew, as soon as I stood on the top of the parking garage overlooking the Hudson River with the sun setting in front of me, that this was perhaps the worst birthday idea ever.

I had flashbacks to the last jumping experience, hooked up with gear and rappelling into a cenote, an ancient, sacred sinkhole, in Mexico. I stood at the top, feet firmly planted on the dusty earth, tears streaming down my cheeks, my friend Manu dangling in the air in front of me, looking me in the eye, and encouraging me one inch at a time to remove my feet from the ground and let the gear hold me in mid-air, too.

Manu’s encouragement was crazy talk. What sane human being does this, trusting a few ropes, air, and a friend to hold you up? Eventually my feet did leave the earth and float down, with a close-up of stalactites on the way. It took my breath away.

‘Christianity isn’t about feeling good; it’s about healing and teaching us so that we can learn how to love as an act of the will rather than as a Hallmark emotion.’

So a year ago again, I stood ten feet above a net, all hooked up with rappelling gear, overlooking the Hudson with my knees bent. On the count of three, I was to let go, swing holding a bar, throw my legs over the bar, release my hands, and then somehow LET GO and fall into the net. Instead the tears began to roll, the breath hard to catch, and I screamed “NO!”

I had learned in self-defense classes that my voice is my strongest weapon. Perhaps it would get me down, I thought. But I was too far off the platform to go back and climb down the ladder, and so the woman assisting me, with little patience for my antics, pushed me off the board. “NOOOOOOOOO!” I screamed, my body extended stiff as a board. She told me I had to let go of the bar that was holding me in mid-air and drop into the net. “NOOOOOOOO!”

The problem was that there was only one way down, and I had to do it. After a lot of encouragement and reminding myself that this was the only option, I let go and fell, caught by the net.

And so a few months ago I crouched over the sea, knowing that at the sound of “THREE!” I had to jump in, hoping that that word three would propel my body forward.

G. Porter Taylor writes in Daily Feast: Meditations from Feasting on the Word, Year B that “love is not an emotion; love is an act of the will. Paul is not calling for the early Christians to feel warmly toward one another, but to act according to their calling.”

I don’t know where my phobia comes from, other than a long-held need to exert control on a world that is too dangerous and chaotic for my taste.

And maybe that’s not a bad thing.

Christianity isn’t about feeling good; it’s about healing and teaching us so that we can learn how to love as an act of the will rather than as a Hallmark emotion. The church is to prepare us to be present in the chaos of the world around us, to be faithful disciples of Jesus the Christ who entered into spaces that the world deemed unsafe, deemed lost causes and of little value. Instead, the church is to prepare us to jump and be present with us in our jumping, to confront our fears of change, and disruption, and the unknown. The church is to lead us into unchartered waters, all the while keeping our eye on the sunset, and the stalactites, and the beauty of cold salt water hitting our skin.

Mieke Vandersall is the founding pastor of Not So Churchy and a fundraising consultant with Wingo, Inc. She lives with her wife and their dog in New York City.