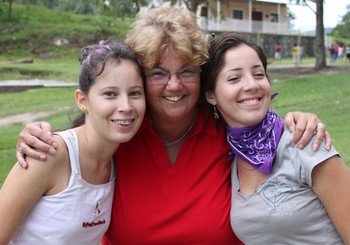 Discerning fact from fiction on the refugee frontlines
A mission-experienced Presbyterian reflects on the arguments for and against resettlement.

A fellow Presbyterian had felt the need to correct my understanding of the plight of thousands of Central American mothers and children incarcerated in detention centers here in the United States. I was in San Antonio attending a Presbyterian Disaster Assistance training on refugee asylum and resettlement. He warned me not to “drink the Kool-Aid.”

During my flight home, I was counseled by another man to be careful—not to be taken in by the special interest groups pressuring our country to get “squishy” on illegal immigration.

“The government needs to be vigilant in these dangerous times.”

The second gentleman was pleasant and listened as I shared my discoveries of some of the harsh and inhumane immigration policies and procedures. He then played devil’s advocate for ICE (Immigrations and Customs Enforcement). As he shared his perspective my spirit warmed a bit to the cadre of Washington bureaucrats, border officers, immigration legal prosecutors, and judges whom I had come to brand as villains.

“My friend’s a father of Latino descent,” the man confessed. “I’ve seen him shed tears for these folks. But the law is the law.”

He patted my arm. “There will always be room in this country for legal immigrants.”

During the same flight, I also talked with a woman whose significant other is an ICE agent. She shared glimpses of the underbelly of the process, pointing out that agents often track down the asylum seekers who skipped out on their legal obligations. 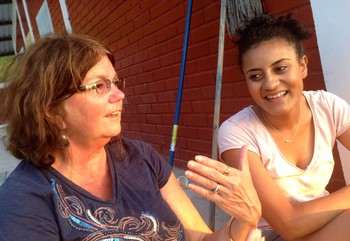 Roberta Updegraff, left, speaks with a youth at the Honduran orphanage Hogar de Niños Renacer where she volunteers.

The consensus of my three encounters was that folks emigrating from south of the US border will do whatever it takes to “jump” ahead in the immigration line. Yet, all three spoke enthusiastically for immigration—legal being the caveat. And they did not trust our government to honor the immigration policies already in effect.

Drinking the “Kool-Aid” seemed to mean accepting what the media and government told us carte blanche. “Nothing is as it seems,” one man told me.

And from personal experience, I know he is right.

The Central American women and children incarcerated in detention centers (as far as I have been able to discern) have presented themselves at the US border. They have legally requested asylum because they fear for their lives or those of their children. They are not illegal aliens. They now reside in prisons and detention centers across the United States awaiting a decision on their refugee status.

Having been involved in an orphanage in Honduras for many years, I know firsthand that Honduras is home to vicious gangs. I know mothers who are afraid for their sons and daughters. I know small business owners paying extortion money to avoid brutal retribution from gang lords. One Honduran woman, who has become like a daughter to me, mourns the death of her older sister and her children, assassinated in their family home because the boyfriend reneged on a gang-coerced obligation.

I also know, as faulty as they are, the legal system and the social services here in the United States trump the possibilities for justice in countries like Honduras. We are a big-hearted people—all of us descendants of immigrants from the ends of the earth. Yes, we sometimes are frightened and overwhelmed, retreating into protectionist mode. Yet, even as we become more insular, we remember.

We remember the history of our own immigrant families.

Many of our faith-based organizations evolved through their participation in refugee resettlement ministries, including Presbyterian Disaster Assistance.

Although European Jews had been admitted to the United States under the combined German-Austrian quota for 1938-1941, the United States did not actively pursue refugee resettlement for the thousands, and thousands more, Jews requesting asylum in the later days of the Holocaust.

The last survivors of the Holocaust are octogenarians, so we are now decades removed from the corporate shame that pressed our hearts to “never forget.”

Because of what happened to European Jews the Geneva Convention of Refugees was drafted and ratified. We (the United States and the United Nations) then rallied to receive the teeming masses from a ravaged Europe after World War II. 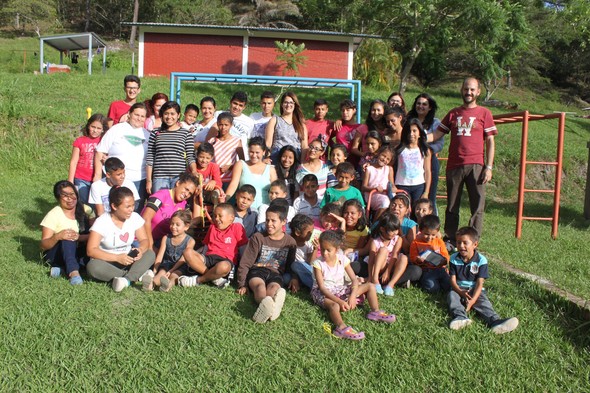 We rallied in the following decades to receive the huddled masses yearning to breathe free from the Communist Bloc countries. Operation Peter Pan (1960-1962) relocated more than 14,000 Cuban youths to the United States.

Then in 1978–79, when hundreds of thousands of Vietnamese fled the country’s “re-education camps,” the United States took in many of the refugees. Years later it would become the tempest-tossed Haitians who would capture our generosity. Our policy would later become convoluted as the numbers fleeing Haiti swelled and then most were turned away or detained and returned. However, the first wave of Haitian refugees did qualify for asylum.

Each time we engaged in national dialogue. We addressed the pros and cons—and each time, we opened our “golden doors” to those seeking a safe harbor from the storms that raged in their home countries.* Each time it was the faith-based community that sounded the clarion, stood in the gap, and advocated for the newest immigrant.

Asylum seekers from Central America have walked, hitched an illegal ride on a Mexican train, and traveled cramped together in trucks and vans to make the 2,500-mile trek to surrender at our border.

Today immigrants from Central America and the Middle East face persecution, and as with my Irish ancestors, their quest is to build a future here in our country. That future will be fraught with angry protest and belligerence. But as Christians, let us once again sound the clarion for this humanitarian crisis. Let us once again stand in the gap for the newest “least of these” in the kingdom. And, yes, as the church, our response must be honorable and honest. We must obey the law while we petition to change it.

Quite possibly amongst these newest asylum seekers is another Albert Einstein, Alexander Solzhenitsyn, Marlene Dietrich, or Miriam Makeba. But undoubtedly these newest refugees will actualize their dreams while adding their accomplishments to our American legacy—the legacy made possible by our immigrant ancestors more than 200 years ago.

So, let us once again do what we do best—offer our hand of hospitality.

Roberta Updegraff is the author of six mysteries with Guidepost Books and was featured in their compilation Prayers for Every Need. She writes regularly for Presbyterian Disaster Assistance’s Mission Mosaic, and her photographs have been featured on the cover. Her work has appeared in diverse publications including Christianity Today and Focus on the Family. She and her husband support Hogar de Niños Renacer (Home of Reborn Children), an orphanage in Honduras where Roberta volunteers several weeks each year. They live in northern Pennsylvania. Visit her website.

* Editorial note
The storms these refugees flee are ones that we, in the United States and the West, have admittedly at times helped stir (considering our legacy, for instance, in Central America, especially our support in the 1980s of violent paramilitary groups, such as the contras in Nicaragua). This fact complicates the belief held by some that refugee assistance is a voluntary act of charity and not a recognition of our own contributions to systemic poverty and violence. Make no mistake that the United States has been perfectly content to meddle in the sovereign affairs of Central America when it has been judged to be in our own interest. Some judge this complicity from the vantage point of politics, others from theology (our shared inherited sinful nature), and yet others from both.