An avid movie buff walks in the footsteps of Russell Crowe and many other famous actors and directors at Ghost Ranch. 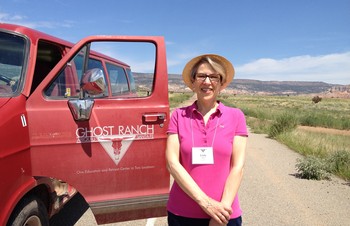 All the pretty movies
An avid movie buff walks in the footsteps of Russell Crowe and many other famous actors and directors at Ghost Ranch.

Stepping out of the van that had transported me from the Albuquerque airport—and from that other world, North Carolina, where my journey originated—to the vistas, mesas, cliffs, and skies of northern New Mexico, I had fully expected to walk in the footsteps of dinosaurs, native peoples, spiritual pilgrims, legendary Presbyterians, and even Georgia O’Keeffe, who for many years made Ghost Ranch her summer home and spent the last 50 years of her life living in the area.

No, I never expected that at Ghost Ranch I’d walk in the footsteps of Russell Crowe. Or Cate Blanchett. Or Daniel Craig.

Did I mention Russell Crowe?

Not that I’m star-struck—well, perhaps I am, just a touch. I’m an avid film enthusiast and movie-trivia contest winner, who got into the habit of memorizing closing credits from a very early age, sitting in the dark long after the rest of the theater-goers had gone home. Just ask me the names of the most celebrated cinematographers, composers, and editors of any number of films. Just ask me, but only if you want to get into a long conversation.

The year after I graduated from college, I visited nearly every cinema in Hamburg, Germany, while doing graduate work in film and comparative literature at the university there. Most memorably—and shamelessly—during that year of study abroad, I walked right up to Reinhard Hauff, director of Knife in the Head (Messer im Kopf) in the middle of an Udo Lindenberg concert and told him how much I admired his films. “Who me?” he asked, visibly nonplussed that someone had recognized him.

Later in life, after becoming a Presbyterian teaching elder, I became a disciple of Ed McNulty, the Presbyterian pastor, veteran film critic, editor of the Visual Parables Journal, and author of several books designed to help movie viewers make the connection between faith and film. Since then, I have continued to happily exhaust the world’s cinematic oeuvre, while leading retreats on faith and film in congregational settings.

So when I was assigned this past summer by the Presbyterian News Service to cover the annual Family Week conference at Ghost Ranch Education & Retreat Center—and found that the Ranch offered a movie sites tour—I immediately signed up. Someone must have known I was coming.

We were a small but deeply fanatical group—cell phones and digital cameras at the ready—eager to have our pictures taken at some of the sites where Russell Crowe led his band of outlaws in the 2007 film 3:10 to Yuma. 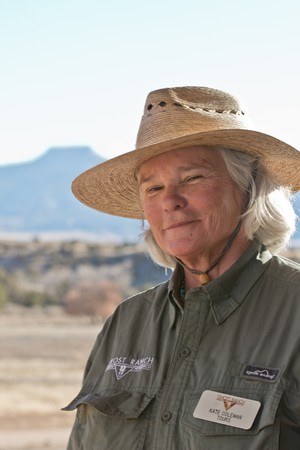 Our gifted tour guide, Kate Coleman—a paragon of patience and a font of film knowledge—snapped photo after photo of us as she led and gently humored us through the terrain and the movie backstories she knows so well.

A daughter of Ghost Ranch, Coleman first visited the property in 1964 and has returned almost annually ever since. A double “PK” (preacher’s kid), she is the daughter of two San Francisco Theological Seminary graduates, Ann Brooks and J. Bruce Coleman. As a student, Coleman served on the college staff at Ghost Ranch during the summers of 1974 and 1975. Even her 1979 wedding—not captured on film, that I know of—was officiated by Jim Hall, the first executive director of Ghost Ranch under its present Presbyterian ownership.

Since her retirement from a career primarily in health physics, Coleman has been a guide of the Ghost Ranch Movie Sties Tour and the Georgia O’Keeffe Landscapes Tour for the past four years.

Knowing that Presbyterians live to amass papers, Kate thrilled us with a handout entitled, “Movies of Ghost Ranch,” with the following introductory paragraph:

Ghost Ranch has a long history with the movie industry; many actors and directors have worked here to produce countless films and commercials. Maybe that’s why many guest feel so drawn to this place; they have seen it before they arrive.

A list of the movies filmed at Ghost Ranch naturally begins with the first movie ever filmed there, The Light that Failed (1939) with Ida Lupino, Ronald Colman, and Walter Huston.

Other notable films—posters of which hang proudly in the Ranch’s welcome center—include Silverado, Young Guns II, City Slickers, All the Pretty Horses, The Missing, Indiana Jones and the Kingdom of the Crystal Skull, and, of course, 3:10 to Yuma (2007).

Did I mention Russell Crowe?

When Coleman offered to take our photos at one of the 3:10 to Yuma sites, we took turns holding up a photo of Crowe and his gang astride their horses. When I looked at the back of the photo, where the actors’ names were listed, I hesitated briefly but couldn’t stop myself from telling Coleman there was an error.

“Err, that actor is mislabeled,” I told her. “That’s Dallas Roberts, one of my favorite character actors.”

“Well,” she told me, with infinite patience and sincerity, “you can give this tour when you retire.”

Retire? If I could walk forever in the footsteps of dinosaurs, Presbyterians, O’Keeffe, and Crowe, that day can’t come soon enough.

Emily Enders Odom is a mission communications strategist for the Presbyterian Mission Agency.