In the wake of the tragic Chattanooga shooting, Muslims and interfaith partners come together to send a message of hope. 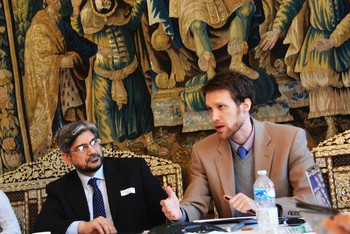 Theologies of fear
In the wake of the tragic Chattanooga shooting, Muslims and interfaith partners come together to send a message of hope.

Two years ago I sat in a room crowded with 300 angry people and 700 more outside shouting, as I nervously whispered, “I’ve never been in a room where I’ve felt so much white Christian rage.” My colleague, a pastor from Pulaski, Tennessee, nodded as I straightened up in my chair.

The crowd had come from surrounding states to this small community forum in Manchester, Tennessee. They came to protest the forum’s concern for hate crimes against Muslims. National Islamophobic groups had bussed protestors in from hundreds of miles away, carrying messages and signs based on an ideology (some might say, theology) of bigotry. And they were truly angry, flashing their handguns and shouting down panelists. This was in the summer of 2013, but the memory still reminds me—a former PC(USA) Young Adult Volunteer—why I moved to Tennessee to work on an interfaith public education effort to end anti-Muslim sentiment.

To be clear, these weren’t people who wanted to discuss the complexities of interfaith engagement while holding true to our particular faith claims. There are many people in this country who want to talk, for instance, about what interfaith relations mean for evangelism, or why a small number of Muslims today are turning to terrorism, without generalizing the Muslim community or wanting to see harm done to them. These were not the people at the forum, however. One thing alone had brought them to Manchester: fear.

It’s that fear that I’m trying to change. One of my colleagues recently said, “This work is something you can’t get away from; it chooses you.” It’s true—my work in Tennessee is driven by a calling.

Interfaith work is the patient commitment to reweaving the relational ties that constitute our communal life to create a more just and equitable community. The touchstone of this work, for me, is founded in stories of Christ crossing dangerous boundaries to heal social ills. I believe that multireligious collaboration can correct injustices in our society and, in turn, draw us deeper into our own faith traditions.

That doesn’t mean, however, that it’s easy.

On July 16th earlier this year, I was with a group of community-college professors (addressing how to correct student misconceptions of Islam and American Muslims) when I heard about the shooting in Chattanooga. My heart went out to the victims and their families, but the implications of the shooting didn’t register at first. It took a comment from my Muslim colleague to wake me up: “This feels exactly like it did when the mosque was bombed in Columbia. You get that lump in your throat; it keeps slowly rising.” He swallowed, trying to settle himself and perhaps recalling the series of attacks on American Muslims that followed 9/11.

‘Islamophobia . . . is the product of that worst mix of evils: bad theology and racial prejudice. We Christians are missing out on a call to reconcile a world that is becoming increasingly embattled, divided, and unjust.’

Four marines were killed that day in Chattanooga by Mohamed Abdulazeez. The fifth, a naval petty officer, died the following Saturday. The attack took place in an environment where race and religion matter tremendously. For the last 14 years in Tennessee, the Muslim community has experienced fire-bombings, vandalism, and political campaigns meant to smear and tarnish Muslim Americans’ civil rights.

While the shooter’s motivations remain unclear (drugs, depression, and attitudes toward the US government all reportedly played a role), what is clear is that this act of terrorism drove even deeper the wedge of fear that separates Muslim and non-Muslim communities, a chasm that the media and special-interest groups were more than happy to widen. Coverage often expanded the perceived difference between Muslims and non-Muslims, offering instead a fantastical story of all-out war.

We must not accept these terms of engagement; communities built on fear and prejudice are not communities. As a Christian invested in this work of reconciliation, I feel that Christians have a duty to reject narratives that incite fear and instead, to embrace love.

The days after the attack were filled with interviews and vigils, marches and meetings. My organization, Religions for Peace USA, worked tirelessly alongside countless others to create safe public spaces for grieving and healing. Muslim colleagues were on numerous radio and TV shows and in newspaper articles across the country denouncing this tragedy, while fearing for their own families’ safety against retaliation. As one colleague said, “Attacks like this are every Muslim Americans’ worst nightmare.”

Our largest effort, a multifaith fundraiser led by the Muslim community in Tennessee, raised more than $22,000 for the victims’ families. It’s in such moments that we remind people that Muslim Americans know what it means to be a part of the community and are stepping up to prove it.

Islamophobia in part stems from a notion that something violent exists inherently in Islam. It stems from irrational, racialized fears of anyone who “looks Muslim” that compound rational fears that arise from a growing number of lone-wolf extremists, as the Southern Poverty Law Center has recently reported.

The Our Muslim Neighbor initiative believes that Islamophobia is bad for all of us. It is the product, I am convinced, of that worst mix of evils: bad theology and racial prejudice. We Christians are missing out on a call to reconcile a world that is becoming increasingly embattled, divided, and unjust.

The Christian call to end Islamophobia begins with an understanding that we are all equally at-risk in a world that is built on racial and religious prejudice. All of us have a stake in creating a better world. In a time when the world seems to be getting smaller, and increasingly unstable, there are opportunities for everyday people to get involved. Across Tennessee I know evangelical pastors, Sikhs, Hindus, Muslims, and a wide swath of Christians who are taking action and standing in solidarity to work for a better community. In the wake of the Chattanooga shooting, messages of hope, such as the United for Chattanooga Families message, strengthen the bonds of community. We need to be reminded why this work is urgent and important and how we cannot rest until all are seated at the table, our Muslim neighbors included.

If you want further information on how to plug into this work, you can visit these sites:

Aaron Stauffer is the executive director of Religions for Peace USA where he oversees all projects and initiatives while working with more than 50 communities to inspire and advance common actions for peace. He is a graduate of Union Theological Seminary in New York City and a former PC(USA) Young Adult Volunteer. He most recently worked as an organizer with the Industrial Areas Foundation, working to build public power within disenfranchised communities. His work in the interfaith movement included positions with the World Student Christian Federation, the World Communion of Reformed Churches, the Coexist Foundation, and the Presbyterian Church (U.S.A.).