Seeking transformation through the renewal of our minds

Lessons in adoption
How pet ownership is good training in discipleship

We Christians sometimes forget something: we are adopted. All of us. We have been redeemed and adopted by God through the atoning sacrifice of Jesus Christ. Yes, yes, you say, but what does that mean?

This is precisely where pet adoption comes in.

According to the Humane Society, “In 2012, 62 percent of American households included at least one pet.” This means that pet ownership is the primary way most of us will come to understand adoption.

These reflections come—in part—from the wonderful July/August 2015 edition of Presbyterians Today (did you know you can get a free subscription?). But more importantly they come from River, my 10-year-old Chesapeake Bay Retriever/Lab mix (who probably also has a little pit bull in him somewhere).

My wife, Brianne, and I adopted River in July 2007—one month after we got married. I write this column on the eve of his Adoption Day into our family. And my first lesson in adoption and discipleship came on his first night with us.

Brianne and I had spent about two hours at the adoption shelter, the Animal Rescue League of Western Pennsylvania). We—well, at least I—had come to adopt River (Brianne thought he might be too big). When we got there, he was on a walk and so we opted to meet with other dogs. They all came into the meeting room, avoided us, and peed in the corner. River was different. After sniffing around a bit and adding his deposit to the urine cocktail, River settled down beside us and let us rub his soft belly and marvel over his velvety ears. I think the ears won Bri over. Some paperwork and 70 dollars later, we were headed home. But it was late. So we ran through Kentucky Fried Chicken and brought our meal and dog home together. Halfway through the meal, I needed a napkin and set my plate on the coffee table in the living room. I was three steps away when I saw River bolt for it. I bolted too. I grabbed him just before he got to the chicken bone on my plate. And that’s when I realized that life with a dog would change forever. 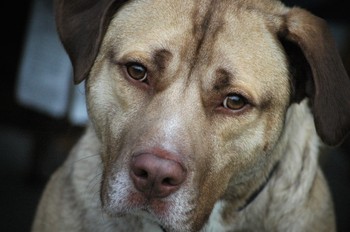 Over the coming months, I slowly realized that River’s instinct to go for the chicken bone wasn’t just some animalistic craving. No, River had been a stray on the streets for many months before he was found. He had learned to eat trash and drink dirty water. His bathroom was everywhere, and every puddle of mud was his bath. So, even though we bought him expensive dog food, he often went for our trashcans. River had learned the identity of a stray and it would take time for him to re-learn his identity as a beloved, adopted “son.”

And isn’t this true for all of us? None of us knows—really—what it means to be adopted as co-heirs with Christ in his kingdom. There is no referent in our individual or collective histories for such a richness and blessing. And so without understanding who we are—and therefore what we are to do—we revert back to the ways that have (sort of) worked for us before. We still think of ourselves as strays, unloved, uncared for, and we act accordingly—fighting with one another over the scraps of this world, believing in scarcity, not abundance, in survival, not grace.

No matter how many times River went after that trashcan, however, Bri and I still loved him. We never kicked him out of the home. We never gave up on him. He may not have, at one time, been ours (hence the adoption), but he was now, and nothing was going to change that.

The fact that this was his “forever home,” that his adoption did not come with conditions (though it certainly did come with expectations), began to change River. And just as behaving like a stray could not go on for River, neither can we, adopted by God into our forever home, live like those still alienated from God, whom we must now call Abba, Father.

The metaphor goes on and on. In each stage of our life together with River, Bri and I have learned better what our life in Christ means.

Working various jobs and odd hours meant that we weren’t always able to give River a consistent bathroom schedule. We never left him in anguish, but the schedule would always vary. River’s life consequently was not always predictable. Maybe sometimes he worried that we weren’t coming back. But we were asking River to trust us, to be obedient to us. To have faith that we would return before long (and therefore peeing on the carpet in Brianne’s office is a bad thing).

What a great lesson for our prayer lives! So often we bring in prayerful petition all that ails and concerns us, and—upon realizing that God hasn’t acted in the 15 minutes or so after we prayed—we go about trying to figure it out ourselves. And too often all that results is a mess that causes us to turn our faces away in shame. 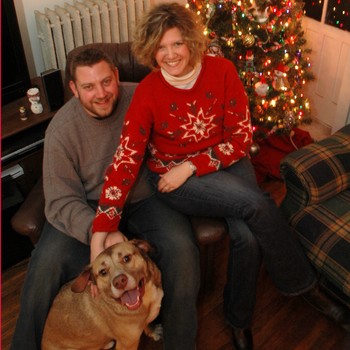 River has been a great dog, by and large. My friend and colleague in ministry, Jake, regularly reminds us that Brianne and I hit the dog-shelter-lottery with him. But this does not mean that River doesn’t misbehave. He has a propensity for destroying his toys, pulling the stuffing out of them, and—on occasion—eating that stuffing (which always leads to a surprising revelation on the next morning’s walk!). And it has been through scolding River that I’ve come to learn—at least in part—that correction is not abuse, that consequence is not the same thing as penalizing.

When River destroys a toy, we don’t run out and buy him a new one. He just goes without or has to play with the raggedy remains of the de-stuffed toy. So it often is with our own sins. When we prove ourselves poor stewards of some gift from God (oh, and adoption is a great reminder that all we have is a gift; just as adopted dogs don’t “earn” their toys, neither do we!), we ought not be surprised when that toy is removed from our midst. God loves us too much just to let us run roughshod over everything God gifts us (this metaphor is all the more pertinent when we remember that many of our “toys” are actually people and relationships that God also loves deeply).

Of course, the metaphor—like all metaphors—has its limits. Do not take from this reflection the idea that your deepest losses are punishments from God. Suffering doesn’t always result from our disobedience. Just as River’s suffering as a stray was the result of a broken world that failed to cherish him, so too are our tragedies the result of a hurting world over which God weeps as we do too. The worst any of us can honestly be accused of is the need for continual growth as God’s adoptive children—a process that takes time.

Throughout it all, we have slowly trained River to trust us—trust us with his “daily bread,” trust us with his bodily needs, trust us with his toys and pleasures, and trust us when we tell him he must go on a car ride (even though he gets car sick). And if I can try to get inside the mind of my dog a little, I realize that this trust comes because of our perpetual presence with him. We are there when he goes to sleep and when he wakes up. He crawls into our laps (all 85 pounds of him!) while we watch TV at night. And because of this, River doesn’t go for the trash any more. He knows his age-appropriate Science Diet food is on its way. He doesn’t (OK, rarely) go to the bathroom in the house. He has learned what it means to live as our adopted son and he has done so because he has come to trust our love for him. And this is the greatest theological take away from pet ownership.

We remember that if we’re ever going to love and trust God as much as our pets love and trust us, it will only be through the practice of perpetual presence. We must cultivate in our lives disciplines that help us perceive daily God’s unfailing presence.

As I write, I am sitting at my dining-room table. River is at my feet, occasionally shifting around, sighing, snoring—generally taking away my ability to stretch my legs. We have a rather large house. He has multiple pillows to lie on. But his desire, it seems, is to stay near me, because he knows that I love him and he loves me. My prayer for all of us is that we behave with Jesus Christ the way River behaves with me. And when we do, we will finally know the answer to the question, “but what does it mean?”.

Jeffrey A. Schooley is a teaching elder at Center Presbyterian Church in McMurray, Pennsylvania. He is also a PhD in Theology candidate at Duquesne University in Pittsburgh. Biking, Netflix, reading, teaching, and spending time with his wife and dog round out the rest of his life. He can be reached at ThinkLikeChristians@gmail.com.