Some Mosaic of Peace participants participated in an optional experience in Jordan prior to the start of the main conference in Israel-Palestine.  Rev. Rebecca Segers shares her insights from the experience. 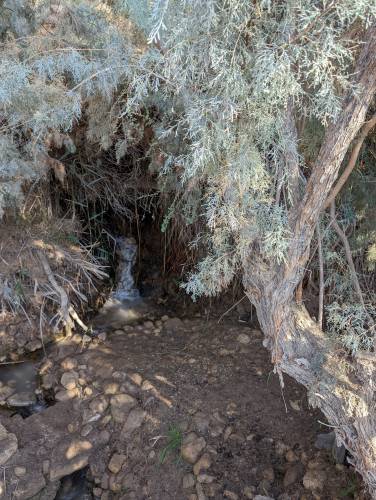 Gather ‘round, friends and hear a tale. A tale I had never heard before, yet one that has already moved me deeply on this pilgrim journey. According to the gospel of John, Jesus was baptized in Bethany across the River Jordan. In pictures and in my mind’s eye, I have always seen this as immersion along the riverbed, but in recent years, a new picture has emerged. One of Jesus baptized in a pool where two streams meet: the sweet, fresh water of the River Jordan and water whose source is deep underground, salty and mineral rich (that source is in the photo at right). Just how did this picture come to be? 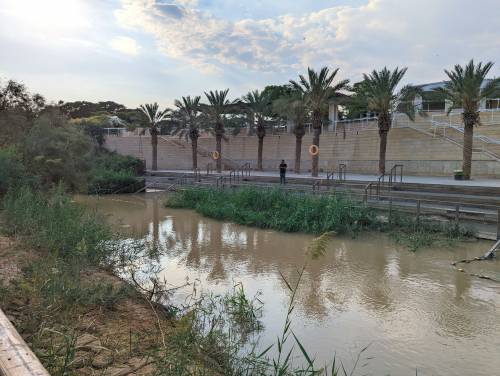 In 1897, a scholar from Jerusalem visiting Madaba, Jordan, discovered what has become known as the Madaba Map. This map was a 6th century mosaic depicting all the Christian pilgrimage stations from that era, among them a site celebrated as the place of Jesus’ baptism. Subsequent analysis of the map led to renewed interest in the site, and pilgrims began to travel east of the Jordan River hoping for clues as to its whereabouts. (At left, the Jordan River from Jordan looking toward Israel.)

The story takes twists and turns for the next century and a quarter, traversing several wars, militarization, then demilitarization including a treaty that allowed for de-mining, and even a Crown Prince’s visit to the area. HRH Prince Ghazi bin Muhammed supported archeological digs based on information from local Bedouin tribes on their discoveries of pottery, mosaics, and marble. Most of this was found near a site known locally as “Elijah’s Hill,” the place where Elijah was purported to have ascended into heaven and dropped his mantle for Elisha. The hill also boasted a small cave where John the Baptist was said to have lived while he was ministering in the wilderness, eating wild locusts and honey, and calling on the citizenry to “Repent!” 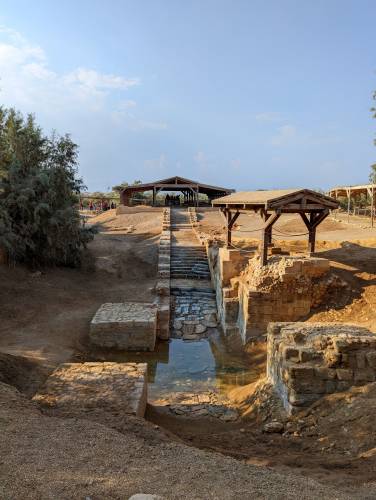 Further digging by archeological teams has unearthed two sources of water that merge in a pool (picture on the right) that fits beautifully with the Madaba Map and pilgrim writings as early as Origen in the 3rd century. Is this where Jesus was actually baptized? Who knows? I do know that the story of two streams merging, one salty, one sweet, sings to my soul as I ponder Jesus’ baptism and my own. In Matthew 3:11, John tells his followers that while he baptizes them with water, the one who will come after him will baptize them with fire and the Holy Spirit. This is the reality in life: it is hard and it is beautiful. To feel God’s presence with us in the wilderness, in the salty and the sweet of life, was all the more powerful in the place where it (maybe) happened. There is no “maybe” about that.

Rev. Rebecca Segers is on an 18-day pilgrimage to the Holy Land with the PCUSA Mosaic of Peace Conference.