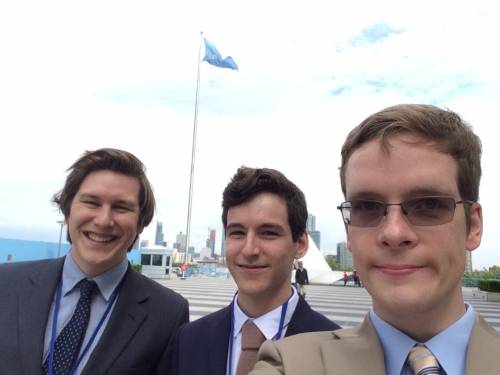 Benjamin Jacuk and Nick Gallagher with Matt Cowell who took them on an introductory walk through of the UN grounds. (Photo by Matt Cowell)

As summer begins in New York, the Presbyterian Ministry at the United Nations enjoyed a busy week.

On May 22, Mark Koenig, director, preached at the Church of Reconciliation in Chapel Hill. Matt Cowell, Young Adult Volunteer, talked about his work with a youth group from the Presbyterian Community Church of Massapequa.

Nick Gallagher began his service as a summer volunteer intern on May 23. Nick hails from Appalachian State University.

Rabbi Arik Ascherman, president of Rabbis for Human Rights, spoke to the Israel-Palestine Working Group and interested Presbyterians in our conference room on May 24.

Ryan Smith, Presbyterian representative to the United Nations, represented the ministry, Ecumenical Women, and the Presbyterian Church (U.S.A.) at the Requiem Eucharist for the Rev. Joan Fraser Grimm. One of the first women ordained in the Episcopal Church, Joan was a fierce advocate for women’s rights and a wonderful colleague in Ecumenical Women.