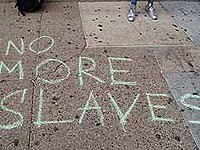 December 2 marks the International Day for the Abolition of Slavery. It is a day that focuses on “eradicating contemporary forms of slavery, such as trafficking in persons, sexual exploitation, the worst forms of child labour, forced marriage, and the forced recruitment of children for use in armed conflict.” This goal is of particular note for our campaign, since out of the estimated 21 million forced labor victims worldwide, an estimated 4.5 million of which are victims of forced sexual exploitation. According toUNiTE, 98% of these sexual exploitation victims are women and girls.

Violence and sexual exploitation in particular has serious health consequences for women and girls, including unintended pregnancies, induced abortions, sexually transmitted diseases, and risk of depression, PTSD, and dependence on harmful drugs.

Be a part of the change that seeks to eradicate and prevent all forms of slavery from happening, of which women and girls are extremely vulnerable. Speak out and spread awareness of the horrors that go around the world. Advocacy is a powerful force, and we can make a difference in people’s lives that has lasting impact on future generations.

Consider partnering with the 50 For Freedom Campaign, a worldwide movement aimed a ratifying the International Labor Organization’s Protocol on Forced Labour. The protocol requires the ratification of 50 states before it enters into force; to date it has received only 2 ratifications.