reprinted from the blog of the Rev. Gradye Parsons, Stated Clerk of the General Assembly

I can count on one hand the number of times I have spent Christmas in my own home as an adult. We have shared that day with grandparents and other family. In a pre-Amazon era, we hid presents among the luggage and spent those days on the road just like Joseph and Mary. But of course I knew that my bed was there to welcome me when it was all over. 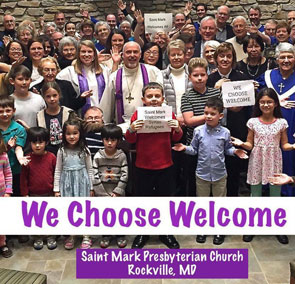 Right now the United Nations says there are more than 60 million people displaced on our war-weary planet who will probably never see their home again. That’s the largest number ever recorded. They have left their homes because of violence, poverty, and fear. There is a story repeated around the world. Some armed men come to your house. They demand money from the parents. They demand that the son joins their gang. They want to sell the daughter into the sex trade underworld. You can’t go to the authorities because the gang is the authorities. What do you do as parents? You flee with your family.

As a church of 1.6 million people we can’t take in 60 million even if our government allowed it. But we can help change the way people talk about the 60 million. I recently put out a Facebook challenge asking congregations to take a selfie with a We Choose Welcome banner. The challenge was to send the photo to their public officials. One congregation that accepted the challenge is St. Mark Presbyterian Church in Rockville, Maryland. I want to give them a shout out.

Maybe your congregation is not ready to go on record on this issue. But sometime over the next Advent days we are going to once again bash the innkeeper for having no room for Joseph and Mary. So perhaps that can be a teachable moment for all of us.

Note that the Rev. Dr. Roy Howard, pastor of Saint Mark Presbyterian Church in Rockville, MD, reports the congregation sent a copy of the photo with a letter to the governor of Maryland.