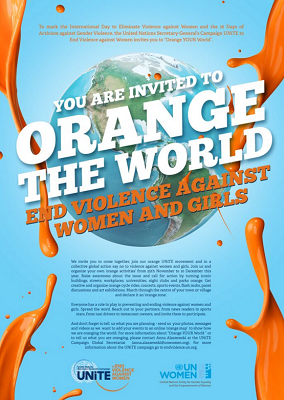 Orange the World! Welcome to the first post of a daily series of sixteen that will be following the 16 Days of Activism Against Gender-Based Violence Campaign from November 25 through December 10. This year marks the 24th year of the campaign, coordinated by the Center for Women’s Global Leadership. 2015’s theme is “From Peace in the Home to Peace in the World: Make Education Safe for All!”

The United Nations Secretary-General’s Campaign UNiTE to End Violence against Women invites us to “Orange the world: End violence against women and girls” during this time period.

“This year, the 16 Days Campaign will focus specifically on the relationship between militarism and the right to education in situations of violent conflict, in relative peace, and variety of education settings, while continuing to make the links with militarism, as an encompassing patriarchal system of discrimination and inequality based on our relationships to power.” To read the full announcement and view more updates, click here for the campaign’s homepage.

To mark the start of this important campaign, November 25th is the International Day for the Elimination of Violence against Women. Violence against women is an important issue to address because of its cyclical, systemic nature. According to the United Nations, 35% of women and girls globally experience some form of physical and/or sexual violence in their lifetime. An estimated 133 million girls and women have experienced some form of female genital mutilation/cutting in the 29 countries in Africa and the Middle East where the harmful practice is most common. More than 700 million women alive today were married as children, which has detrimental effects on their ability to complete education and increases their likelihood to experience domestic violence and complications in childbirth. In effect, violence against women is a generational problem whose effects can still be felt for many years later.

This year, people from around the world will be organizing around this international day in the UN’s Secretary-General’s Campaign UNiTE to End Violence against Women in “Orange the World: End Violence against Women and Girls.” Would you considering joining the campaign and organizing “Orange Events” in your local area? For more information about the Orange Project and this international day, click here. Be sure to like them on Facebook and follow them on Twitter.