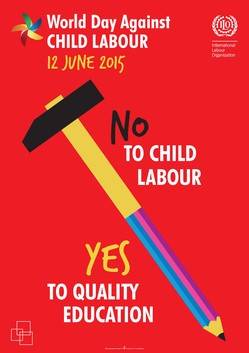 The following statement was made in June 2014 and is attributable to the President of the General Assembly at the United Nations (UN):

But in recent years we have made progress. Since 2000, the United Nations has reduced child labour by one third, with the fastest decline achieved between 2008 and 2012. By pursuing increasingly successful, integrated approaches – treating not just the symptoms of child labour but also targeting its roots, we have made prevention the heart of our response.

Imagine a world in which every child attended school and nobody was forced to work against their will. This year’s World Day theme “Extend Social Protection: Combat Child Labour!” stresses the central role of programs that reduce poverty and vulnerability.

I call on Member States to recognize that social protection is a right, one that is central to the task of ending child labour. We must work to ensure that children have access to basic resources including nutrition, health and education, so that they may fully realize their potential.

Today, worldwide, the International Labour Organization (ILO) estimates that 168 million children are victims of child labour. Child labour is classified as labour performed by a child who is under the minimum age specified for that kind of work, as defined by national legislation, in accordance with accepted international standards. Such labour can take manifest forms, the worst kind being work in hazardous environments, slavery, or illicit activities such as drug trafficking and prostitution. Characteristic of all forms of child labour is that it jeopardizes the physical, mental, or moral well-being of the child. Indeed, many victims of child labour do not attend school, nor do they receive proper nutrition or healthcare.

The ILO launched the World Day Against Child Labour in 2002 to focus attention on the global extent of child labour. In efforts to eliminate it, they have called for free, compulsory, and quality education for all children at least to the minimum age for admission to employment.

Presbyterians have long recognized the importance of education and have launched the Educate a Child: Transform the World initiative with international and national components.

The ILO has set 2016 as the target date by which to eliminate the worst forms of child labour. Significant progress has been made since the first Global Report on the subject four years ago. The challenge of the next four years will be for the ILO to work in a more focused and strategic way to act as the catalyst of a re-energized boll alliance in support of national action to abolish child labour.