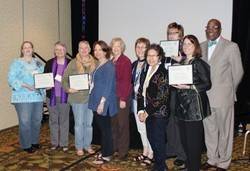 In a world of change and uncertainty, the Presbyterian Church (U.S.A.) is growing a loyal group of supporters to keep its peace and justice ministries thriving. Church leaders announced a new program called “Pillars of the Church” at Compassion, Peace and Justice (CPJ) Training Day in Washington, D.C.

“It is about encouraging a sustaining and generous community of donors who are deeply committed to the commandments of Jesus to love God and love our neighbor as ourselves,” said Sara Lisherness, director of CPJ. “Becoming a Pillar of the Church publicly demonstrates our support of justice and peace.”

The initiative was quietly launched last November with CPJ staff. Since then, nearly a hundred pastors, members, presbyteries, congregations and staff have committed to become a pillar. Church leaders hope it will build a strong foundation for its many programs and ministries:

“I am thrilled by the tremendous success of this initiative. This is remarkable in light of the fact this effort has been largely by word of mouth and intentional invitations asking people to make sustaining gifts to support these ministries,” said Lisherness. “Presbyteries see the ministries of Compassion, Peace and Justice as core to our Reformed faith.”

Hudson River Presbytery was one of the first to champion the initiative. With a strong commitment to social justice, the presbytery has worked closely with the Presbyterian Office at the United Nations and the Office of Public Witness in Washington, D.C.

“Speaking out on social justice issues is a key part of who we are as Presbyterians,” said the Rev. Rhonda Kruse, connections & change presbyter with Hudson River Presbytery. “These two offices are our voice in the public square and speak on behalf of the denomination. They provide incredible resources to help those in the pews understand the issues and find their own voice.”

Kruse said it’s unfortunate that funding across the denomination has dropped, forcing budget reductions within the ministries. Still, Hudson River has continued to drive the importance of supporting the work to the congregations.

“It was not a question of whether to become a pillar, but how soon we could do it,” she said. “We explain to our members that the denomination wants to continue the programs and ministries it offers, but the funding is just not there anymore. We have to do a better job of making sure those programs continue.”

Don Hepburn was among the first individuals to become a pillar. He spent most of his career in the Middle East as CEO of the Bahrain Petroleum Company, witnessing what he described as the growing oppression of Christians in the region with the rise of jihadism.

“I welcomed the freedom of religion I experienced during my time in Bahrain, but I could see things changing,” said Hepburn. “If you look at the course of human development over the past 200 years, Christianity has been the backbone of democracy and positive change in countries around the world. But Christianity is being pushed down now.”

After working in the Middle East and Europe, Hepburn retired in New City, N.Y., where he has been active in the Germonds Presbyterian Church for more than 20 years. He said he became a pillar to help change the course of a huge neglect in Christian values.

“There is a desperate need for the Christian voice to be heard,” he said. “Christians have lost their momentum to move forward. No matter where you look, the roots of progress emerged from Christian efforts and we need to restore that.” Germonds Presbyterian was the first Pillar congregation when they put Public Policy and Advocacy Ministries as a line item in their annual budget.

Individuals interested in becoming a Pillar of the Church can designate a monthly, sustaining or multi-year gift to support a specific ministry of Compassion, Peace and Justice. Gift can also be made in honor or in memory of a loved one.

Congregations and Presbyteries may become Pillars by including a specific line item in their budget that is designated for one of the ministries in CPJ. Individuals can make their gifts on line at .