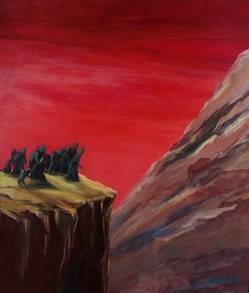 This year marks the 100th anniversary of the Armenian Genocide—the systematic massacre of one and a half million Armenians that began on April 24, 1915, and continued into the early 1920s. The 221st General Assembly (2014) of the Presbyterian Church (U.S.A.) called on congregations to remember this event in worship on April 26, 2015 (the Fourth Sunday of Easter). Read the full text of the PC(USA) General Assembly action.  The photo shows the painting “The Cliff” by Jerusalem-born artist Lucy Boyadjian Jangijian whose Uprooted Collection interprets the Armenian Genocide and the will to endure.