This story originally appeared in the Presbyterian News Service. Thanks to our colleague Rick Jones for writing this story! 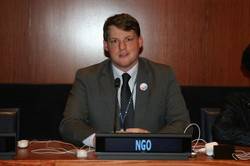 The Presbyterian Church (U.S.A.) made an oral statement yesterday to the 59th Session of the United Nations Commission on the Status of Women. Ryan Smith, Presbyterian representative to the United Nations, presented the statement during Wednesday’s General Debate session. For the past week and a half, the Commission has been reviewing achievements and challenges since the Beijing Declaration and Platform for Action, a major policy document on gender equality, was adopted 20 years ago.

After recalling the church’s long history of advocating for and working towards gender justice and pointing to the ordination of the first female elder in 1930 and first female minister in 1956, the statement lifted up the church’s call for a “focus on the intersections of gender, race, power, and privilege” during the 2008 General Assembly.

The statement emphasized the Presbyterian Church (U.S.A.)’s commitment and practice of working in partnership. “Recognizing our human limitations, celebrating the unique and valued roles of other Christian communities, and affirming our connections with neighbors of other faiths, Presbyterians answer the call to serve alongside others in the discipline of partnership. We believe that working in partnership broadens our awareness of how interconnected God’s mission is at the local, national, and global levels.”

Drawing on information provided by PC(USA) international partners and on conversations with ecumenical partners in the UN community, the statement asks United Nations member states and civil society to:

The vision that is ours in Jesus Christ resonates in the conclusion of the statement, “We envision a human community where the participation of each and every one is valued, where no one is excluded on the basis of race, ethnicity, social/economic class, sexual orientation or gender identity, age, religion, or cultural practice, and where diversity is celebrated as God’s gift to the world.”

Church leaders were pleased with the opportunity to enter the statement into the commission’s record, saying it is not an easy thing to accomplish.

“We are pleased the Presbyterian Church (U.S.A.) was chosen to deliver our statement from the variety of civil society organizations that applied this year,” said the Rev. Mark Koenig, Director of the Presbyterian Ministry at the United Nations. “We are grateful that our relationships within the United Nations community provide us with this and future opportunities to witness to world leaders.”

Ryan Smith noted, “Faith communities are the center of civil society around the world; in times of peace and in times of war, the faith community remains a pillar in the local community. UN Women Executive Director Phumzile Mlambo-Ngcuka reminded the world of the importance of civil society in her remarks celebrating International Women’s Day on March 8, when she stated, ‘We need collaboration with civil society, and a strong women’s movement in every country and in every part of the world. And we need civil society to continue to be the torch-bearers.’”

Thirty-six Presbyterian women, including 11 young adults, have been attending the 59th session of the commission. The delegation was organized through a partnership involving the Presbyterian Ministry at the United Nations, Racial Ethnic & Women’s Ministries and Presbyterian Women in the Presbyterian Church (U.S.A.).