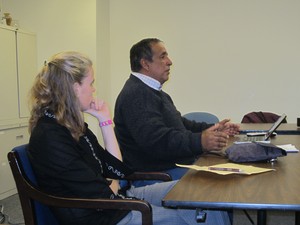 “There is nothing more revolutionary than the idea ‘love your neighbor!’’ Germán Zárate reminded the group who gathered at the Church Center for the United Nations on October 23, 2012. Germán, Director of the Diaconal of the Iglesia Presbiteriana de Colombia and the Rev. Mamie Broadhurst, Presbyterian Church (U.S.A.) mission co-worker in Colombia, spoke about the ministry of the church in Colombia.

The Iglesia Presbiteriana de Colombia, supported by U.S.-based partners, ministers to our sisters and brothers who have been displaced in Colombia. This ministry involves working to address the human rights crisis in the country and that includes responding to the Victims and Land Restitution Law that went into effect in January 2012.

Colombia has lived through forty years of war. There are “armed actors” everywhere one looks: guerrilla forces, paramilitary troops, police and soldiers. Oil and cocaine beckon the U.S. government, and our tax dollars are a complicated part of growing violence that destroys so many lives.

Internal displacement in Colombia causes serious humanitarian concerns. The number of people displaced hovers at 4 million. Under the Victims and Land Restitution Bill judicial and administrative measures were introduced to allow the victims of forced displacement to claim reparations and land restitution. However, the implementation of this law still remains a major challenge.

Germán and Mamie commented on some of those challenges. At the same time, Germán noted that the situation is quite simple: “Farmers who have been displaced want their land – to plant and to harvest.” The Iglesia Presbiteriana de Colombia supports displaced peoples as they seek to return to their land.

That hope extends to the most recent round of peace talks. “The people want peace,” affirmed Germán. May it be so.

Here are ways to learn more about our partners in Colombia, the PC(USA) response and the situation in the country:

The photo is by Sera Chung.