A full choir led a tribute to the heroes and victims of September 11, 2001 at the First Chinese Presbyterian Church of New York City.

The audience came for solace.  And they received that and more. 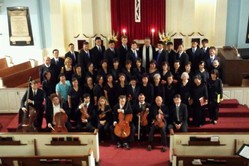 Led by a 30-member choir under the intense and passionate direction of conductor Yu Ong Celia, the performance of the works of Gabriel Faure (1845-1924) in Latin was superb. The full choir sang its hearts out.  Accompanied by the resident organist, Yu-Zheng Jiang, a violinist, three violists, two cellists, a bass, two horns, and four soloists, they  filled the sanctuary with the sweetest music.  Their pulsing voices ate the air within the walls.

From the first movement, I was totally immersed in the music.  During the Introit and Kyrie, the choir, accompanied by the organist and the orchestra, sang an earnest prayer to the Almighty to grant perpetual light on the departed.  The deep passion and expression in their voices touched my soul.

The organist introduced the second movement, the Offertory, with her exquisite touch on the keys and the voices of the altos and tenors blended in with deep heart-felt pleas to Jesus to free the souls from the depths of hell.

The fourth movement Pie Jesu was performed by soloist Ethan Moy in a sweet and gentle treble, with the earnestness and innocence of a child crying out a prayer to Jesus to grant everlasting rest to the souls who have gone to meet Him.

The tenors sang the fifth movement, Agnus Dei, in perfect harmony, making a firm and steady appeal to the Lamb of God to take away the sins of the world.

The Baritone Soloist, Basa-Ong, Gervacio ,Jr., sang the sixth movement, Libera Me, in his deep and powerful voice.  He sang of the Day of Judgment and the appearance of the Lord in splendor.  All the voices of the choir united with him to sing of the mourning, grief and vengeance on Judgment Day.

Finally, the sopranos ended the Requiem with a sublime prayer, In Paradisum, where God’s saints enter Jerusalem and rest in everlasting peace.

At the last note, there was an outburst of gratitude to the choir for its magnificent performance.  The choir and orchestra, the directors and conductors, had given their hearts to this event and the performance will be remembered long after.

Written by Peng Leong, Ruling Elder at First Chinese Presbyterian Church of New York City, and volunteer intern at the Presbyterian Ministry at the United Nations; photo by Peter Tam