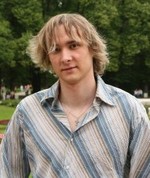 Each year the Presbyterian Peacemaking Program brings Christian leaders who are engaged in peacemaking in their own areas of the world to the United States. These International Peacemakers are invited to visit with Presbyterians in the United States and to help us understand the peace and justice concerns of others around the world.

Alexander Petrovich Lunichkin from Russia is one of the International Peacemakers coming this year. Here is a bit of his story.

Perhaps because it seemed so very far away, perhaps because it was yet one more act of terrorism perpetrated by an unknown group, perhaps because the place names were so unfamiliar, the 2004 massacre at School Number 1 in Beslan, Russia, received little domestic press in the USA and most people who heard the news have probably already forgotten the details.

It was the first day of school, on September 1, and more than a thousand children and their parents proudly entered the building to kick off another year. The children were dressed in their finest new outfits, many carrying flowers and other gifts from their doting mothers and fathers. For many, this day would be their last on earth.

Armed terrorists, both men and women, took control of the school and held teachers, students, and parents hostage for days without adequate food, water, or sanitation. On the third day of the standoff, Russian government forces stormed the building, resulting in explosions, fires, and a terrible toll of human life. More than 330 people died, more than half of them children.

Beslan is located in the territory of North Ossetia, a semi-autonomous region within Russia that, along Chechnya, Dagestan, Ingushetia, and other regions, has been struggling against Russia for independence. The inhabitants of these republics in the Caucasus mountains are largely Muslim and ethnically quite different from the Slavic Russians who control the territories.

Alexander Lunichkin and his family are Russian Baptists who minister in this area to the poor and needy. Through a program called “Light in the East,” they reach out, offering comfort and God’s love to those who suffer, as well as meeting other needs. Their connection to the Beslan tragedy cannot be overstated, as they were directly involved with grief counseling and other ministry to survivors of the attack. They interact daily with those still scarred by grief.

Alexander, who goes by the nickname “Sasha,” is a young man who has dedicated his life to Christian service. He fulfills many roles in the family ministry, including that of computer technician and Webmaster. He is well versed with the outreach programs of “Light in the East” and is prepared to speak on the issues of poverty in the Caucasus, the reality of continuing ethnic struggle in the region, and the relationship of the Baptist Church within Russia to the powerful Orthodox faith and all that entails.