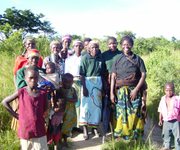 It’s this amazing thing about Malawi. You trundle over dirt roads through tire ruts and truck-sized gullies with maize leaves crowding in the window. You arrive at an old mission statement and there you find a six-year old kid on a cell phone to his mom.

We took the back roads out to our last project visit of the day on Monday, March 3—a garden started by a church to improve nutrition for people with chronic illnesses. At the other site visits, choirs of volunteers greeted us, waving and singing, but here there was only a woman hoeing a patch of soil in the midst of the maizefields.

When we pulled up, people started to come in—we had been expected hours earlier and the group had dispersed. What we got was not the celebratory ceremonial welcome of so  many places but a serious and direct conversation about the real issues people are facing.

The Rev. Kagodana introduced the volunteers from the support group and then Andy Gaston, the Livingstonia Synod AIDS Program (LISAP) Coordinator asked an unscripted question: “We sent caregiver kits a while ago. They had towels and medicine in them and they also had condoms. What did you think of that?”

Pastor Kagodana chuckled and then explained that at first they asked why a church was given them, because condoms were for adultery. But then they learned that condoms were also to protect married couples with one partner HIV positive and one negative and they were for preventing re-infection when both partners have HIV.

Then the questions started flowing in the other direction. The pastor asked when the mobile testing clinic could come to their area so that he and the elders could be the first in line to be tested and lead the others. The volunteers who served as caregivers for people with illnesses asked for more training opportunities. People wondered why food parcels, that had helped improve health and even boosted immunity for many, had come briefly but stopped after a few months. They showed enthusiasm and directness and as we talked, it became increasingly clear that they were doing their utmost with what they had as was LISAP.

Andy encouraged the trained volunteers to speak to their session and to train others. He commended the Rev. Kagodana on his forthrightness and enthusiastic leadership. When it came to the food parcels, Andy explained that they had come in response to a period of great need in 2006—by the time the food arrived, it was a year later and then, since it was a one time call for help, the food stopped coming.

The people were focusing on local, sustainable projects—like the vegetable garden—but I tend to agree with the sentiment that we need some donor education—to think about both self-sustaining projects and sustained commitment to partnership initiatives.

Who knew? Out among the maize stalks you’d have this committed congregation wresting with and tackling seriously and lovingly the challenges of their community.