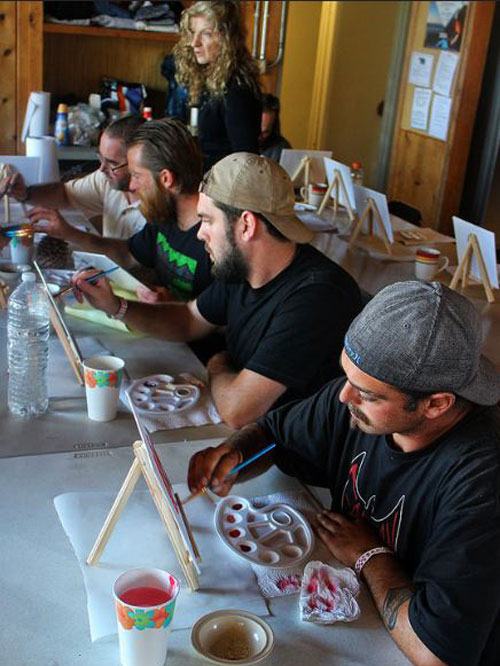 LOUISVILLE – Michael Pate, who is homeless, experienced what he couldn’t imagine last week.

“I never thought anyone could fall in love with me,” he said. “But I feel full of something right now. That’s the closest I can come to labeling it.”

In what is believed to be a first for a camp and conference center in the Presbyterian Church (U.S.A.), Zephyr Point on Lake Tahoe held a five-night healing and learning retreat for a group of homeless, physically and developmentally disabled people, and “at risk” young adults.

They came to Zephyr Point through the shared mission of recreation with several nonprofits in California, including Sweaty Sheep Santa Cruz, a new worshiping community in the Presbytery of San Jose.

“The retreat was our way of saying ‘thank you,’ to homeless members in our community who cleaned up downtown streets,” said Sweaty Sheep’s Ryan Althaus, who is also the Ppresbytery’s Hunger Advocate. “During this time of reprieve and recreation, our team could observe the impact removing individuals from cyclical cycles of homelessness has on their recovery and motivation.”

For participant Phil Hill, it was profound. All week he felt confronted by difference — in backgrounds, beliefs, values, abilities and people. As he came face to face with these differences, he felt like he had a choice to make.

“I could either unlock the part of my soul that longed for connection, or I could continue to approach life from a place of fear,” Hill said. “I think I will choose healing, connection, and freedom — choose to love through difference.”

They began talking about how Zephyr Point was a wonderful place for those of privilege, and how the board wanted it to be less exclusive by bringing in underserved groups who might otherwise not be able to have a lakefront experience.

For Althaus, it was a moment of clarity: A PC(USA) retreat center and a new worshiping community, along with other partners, could interact with the board to help make Zephyr Point less exclusive.

As that interaction unfolded during the “Evolve and Let Go” retreat last week, as Zephyr Point staff spent time with people who came from a culture they weren’t used to, they began to see things differently.

Watching the joy in the eyes of those receiving linens and watching how they reacted to being out of Santa Cruz for the first time in decades, helped them recognize that people — not proper protocol — are their value.

“Giving them the gift of sleeping in a bed, caring for them in the most hospitable way was like confirmation,” McKenzie said. “This is what we want to be a part of.”

Art, hiking, yoga, therapeutic riding, kayaking and music/dancing introduced participants to a diversity of recreational activities and a diversity of neighbors, testing their capabilities and ability to partner with one another to achiever goals.

One night early in the week Althaus and a small group of campers were outside hoping to meet with board members. When McKenzie saw them, his first reaction was, “ohhh.” Some were shirtless, others didn’t have on shoes.

“We wanted to storm into the meeting,” said Althaus. But McKenzie walked in first. Interrupting the board he asked, “Do you want to meet some of those in the homeless campers group, who are outside?”

“It was like a moment of truth,” he said, “You said this is what you wanted to do.”

Getting an affirmative response, McKenzie went outside and purposely let Althaus and each of the homeless campers go in ahead of him. He even waited a few moments before going back into the meeting. When he saw every board member out of their seats, standing and welcoming the visitors, he recognized a genuine sense of excitement.

“Any perceived fear or anxiety was unfounded,” McKenzie said. “These were moments of grace and shalom.”

For Frick, the week at Zephyr Point was a great example of how worshiping communities can use camp and conference centers and how the centers can serve the mission and ministry of the PC(USA) that goes beyond traditional summer camp for kids.

“Worshiping communities are reaching underserved populations, they can use our retreat spaces to further engage their and our communities,” he said. “The thing is, Zephyr Point didn’t have to do this. Their money flow was fine. They could’ve just sat on it, but they chose to use their money for ministry to whole new group of people.”

Pate wrote this poem about what he experienced at Zephyr Point last week.

The seeds of sorrow fall from her eyes,
Splashing as they reach their destination …
at the feet of reason,
Where the earth in season
transforms the meaning …
of life
… into a promise to overcome the impact of strife.
Smiles shine thru the abysmal darkness,
abolishing the fear that once consumed the fruit of goodness,
with a voice of corruption echoing in the mind
of the one who cries these tears,
that give life.
Once the pain and the suffering have become recognized by the innocent,
reflecting back in the mirror of another’s dew of sorrow …
… splashing against the very flower,
found beneath the feet of reason …
… still I smile

See additional images from the healing and learning retreat at Zephyr Point here.