Triennium is a place for international reunions 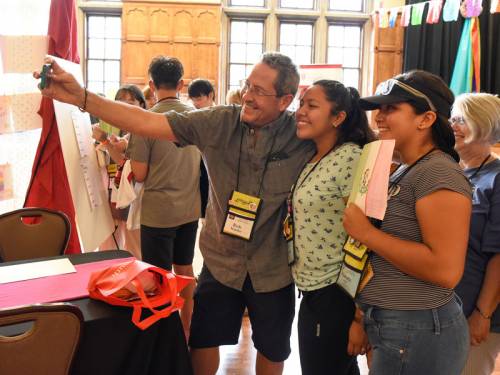 The Rev. Rob Mueller joins Pamela C. and Lisseth R. of Yucatan, Mexico in the Exhibit Hall at Presbyterian Youth Triennium. Behind the group is Pam Reid of Defiance, Ohio. (Photo by Rich Copley)

Those riches are on display at the Presbyterian Youth Triennium, when 16-year-old Pamela C. proudly made a flag of her home country to display on the world map at the Global Partners exhibit space.

Pam Reid, at right, poses with her namesake, Pamela C., in the Triennium Exhibit Hall. (Photo by Rich Copley)

Pamela made it to the States after traveling with her 15-year-old cousin Lisseth R. from their homes in rural Yucatan, Mexico, to Houston and then Columbus, Ohio. The Reids then drove them to their home in Defiance, where the cousins stayed for a few days before Triennium.

“It was hard (for us) to travel alone, but I feel like I’m home now,” Lisseth said.

Richard says that’s because there’s never been a time when Defiance, Ohio hasn’t been a part of the cousins’ lives.

The Reids first met the girls’ grandparents, Fausto and Judith, in 1996, when they took their youth group on a work mission trip to a Presbyterian church in Peto, Yucatan, where Fausto was pastor.

The Reids and their youth have returned every three years. Having made eight trips, they’ve gotten to know Fausto and Judith’s family well.

“On the first trip, their daughter Ruth, Pamela’s mother, was 16,” Richard said.

And Pepe, Lisseth’s father, went to one of the first Trienniums as a youth.

This all happened as technology was developing. Richard remembers the first call he made to Fausto in 1996 to work out details of the mission trip, which included construction work in the morning and Vacation Bible School in the afternoon.

But three years later they were able to send faxes.  And then e-mails, followed by cell phone calls and text messages.

“We are able to see their celebrations of life,” he said, “like when babies were born in their family.” 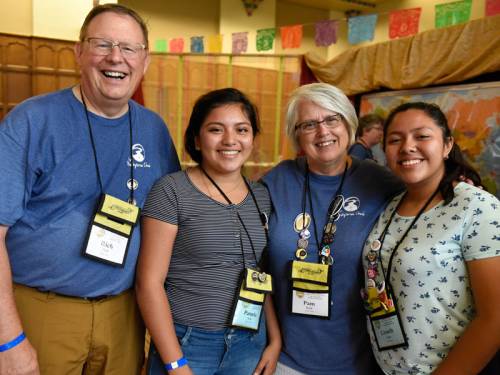 Richard and Pam Reid, in the blue T-shirts, are joined by Pamela C. and her cousin, Lisseth R., in the Triennium Exhibit Hall. (Photo by Rich Copley)

So the Reids knew that Ruth and her husband Miguel cared deeply about them. But when Pam found out they had named their first daughter after her, she was in tears.

“It’s such an amazing honor,” she said. “What a gift and symbol of our friendship.”

“I’m happy that I was named after her, very happy,” said Pamela. “Our friendship is strong. We are drawn together by the way we share our love of God.”

Because they’ve experienced that kind of shared love, both cousins said they hope that all people “get God in their heart” this week at Triennium.

That’s important, Pamela says, because she has seen people who don’t have love or regard for God struggle to love others.

And Lisseth wants people to have true love for God — not just the kind they talk about, but the kind that shows love.

“For this kind of love,” she said, “doesn’t divide but multiplies.”

When Pamela and Lisseth travel home from Triennium on Saturday, nine members of their family will be waiting for them in Defiance.  They’ll worship at First Presbyterian Church with the Reids on Sunday morning and will spend a few days together before returning home to Yucatan.

“I’ve never been paid monetarily for the youth volunteer work,” says Pam. “But my life has been so enriched by the opportunities I’ve had to build relationships with people.”