Ministry helps shape new leaders for both church and community 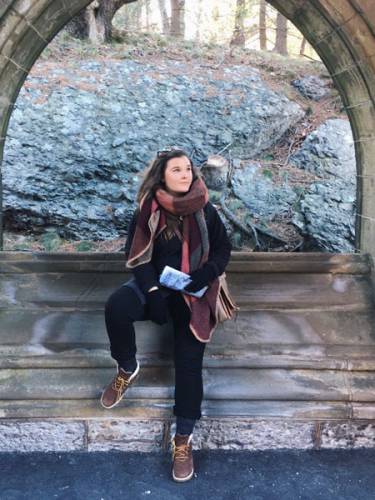 Shannon Schmidt says her experiences through the Presbyterian Church (U.S.A.) “have been transformative to my growth.” (Photo courtesy of Shannon Schmidt)

LOUISVILLE — Shannon Schmidt is currently designing an ethics curriculum at Massachusetts Institute of Technology (MIT) for a class she will be teaching in the spring of 2020. The course will be split between MIT students and incarcerated students who are working toward their bachelor’s degrees and will be taught in a prison-based setting. In addition to this work, Schmidt serves as a facilitator for a support group for formerly incarcerated men in Boston.

She served as a Presbyterian Church (U.S.A.) delegate to the United Nations’ Commission on the Status of Women as a part of the Leadership Development and Young Women’s Ministries sponsored by the Racial Equity & Women’s Intercultural Ministries. She has worked as a Compassion, Peace, & Justice fellow at the PC(USA)’s Office of Public Witness in Washington, D.C. While there she served as a student assistant to the General Assembly.

“Each of these experiences were transformative to my growth, both within the PC(USA) community and on a deeply personal and individual level,” she said. “Throughout my time serving in these roles, I found myself constantly drawn to deepen my understanding of the intersections of interfaith organizing and social justice. Looking back, I can recall leaving each of these experiences with a lens of perspective which routinely nudged me to recognize the coalitions and communities of faith-based actors above and below the surface of the American and global political landscape.”

Schmidt says that since her time at the United Nations, she has gained a better understanding of the varied roles in matters of social justice of the broader social and political communities. “I have become better able to articulate the ways in which communities of faith, and the Church more distinctly, have contributed to narratives and material actualizations of social violence, as well as the ways in which some of these same communities and institutions have engaged for generations in labor toward the advancement of the greater common good,” said Schmidt. “My experiences with groups like the young women’s delegation have occupied a place of sustained hope for me. They represent the hope, both readily-apparent and discreet, that our collective commitment to the labors of social justice is stronger than the forces which seek to erode it.”

Schmidt recently graduated from Harvard University with a Master of Theological Studies degree with an emphasis on religion, ethics, and politics. “I truly cannot imagine being where I am today without the guidance of friends and mentors I have gained through the PC(USA) in the last three, four years alone,” she said. “Their wisdom and love inspired me to deepen my understanding, and their training provided me with the tools to translate that understanding into action.”

She says that each opportunity and experience she gained through her work with the PC(USA) trained her in a variety of skills, but she points out one in particular — coalition building.

“The PC(USA) cannot be examined in a vacuum,” she said. “The very makeup of our collective identity is bound up in our shared work with the communities with whom we are connected. In turn, when collective action within the PC(USA) is done right, it is one of the foremost reflections of our capacity as a community to live up to our highest social and spiritual callings.”

Schmidt says she learned a great deal about the criminal justice system and mass incarceration during her time at the PC(USA) Office of Public Witness and has parlayed much of what she learned into the work she is doing today. She has become strongly committed to becoming familiar with the role that the Church has played in collective construction and understanding of prison, imprisonment, and the present carceral state.

“In D.C. and at the United Nations, a significant part of the training and education I received concerned not only what the Church’s present role might be in matters of social justice, but likewise a close examination and scrutinization of the ways in which the Church has created and contributed to systemic injustice and inequity,” she said.

Schmidt says she has never felt an overwhelming call for ordination or church leadership, but rather to the “broader parts of vocational life which call for field-grounded interfaith organizing toward the realization of a more socially just, equitable society. My training has come from sources both within the PC(USA) and within the world of partisan political community organizing, and I have had the great joy and honor of applying these unique skillsets in tandem with one another. I believe deeply in the collective power of interfaith organizing and have been vastly fortunate that it has played such an intimate role in my vocational and spiritual development.”

Since moving to Boston two years ago Schmidt says she has been something of an ecumenical seeker. With Irish Catholic family roots, her current spiritual home is a Roman Catholic church by the name of St. Cecilia’s in Boston’s Back Bay.