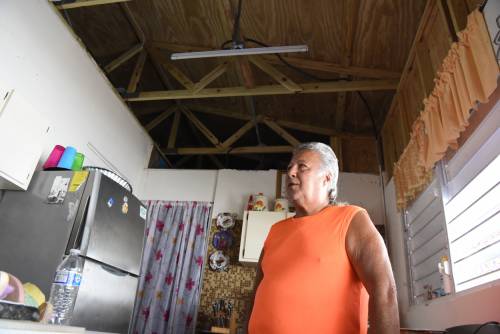 Luis Ramos Salgado at his home in the Caño Martín Peña area. His home had its roof replaced by the G-8 group after the original roof was blown away by Hurricane María. (Photo by Rich Copley)

SAN JUAN, Puerto Rico — If Luis Ramos Salgado had tried to ride the storm out in his home, he wouldn’t be able to walk down his street on this sunny morning.

“I’d be dead,” he says through a translator, standing in the kitchen of the only home he’s ever known in San Juan’s Caño Martín Peña area.

So, he sought higher ground when Hurricane María pounded the island on Sept. 20, 2017. When he returned to his home, he found a big part of it was gone — namely, the roof.

Salgado was far from alone. The storm took the roofs off more than 1,200 homes, left around the same number uninhabitable, and destroyed 75 homes in the area.

But on this warm December morning, Salgado was standing under a new wood and metal roof covering his home, one designed to withstand hurricane winds should Mother Nature decide to deal the U.S. territory another blow. At this point, Salgado is one of more than 80 residents who have received a new roof in a project supported by G-8, a collective of eight communities surrounding the canal that, like other projects in the area, started before the winds of María tore through the island. 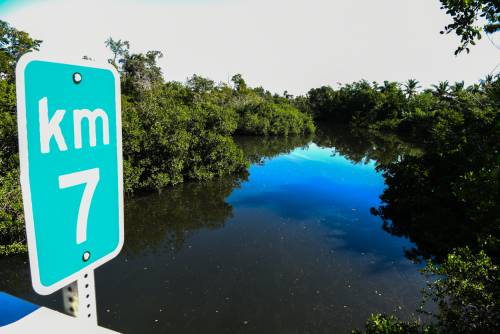 Representatives of three of the Presbyterian Mission Agency’s Compassion, Peace & Justice ministries, plus Presbyterian Special Offerings, toured the community in mid-December on a trip to see work the group was already supporting as well as new initiatives with which the ministries might partner.

“To go to this guy’s house and basically have him say, ‘They saved my life,’ and looking up at his roof and seeing that, wow, this is not just a patched roof, it is an entire structure that these folks have built for this guy, and this guy laying claim and witness to the work of Fideicomiso was really powerful,” says Alonzo Johnson, director of the Presbyterian Committee on the Self-Development of People (SDOP). “I didn’t expect that.”

Self-Development of People, which has previously funded projects in Puerto Rico, has already gone in on a $15,000 grant with Presbyterian Disaster Assistance (PDA) and the Presbyterian Hunger Program to support Fideicomiso de la Tierra del Caño Martín Peña, a community land trust that manages 200 acres along the canal, through collective ownership of its members. The trust was created to protect the rights of residents, many of whom for many decades informally built on the land, which was previously owned by the government. The ownership transferred to the land trust in a 2004 act spelling out how the rehabilitation of the canal area would be managed.

One of the chief concerns is gentrification, which could occur with coming ecological projects along the canal to improve water flow and reduce pollution in the canal. The $15,000 grant, supported by the three ministries through the One Great Hour of Sharing special offering, goes to support personnel to manage the complex documentation required to establish residents’ ownership of the property.

Click here to support the One Great Hour of Sharing Special Offering.

But Presbyterian representatives saw a lot more than just property law to like in their visit to the Caño Martín Peña area in mid-December. In a visit to the main building of Proyecto Enlace del Caño Martín Peña, one of the facilities housing Fideicomiso and G-8, the team saw and heard from community members working to improve the community for residents ranging from school age, with projects like a very active baseball field adjacent to the headquarters, to senior citizens, helping to develop flourishing community gardens.

“The energy in that place, just the amount of activity that goes on in that building was pretty amazing,” said Margaret Mwale, SDOP’s associate for community development and constituent relations.

The visit was led by Mariolga Juliá Pacheco, a special projects manager for the Fideicomiso, whose knowledge of the neighborhood is so acute she could direct a tour van driver without looking at where the vehicle was going. 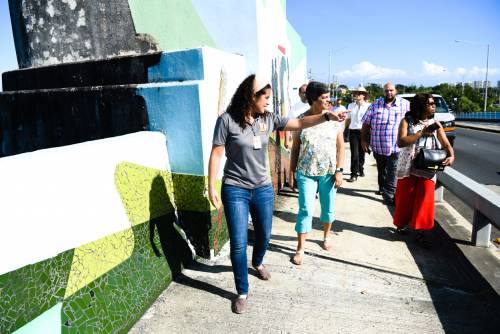 Mariolga Juliá Pacheco, manager of special projects for
Fideicomiso de la Tierra del Caño Martín Peña, leads a tour on the bridge over the canal  for representatives of the Compassion, Peace & Justice ministries of the Presbyterian Mission Agency. (Photo by Rich Copley)

“You’re preaching by your actions, and that’s more useful than to just be preaching about your religious thoughts,” Pacheco says of the Presbyterian Church (U.S.A.)’s  involvement in Fideicomiso. “That has been really rewarding for us, that you are interested in the social project and not trying to get more people to your church.”

Edwin A. González-Castillo, a native Puerto Rican who is Associate for Puerto Rico Recovery for PDA, says the church’s work in Fideicomiso is important for other organizations as well.

“Fideicomiso is so big and well-respected, for the community to see the Presbyterian Church get involved is a very big thing,” says González-Castillo, who was a church pastor and stated clerk of the Presbytery of San Juan when María hit. “People see that we are not doing it to get more people into the church but to reflect Christ to the community.” 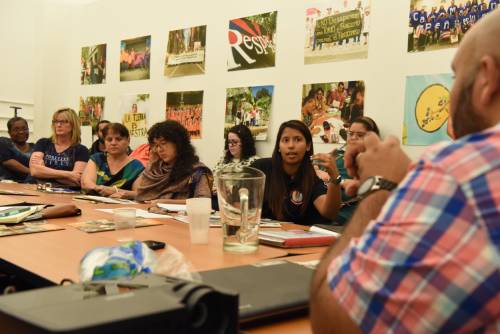 Johnson says the organizations in the canal area are precisely the types of groups SDOP and the other ministries want to partner with. He was particularly struck by a campaign around the community with signs from the organization that read “RECLAMA TUS DERECHOS” or “Reclaim your rights.”

Johnson said the land trust is similar to projects SDOP has worked with in mainland United States communities such as Rochester, New York and Las Vegas, as well as countries from Belize and the Dominican Republic to Sierra Leone and Liberia.

“It’s that feeling when you know you’re walking alongside something that’s really powerful,” Johnson says, adding that he thinks the church should explore more ways it can help in the Martín Peña community and Puerto Rico overall. “That was gratifying to say this is real. This is people doing this.”

Pacheco says that visitors such as the PC(USA) delegation are important as the project progresses, and the community recovers from María. 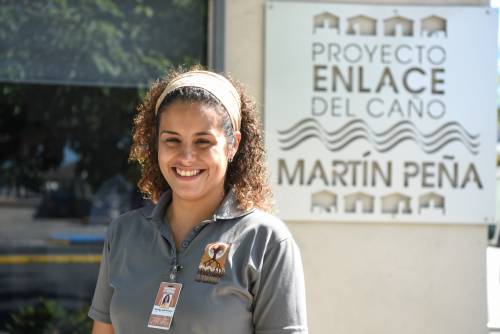 “As more people come down here and see for yourself what we are doing, we have more voices,” she says. “Keep raising your voice for our project. We need more help from the States so that different congressmen and congresswomen understand what is happening here in Puerto Rico and why it is important.”