Like other aspects of ministry, transparency and trust are keys for clergy 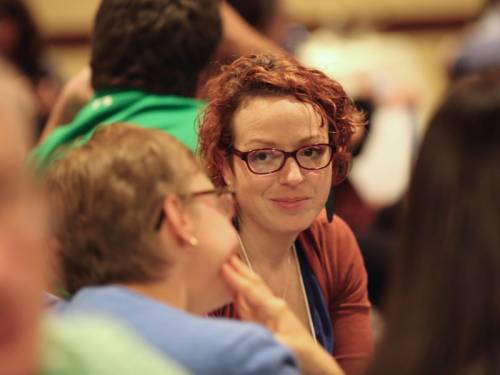 SAN DIEGO — Knowledge of who gives, and how much they give, in a congregation is essential to successful stewardship. This was the message delivered last week by pastors Louise Westfall and Justin Spurlock at the Stewardship Kaleidoscope session titled “You Ask for It: Conversations on the Giving Spectrum.”

Moderated by Sherry Kenney, Ministry Relations Officer for the Presbyterian Foundation, the workshop delved into the possibilities and pitfalls of pastors having intimate details of their congregation’s financial stewardship and planning. But the transparency isn’t one way — both pastors also reveal to their congregation their pledging patterns and projects they were most excited about funding.

Stewardship Kaleidoscope is the annual conference for Presbyterian Church (U.S.A.) and Evangelical Lutheran Church in America pastors and leaders to discuss stewardship, generosity and giving. The conference drew more than 300 attendees this year was held at the Catamaran Resort and Hotel in San Diego Sept. 30 to Oct. 2.

Westfall said a mentor urged her during her first pastoral call to “know as much about the finances of that church as the chair of the finance committee.”

“Prior to coming to the church, I met with folks to understand the mission of the church and the practical financial realities,” Westfall says. For her, joining the two together is “all part of God’s plan.”

“I set my pledge to whatever the median pledge is for the congregation,” Spurlock says. “It’s currently about $3,800 and I’m able to tell people, ‘My pledge goes up when your pledging goes up.’”

That sort of transparency allows him to communicate three things. First, he’s able to share what the congregation’s median gift is. Second, it puts him in line with the giving trends of the church. Third, he’s able to share this number with new members.

Both speakers were adamant to say the knowledge of giving particularities is merely a beginning to build relationships and speak more candidly about the varieties of ways stewardship is expressed. For some, that means being asked to take on an extra financial commitment. For others, it’s a way of inviting increased participation and a meaningful — even if small — financial contribution.

“I like to preach on the concept of first fruits, that you first give to God,” Westfall said of the concept of tithing, relating it more to a whole-life effort of stewardship. “We fall into the arena of thinking giving to God is only a financial concern — it’s not 10 percent, it’s everything — we’re supposed to give God 100 percent.”

“If I look at a young family and say giving is part of how we do church and community together, I ask how would you like to give?” Spurlock says. “If I have the same conversation with the silent generation or boomers who are retiring, I ask them how they want to see their church in the world. Then I make an ask based on the assumptions I’ve discerned from our conversation, based on this relationship.”

For Westfall, that means inviting people to be part of the ministry and mission of the church, to be included and asked to contribute to things they believe in and are passionate about. For her, that crosses all generations — whether it is funding the social concerns of younger people or providing for the programs important to older members.

“My people are used to me asking all the time — whether it’s money or a volunteer thing, or a name for a reference or to pray for something specific,” Spurlock says. “I rarely have an unintentional conversation with people. But if I go into any conversation with them, I know I’m leading it somewhere. People want me to be their spiritual guide and to help them get to the next step in their spiritual life. They expect me to say, ‘Here’s what I see is going on in your life, and here’s where I see you going.’”