…be led forth in peace. (Isaiah 55:12). Support to the Peace & Global Witness Offering.
Make A Donation Click Here >
Home › Years of cooperating and cajoling by churches in the Presbytery of the Pacific helped pass legislation to bring more affordable housing to Los Angeles County

The Rev. Heidi Worthen Gamble: ‘It becomes a powerful little movement for your church’ 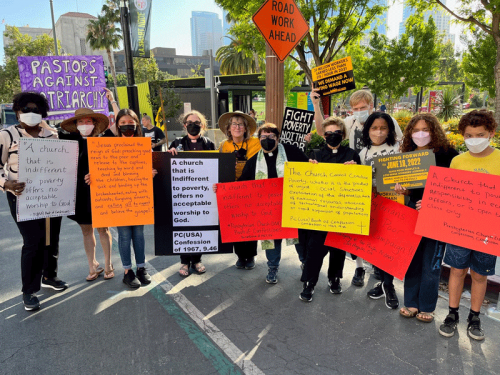 Affordable housing advocates from the Presbytery of the Pacific were instrumental in seeing Senate Bill 679 pass both chambers of the California Legislature. (Photo courtesy of Heidi Worthen Gamble)

LOUISVILLE — According to a 2020 count, Los Angeles County had 66,433 homeless residents, about the same population as two of California’s college towns, Palo Alto and Davis. Churches including First Presbyterian Church of Hollywood and its indominable director of Urban Mission and Community Outreach, Amie Quigley, became “the model for how church-based homeless ministries work in collaboration with city, county and private agencies,” said the Rev. Heidi Worthen Gamble, Mission Catalyst for the Presbytery of the Pacific.

But a few years ago, Los Angeles-area churches realized “there were folks on the streets that nobody could reach,” Worthen Gamble said. FPC of Hollywood responded by providing a winter shelter, converting its fellowship hall into a shelter site.

“Having a resource like that is one you capitalize on,” Worthen Gamble said. The task became one of urging churches “to shift from doing food and handouts to really working in collaboration with social service agencies to house people. That’s a big shift in thinking,” one that FPC of Hollywood “was already demonstrating.”

Six years ago, Southern California voters passed Measures H and HHH, which put hundreds of millions of dollars for permanent housing into both city and county coffers. “We were very much being loud with our churches about passing these bills,” Worthen Gamble recalled, adding that while she didn’t receive pushback for her efforts to persuade, “people did say, ‘You are so courageous for being political. My pastor won’t touch this.’”

Under the leadership of executive presbyter the Rev. Linda Culbertson — “she is very much a bold leader,” Worthen Gamble says — the Matthew 25 presbytery began to talk about political advocacy as a response to systemic poverty. “You can’t get there without changing laws,” Worthen Gamble said. “We didn’t need to pass this through the presbytery. We are the PC(USA). We have made these statements, and we can promote bills that will house our homeless neighbors.”

Once voters approved those two measures, churches in the presbytery started a Homeless and Housing Task Force, which continues meeting monthly. “The problem is deep and wide and vast, and churches need the kind of support we are offering,” Worthen Gamble said. “We talk about how we are living out the Matthew 25 call by seeing the face of Christ in those asking for help.”

As new churches come on board to battle homelessness, “it’s a lot of hand-holding initially,” she said. “We ask, ‘What part of LA are you in? Here are the service providers and case managers who will be critical, and coalitions you can connect to.’”

Churches have learned how much effort it takes “to do good research in your neighborhood,” Worthen Gamble said. “Making connections and figuring out the ecosystem of services in your neighborhood is where you must begin. It’s an essential component to your homeless ministry.”

“That’s where the magic happens — when we start to get connected,” she said. “Case managers, nonprofit leaders and the police start to understand that this church is connected, and they see your church as a resource for the community. It becomes a powerful little movement for your church, but it takes a while.”

Since the pandemic began and even before then, “elected leaders and nonprofits have been saying that affordable housing is such a key element to solving the root causes of homelessness in Los Angeles,” Worthen Gamble said. “The longer you’re on the streets, the harder it is to get back,” and mental health challenges and crime can also become factors.

The task force continued to meet regularly via Zoom throughout the pandemic “to see how we could step it up,” Worthen Gamble said. “How do we push affordable housing when it feels impossible in Los Angeles County?” The county is home to 88 communities. With a population of nearly 12.5 million, Metro Los Angeles has more people than every state in the nation but six.

Task force members heard from service providers in New York and San Francisco about starting a housing solutions agency, “a reservoir to raise funds on a bigger scale, to scale up funds and collect private funds, and to have representatives from various parts of the county … plan for an affordable housing bill,” Worthen Gamble said. Using that kind of framework “really starts to shift things. It’s like a department of water and power for affordable housing. It starts to shift affordable housing to a right.” 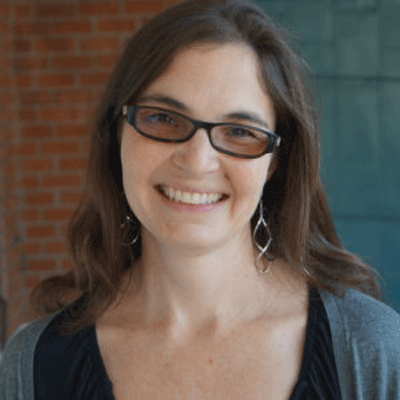 The Rev. Heidi Worthen Gamble is Mission Catalyst for the Presbytery of the Pacific.

The result was Senate Bill 679, which passed its last legislative hurdle last month and awaits the signature of California Gov. Gavin Newsom. The legislation creates an L.A. County agency dedicated exclusively to building affordable housing and creates funding mechanisms to make that happen. Churches in the Presbytery of the Pacific were among the bill’s strongest supporters.

If and when Newsom signs the bill into law, the Hilton Foundation has pledged $1 million to get the agency started, Worthen Gamble said.

“We have amazing stories around pastors and lay leaders promoting this bill,” Worthen Gamble said. She recalled talking with a senator who was meeting with supporters of the legislation. “You’re a reverend,” the lawmaker said, pointing at Worthen Gamble’s clerical collar. “What does the reverend have to say?”

“I said that one of my concerns is accountability. How do we keep this agency from becoming corrupt?” Worthen Gamble said. “He said, ‘Good point. The reverend is right.’ He looked over at one of the people putting the bill together and said, ‘Create a citizen oversight committee and I will co-author this bill.’ I take a little credit for creating that citizen oversight committee,” Worthen Gamble said, chuckling.

While the bill was still being debated, one key legislator remained unconvinced. “He does not vote for the poor,” Worthen Gamble said. But the Our Future LA Coalition — which includes Presbyterians attending Matthew 25 churches in communities including Rolling Hills Estates and Lomita — took to the phones to let the lawmaker know exactly where they stood.

“We needed 19 votes and we got them all. Everyone was shocked,” Worthen Gamble said. “There is no way this is not a Presbyterian win.”

“They have nicknamed us the ‘Praying Presbyterians,’” she said. “If we had not put on a full-court press, there’s no way it would have passed.”

The California Senate had passed a version of the bill earlier. When SB 679 returned, opponents including Realtors were ready. “What was no big deal before in the Senate became a massive fight, one of the nastiest fights the California Senate has ever had on any bill,” Worthen Gamble said. “I was telling folks, ‘That’s how you know you have a powerful bill. Power will not give up its power.’”

“We were watching the bill minute by minute,” she said. “It was a beautiful experience. A pastor on the task force said, ‘Heidi, I’m going to organize my people. We’ve got this.’ I just started weeping. My gosh! We had dozens of people making calls, and I’m still learning [the extent of their efforts]. You’ve got to be ready and know the moment you’ve got to launch. You’ve got to keep your wicks trimmed.”

Presbyterians in the Presbytery of the Pacific and their fellow travelers aren’t ready to celebrate until Newsom signs the bill into law.

“One thing I can say without a doubt is that Presbyterians in Pacific Presbytery have been key to this bill moving forward,” Worthen Gamble said. “We don’t really know how to celebrate these things. They aren’t tangible, and so I think it’s important as we move more deeply into our Matthew 25 call as the PC(USA) to think about how we celebrate these moments.”

Part of that celebration, she said, is “making holy” the “very unattractive work of making phone calls, writing letters and signing petitions. Find ways to really talk about the impact of that work.”

“We also need to understand we aren’t the only ones building the kingdom here. It’s not about us — it’s about the common good. It’s a time to understand that mission is different when justice is at the core of what you’re doing. … We aren’t even sure about our own story, but we know we are potentially making an enormous impact. We are navigating our way for how we understand our identity as a church doing this work.”

“This is really about giving your power away.”