Make A Donation Click Here >
Home › Without missing a beat 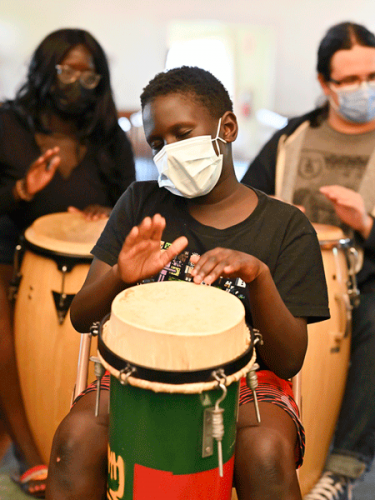 As part of a recording to help dedicate the new conference center at the Presbyterian Center, young drummers from Beechmont Presbyterian Church in Louisville offered up a percussive performance. (Photo by Rich Copley)

LOUISVILLE — Led and inspired by the joyful recorded percussion provided by youth drummers at Beechmont Presbyterian Church in Louisville, Presbyterians on Tuesday dedicated the Presbyterian Center’s new conference center that will host the 225th General Assembly — and, perhaps, some future assemblies as well.

“A whole bunch of folks have put time and energy into this renovation,” said Kerry Rice, Deputy Stated Clerk in the Office of the General Assembly, who also offered up tours of the new facility, where finishing touches are still underway ahead of the assembly’s June 18 start date. “Our hope is this space is not just about the General Assembly, but how we engage the world and our ministry together in this new meeting space. This will allow us to greet more folks in a new way.”

Julia Henderson, leader for General Assembly Planning and Business, laid out the framework — and some of the many challenges — in hosting a hybrid assembly. In two-thirds of the committees, more than one language will be spoken. Four committees have people who use three languages. A committee moderator and the vice-moderator of another committee have Spanish as their first language, which will require on-the-spot translation services for those who don’t speak Spanish. “We are so grateful for Global Language Resources,” Henderson said. 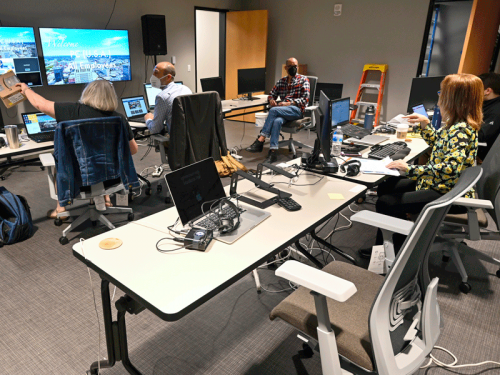 The production studio in the new conference center was a beehive of activity on Tuesday. (Photo by Rich Copley)

Dr. Dianna Wright, director of Ecumenical and Interreligious Relations in the OGA, said Co-Moderators Elona Street-Stewart and the Rev. Gregory Bentley “have gathered together an awesome leadership team” who’ve spent months planning worship during the assembly, which anyone with an internet connection can access. The goal, Wright said, is to create worship experiences “that will nurture our hearts and spirits, a mixture of tradition and innovation and creativity.”

“People will no longer call us ‘God’s frozen chosen,’” Wright predicted. “We hope it will be a model for the church when it comes to doing hybrid worship in your community.”

Amanda Craft, manager of advocacy for the OGA’s Office of Immigration Issues, said this assembly’s Hands and Feet initiative will, like the 223rd General Assembly, once again focus on the harm done by the cash bail system. “We know it’s a structural justice and a community issue,” Craft said. The July 7 Hands and Feet event will be prerecorded and livestreamed and will feature a panel discussion of people working on the issue in their community.

The Rev. Tricia Dykers Koenig, associate director of Mid Council Relations in the OGA, discussed the process by which people have already uploaded their video testimony, giving commissioners — and anyone else who’s curious — the chance to view the testimony even before committee meetings and plenary sessions are underway.

Kate Trigger Duffert, manager for GA Business and Per Capita Promotion, had a piece of advice for people serving as committee resource persons: be prepared to speak with a mask on, demonstrating the skill during a short talk.

valerie izumi, manager for General Assembly nominations, talked about another staple of past assemblies: the Riverside Conversations, which are occurring this month and into June. Learn more and register here.

In a question-and-answer session that preceded tours of the conference space, Henderson expressed thanks to the Rev. Rosemary Mitchell, who just retired as senior director of Mission Engagement & Support. With guidance from Mitchell and others with MES, all the assembly’s sponsorship slots were sold, Henderson said.

Henderson also thanked those present on Tuesday. “Many of you said yes to serving behind the scenes,” Henderson said. “We are grateful for that, and we have a few more opportunities.” 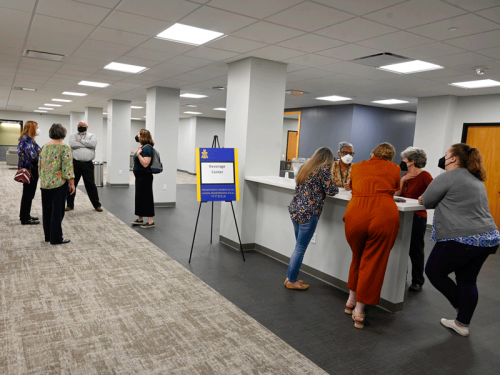 “Since the beginning of the pandemic,” Nelson said, “we have been involved with trying to get to the place we are right now.” He said he’s confident that “when we turn on the lights [next month], they will come on.”

Nelson said he’s proud of staff “who have pushed through this. When they failed, they stood up again and continued to walk by faith. We are still in the hands and the clutches of a grace-filled God.”

In his benediction, Nelson called the Almighty “an everlasting God who challenges us to be daring in the work we do … Humbly we offer this to you as a reminder of what you can do in our institutional life and also in our daily life. May we always remember you have given us everything we need, including your son, Jesus Christ, who holds our hand while we run the race.”

“We have the courage to believe,” Nelson acknowledged to God, “you can do anything but fail.”