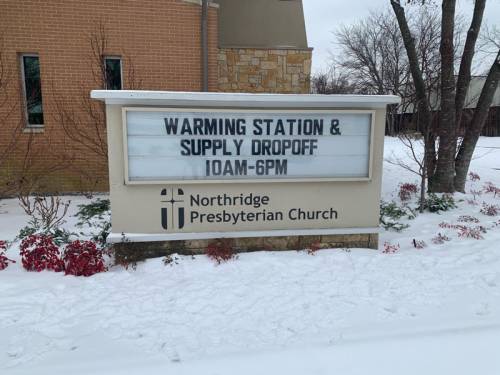 LOUISVILLE — When many Texas communities were hit hard by winter storms last month, Northridge Presbyterian Church in east Dallas found itself in a position to bless others.

“A lot of neighborhoods were having power go in and out, but somehow, the church was steady and we kept water as well,” said the Rev. Betsy Swetenburg, Northridge’s pastor.

That was significant at a time when record cold temperatures were wreaking havoc in Texas and other states. More than 3 million Texans were without power for days and more than 13 million people across the state were affected by boil-water notices or had no water during the crisis, according to The Dallas Morning News.

Concerned about the situation, Swetenburg said she reached out to a city councilwoman and said, “We have power, so surely, we can help.” 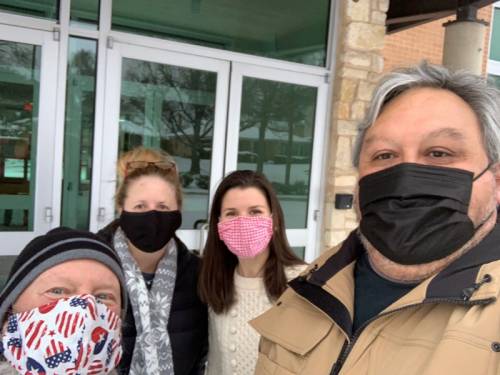 Church members and business leaders were among those who stepped up to answer Northridge Pastor Betsy Swetenburg’s appeal to help residents affected by winter storms. Swetenburg  is in the checked mask. (Photo courtesy of Betsy Swetenburg)

The pastor also sent out an email to the congregation saying, “What a gift. We have power and water. We have to share it. … Here’s what we’re gathering. If you would like to volunteer for a shift, let me know.”

The church offered to be a warming station — a place where people without heat can stay — but the church’s main role became the receiving of donated goods that could then be distributed to people in need.

“It wasn’t just food,” Swetenburg said. “It was blankets and mittens and water keys and propane. … We just had so many donations,” including some from businesses that wanted to help.

Church members jumped at the chance to serve as volunteers in the effort, even though many had challenges themselves.

“All of them were either dealing with their own burst pipes or were trying to take care of family members across the state who were in really bad shape, without water and power,” Swetenburg said. Yet, the volunteers “showed up and were just so happy to do something for others.”

That’s the kind of spirit Presbyterian Disaster Assistance has witnessed among Presbyterians after many disasters, from wildfires to hurricanes. “It’s typical of what I see around the denomination, which is churches and congregations that are in a position to help, stepping forward to offer what support they can to the response and to the recovery,” said the Rev. Jim Kirk, Associate for National Disaster Response for PDA, which was in contact with affected presbyteries to offer its own support early on and will remain engaged as the response and recovery continue.

When drop-offs or deliveries arrived at Northridge, Swetenburg would reach out to her city contacts to see where to best direct the items, recognizing that west Dallas was harder hit than the church’s own Lakewood neighborhood.

The Kay Bailey Hutchison Convention Center Dallas “was hosting a lot of folks experiencing homelessness, so we sent a lot of stuff there,” and sometimes the police would come to pick up items, Swetenburg said. 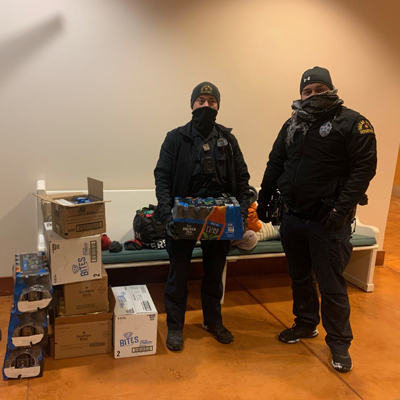 Being of assistance during the disaster helped the church to fulfill its goal to be a good neighbor. “It’s not often that you get to have moments where you are so clearly being the church,” Swetenburg said. “You can’t miss those moments.”

Other churches also stepped up to help. “The connectionalism of support and care has been very significant,” said Joanna Kim, Director of Ministry Services for Grace Presbytery.

First Presbyterian Church of Dallas was active in helping find safe shelter for the homeless and soliciting donated goods, according to its blog. That church also helped to feed people.

“Our Meal Service Team hunkered down overnight at FPC Dallas’ building so they could remain close to The Stewpot kitchen without having to drive on icy roads. They stuck to their commitment to serve three hot meals a day to the hundreds of people staying at the center, even in the midst of off and on power outages,” a Feb. 18 blog post noted.

The blog post went on to say, “Individuals from our team have been working tirelessly to process donations, answer phone calls, set up the convention center, safely drive our unsheltered friends, pray, cook, and spread the word about the important work we have been doing in our city.”

United Presbyterian Church in Greenville, which is about an hour northeast of Dallas, was instrumental in helping to get bread distributed to several families. It also opened its doors to people needing to come in and fill up jugs or other containers with water.

“The police said they had people calling them trying to find places they could get water because at that point in time there was no water to be had,” said Jane Goulding, an elder who chairs the Mission and Evangelism Committee. “The shelves were stripped in the stores.” 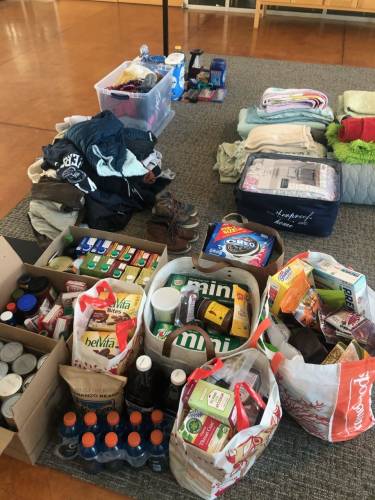 Also, a lot of people were dealing with rolling blackouts, she said. “For about four days we would never quite know when we would or would not have power.”

PDA applauds churches for reaching out to their communities. “We should never underestimate how meaningful even the simplest gesture can be,” Kirk said.

Kirk also stressed the importance of being prepared for such moments. “We affirm and encourage churches to build relationships with local government leaders and emergency management people before a disaster hits to more effectively and efficiently be in a position to help when something happens,” he said. “The typical scenario of responders coming in from outside of an area has been curtailed because of the pandemic, and so now, more than ever, it’s important to build local capacity and capability.”

During last month’s storms, PDA reached out to presbyteries in Texas, Oklahoma, Arkansas, Mississippi and Louisiana to offer assistance. “PDA continues to be in contact with the impacted presbyteries to discuss grant opportunities,” Kirk said.

Presbyterian Disaster Assistance is one of the Compassion, Peace and Justice ministries of the Presbyterian Mission Agency and receives support from One Great Hour of Sharing. To help PDA respond to disasters like these, go here to donate online.

Mid-councils or churches that would like to learn how they can be prepared to respond in times of disaster should contact James.Kirk@pcusa.org.