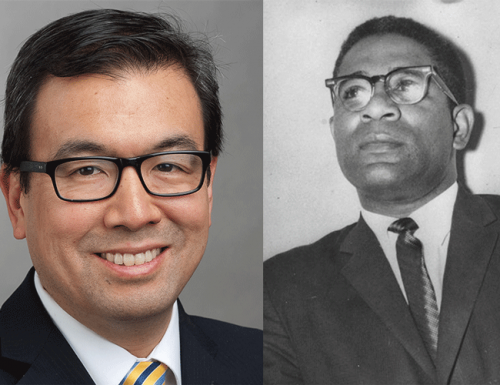 The Rev. Dr. Frank Yamada, left, and the Rev. Dr. Gayraud S. Wilmore, who died in 2020, are being honored this summer with Theological Education Awards.

Wilmore, who died at 98 in 2020, served in denominational positions in the PC(USA) and taught at several seminaries. He was also a prolific author, writing 16 books with a notable focus on Black Presbyterians and was a leading voice in the founding of the Black theology movement. Yamada serves as Executive Director of the Association of Theological Schools and Commission on Accrediting, the association and accrediting body for graduate schools of theology in the United States and Canada. Yamada is credited with visionary leadership that helps seminaries innovate.

In addition to both COTE and the Theological Education Fund jointly honoring Wilmore and Yamada, they will ask the 225th General Assembly to do so. Wilmore is the first person to be honored posthumously. Yamada is the first Asian American recipient.

“Each time that we select honorees for the Excellence in Theological Education Awards, we have the opportunity to look back — but also to look forward,” says Saundra Tracy, Chair of the Committee on Theological Education. “We are righting a historic wrong this year by honoring Rev. Dr. Wilmore, who should have received this recognition in his lifetime. His roles both in the denomination and in theological education at large were transformative in church and society. Additionally, by honoring Rev. Dr. Yamada, we are giving thanks for and highlighting Yamada’s ability to help us look into the future of theological education by building models and standards of education that will shape generations far into the future and across the United States and Canada.”

The Rev. Dr. Lee Hinson-Hasty, senior director of funds development for the Theological Education Fund at the Presbyterian Foundation, noted that the award is the highest honor in the PC(USA) for those who teach, lead and support theological education. “At their best, theological educators form those willing to learn to see around the corner to where God is calling us next,” Hinson-Hasty says. “In different ways, both of our awardees have been prophets. But they did not stop there; they have taken us to unexplored frontiers. We lift up Wilmore’s amazing, faithful, and courageous story as a witness and reminder that Black scholars’ lives and work has mattered for a long time and continues to be deeply valuable. Honoring Frank Yamada is a nod to the future of theological education and a round of applause for his visionary leadership in a time when innovation is essential.”

For more information about each honoree, please read their biographies below.

The Rev. Dr. Gayraud S. Wilmore (1921-2020) had a deep impact, particularly in the Presbyterian Church and in Theological Education. 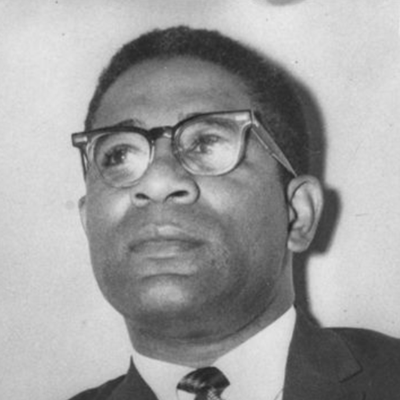 Wilmore felt a call to the ministry in the midst of his service with the all-Black 92nd Infantry Division in Italy during World War II. Having earned Bachelor and Master of Divinity degrees at Lincoln University, Wilmore was ordained and was called to pastor Second Presbyterian Church in West Chester, Pennsylvania, from 1950 to 1952 after serving a year as a student pastor, where he helped integrate the city’s elementary schools. He served from 1952 to 1955 as Presbyterian Regional Secretary of the Student Christian Movement (SCM) for the Middle Atlantic Region, based out of Philadelphia.

He served from 1955 to 1960 on the staff of the Department of Social Education and Action (SEA) of the Board of Christian Education (BCE) of the Presbyterian Church (USA). At the 175th General Assembly (1963) of the UPCUSA, the Assembly created the Commission on Religion and Race (CORAR), appointing Wilmore as its first executive director, a position he held until 1972. In this position Wilmore oversaw several racial justice initiatives and organized protests.

Notably, he was the only African American member of the drafting committee to create the Church’s Confession of 1967.

A leading scholar in Black theology, Wilmore was a professor at six different seminaries and lectured at colleges across the United States. From 1960 to 1963 he was professor of Social Ethics (and the only Black professor) at Pittsburgh Theological Seminary. Wilmore then taught social ethics at Boston University School of Theology from 1972 to 1974 and at Colgate Rochester Crozer Divinity School from 1974 until 1983. In 1983 he became the dean of divinity at New York Theological Seminary and served in that position until 1988. Following his time at New York Theological Seminary he went on to teach church history at the Interdenominational Theological Center in Atlanta. In 1990, he became the editor of The Journal of the ITC. From 1995 to 1998 Wilmore was an adjunct professor at the United Theological Seminary in Dayton, Ohio. Wilmore was the author and editor of 16 books, among them “Black Religion and Black Radicalism: An Interpretation of the Religious History of Afro-American People” (3rd edition Orbis Press, 1998) and “Black and Presbyterian: The Heritage and the Hope” (Geneva Press, 1983; revised and enlarged edition Witherspoon Press, 1998).

The Rev. Dr. Frank M. Yamada is known for advancing the work of theological education in multiple ways, in multiple institutions of theological education, and continues to provide transformational leadership in the field. A third-generation Japanese American (sansei), Yamada was raised in a Buddhist home before becoming a Christian at the age of 19. 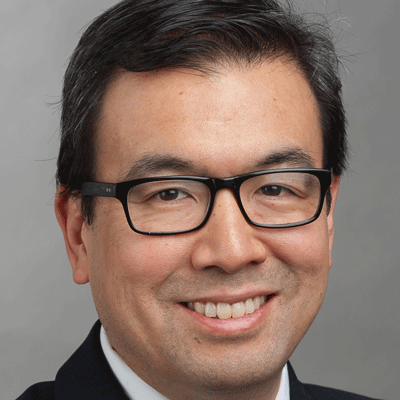 Yamada taught Hebrew Bible at Seabury-Western Theological Seminary before joining the faculty of McCormick Theological Seminary as associate professor of Hebrew Bible and director of the Center for Asian American Ministries in 2008. In 2011 he was elected as McCormick Seminary’s 10th president, the first Asian American to lead any of the PC(USA)-related seminaries. In 2014, Yamada joined the board of the Association of Theological Schools (ATS) and in July 2017 was called as executive director of ATS and the Commission on Accrediting, the association and accrediting body for graduate schools of theology in the United States and Canada. He has also served as a Trustee for the Forum for Theological Exploration, a member and chair of the General Assembly of the PC(USA) Committee on Theological Education, and a member of the PC(USA) Special Committee on Funding Theological Institutions (2014-2016). Each of the organizations and institutions above have made visionary, generative, and strategic strides forward.

In addition to his service in academic administration, Yamada is a biblical scholar. He is a member of the Society of Biblical Literature, serving as chair and committee member of the Asian American Biblical Hermeneutics Group, the Feminist Hermeneutics of the Bible Section, and the Committee for Underrepresented Racial and Ethnic Minorities in the Profession.

Yamada is a graduate of Southern California College and Princeton Theological Seminary, where he earned Master of Divinity and Doctor of Philosophy degrees. He is an ordained teaching elder in the PC(USA). His ministry has been especially marked by the first of those two words — teaching.

Previous Recipients of the Excellence in Theological Education Award are listed below.

Robyn Davis Sekula is Vice President of Communications and Marketing for the Presbyterian Foundation. She is a ruling elder in the PC(USA). Send comments on this story to robyn.sekula@presbyterianfoundation.org.