Make A Donation Click Here >
Home › ‘Will we be among the just ones?’ 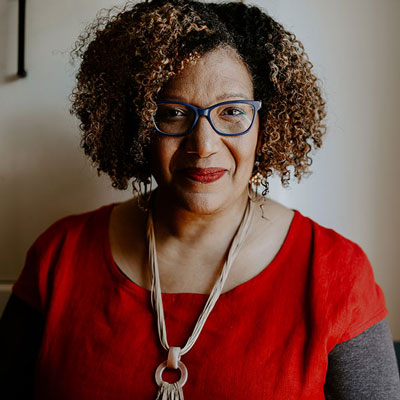 LITTLE ROCK, Ark. — One of Lisa Sharon Harper’s favorite talks is her take on Matthew 25, which she shared Friday morning with the approximately 650 people attending the national gathering of the Association of Presbyterian Church Educators.

Before diving into Matthew 25, the namesake for the invitation for Presbyterian Church (U.S.A.) congregations and mid councils to build congregational vitality, dismantle structural racism and eradicate systemic poverty, Harper took listeners back to Matthew 23, where Jesus denounces the scribes and Pharisees and laments Jerusalem. After doing that, Jesus “bolts with the disciples across the street to the Garden of Gethsemane,” said Harper, a speaker, writer, activist and artist. “They look out at the temple, and Jesus breaks into Matthew 25,” which concludes with the judgment of the nations.

It’s not really the nations that are gathered, she notes, since nations didn’t really exist at the time. Call them people groups instead, Harper said. The king gathering the people groups is reminiscent of the vision of the expected king who judges among many peoples in Micah 4:1-5, she said.

In Matthew 25, the Son of Man calls the sheep “blessed by my Father.”

“To bless is to speak well of,” Harper said. “Imagine God speaking well of you.”

She did a bit of a word study on some of the “for I was” terms. “For I was hungry” is more like “hangry,” she said, one who’s famished and doesn’t know where the next meal is coming from. “Think swollen bellies and flies in the eyes,” she said.

The stranger “is like an immigrant traveling through the land,” she said. “Naked” is akin to “stripped,” as in stripped of everything they have. “In prison” was probably in the context of political imprisonment — people incarcerated because they wanted to overthrow Rome.

The righteous then answer Jesus. Harper asked a biblical scholar she admires what “righteous” means in Matthew 25 and was told it can mean only one thing: people of equitable action and character.

Jesus’ answer to the sheep’s question in verse 40 — “Truly I tell you, just as you did it to one of the least of these who are members of my family, you did it to me” — proves whom Jesus stands with, and who he is.

“He didn’t say you must love the vulnerable,” Harper said. “He says I am them. It’s not possible to love Jesus and be OK with inequity.”

People who work for equitable care and action look at the nation’s hungry and ask, how can we make the distribution of good food more equitable, Harper said. How can we eliminate the reality of food deserts?

They look at Flint, Michigan, and Washington, D.C., and ask, how can we make the distribution of clean water a reality?

They look at the nation’s immigration system and “ask this profound question: Who is getting more welcomed here, and who is not being welcomed?” Harper said. “How can we change the way things work so that welcome is distributed equitably?”

The same goes for the nation’s systems of delivering healthcare and meting out justice equitably, she said.

“The just ones could not stand a world where people have to play on uneven playing fields,” she said.

After attendees had voiced examples of compassionate ministries in their communities, Harper said those efforts lift “some of the suffering of the most vulnerable. The next step is to engage the power that made the food pantry necessary in the first place. There are people in your town. Find those people and walk with them. That’s the power of the church — we have finances and resources and we can aid the struggle.”

She noted that Matthew 25 ends with Jesus talking about hell.

“People don’t like to talk about hell, but Jesus talks about it, although not in the way most of the church talks about it,” she said. “Jesus, the one who beat death, says that equity and justice is the thing that will make the difference. Did you protect, cultivate and serve the image of God on Earth? If you did not, you won’t like heaven.”

Those whom Jesus called “a brood of vipers” two chapters earlier in Matthew’s gospel “believe they are chosen because of their ethnic group. They believe their race saves them,” she said. In Matthew 25, “Jesus created a whole new people group, those of equitable action and character, the just ones.”

“The question left for us and the church is, will we be among the just ones?”