Make A Donation Click Here >
Home › Where we forget to look

A favorite verse for those in prison ministry: ‘I was in prison and you visited me’ 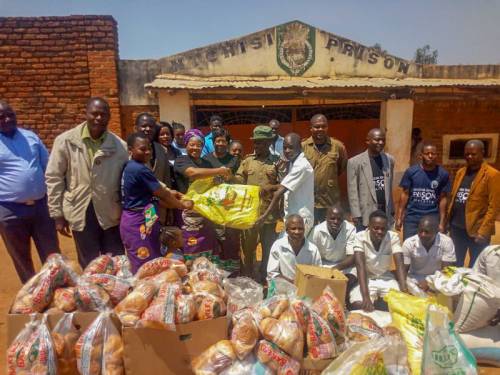 During a prison ministry visit to Ntchisi Prison in central Malawi, a congregational prison committee brings food, hygiene items and Bibles to inmates and prison officials. Many congregations in Malawi have a prison committee. Representatives meet annually to report on their ministries, share struggles and victories, learn and plan the way forward. (Photo by Wickliff Kang’ombe Zulu)

LILONGWE, Malawi — If you were to visit Maula Prison, built on a hill in the capital city of Lilongwe, Malawi, you might notice that it feels very outdoorsy and open. There are multiple layers of fences, but in between them is open, undeveloped space. The lack of shrubs and low trees allows clear sight for a long distance.

During visiting hours, you may also notice large numbers of people lining the inside fences. After visitors have navigated the front gate and walked the hundred yards or so to the fence surrounding the main yard and cell blocks, they spread along the fence to talk to the inmate they are visiting. The fence is double-layered, with a few feet in between serving as a pathway. On the other side of the fence opposite the pathway the inmates spread out, talking to their visitors. Or rather, shouting, so they can be heard over the wind, traffic and other people. That is the closest they seem to get to a private visit during incarceration: a shouted conversation through two fences and across an open pathway, with other visitors and inmates standing nearby.

In order to advance from apprentice to full facilitator, we had to lead at least two healing groups between the initial and advance trainings. Zulu and I worked hard to facilitate two groups together. What should have been “plenty of time” turned into “just enough time,” thanks to the prisons’ changing schedules, political demonstrations that made getting around town difficult, last-minute mandatory meetings and many life interruptions that make keeping to schedules complicated.

Because his ministry is with the prisons in the Central Region of Malawi, Zulu wanted to offer trauma healing groups in the prisons. This posed some challenges, largely because consistent attendance is a key part of a healing group, and inmates are not in control of their schedule. Zulu is familiar with the leadership of the two prisons in Lilongwe, and so he met with the leadership to tell them about trauma healing groups and to get permission for inmates to participate. It took some convincing! When they thought of it as counseling, they questioned whether group counseling worked, because in the past inmates wouldn’t open up in a group. When they thought it was a Bible study, they wondered why we couldn’t just do it on Sunday when the church groups normally came, and why it had to be so long and with a specific group of people.

The trauma healing program progresses through an understanding of God, suffering, and evil, to teach about grief and how to grieve well, so we can heal. The program culminates with lessons on forgiveness and bringing our pain to the cross for Christ’s healing.

At Kachere Youth Prison in Lilongwe, we allowed the administrative staff to tell us which inmates to meet with, and we met with nine young men.

At Maula Prison, Zulu met with the CCAP church that gathers inside the prison and asked them, “Who believes they shouldn’t be here, or doesn’t understand why they are here?” And from that question, about 30 men came to the group.

Both groups said the biggest impact for them was the concept of forgiveness. One youth said, “If I had known how to forgive, I wouldn’t have done the things that got me here.” Many of the men at Maula said, “Because I’m here, I am very bitter, and now I know I need to forgive in order to let that go.” In many different ways everyone found the need to forgive and to be forgiven to be the most important and most healing aspect of the group. Whatever the circumstances that resulted in the men being in prison, a wrong had occurred. Whether it was a wrong done by them to someone else, or a wrong committed against them in the form of unjust incarceration, they were all very aware of the need for forgiveness. 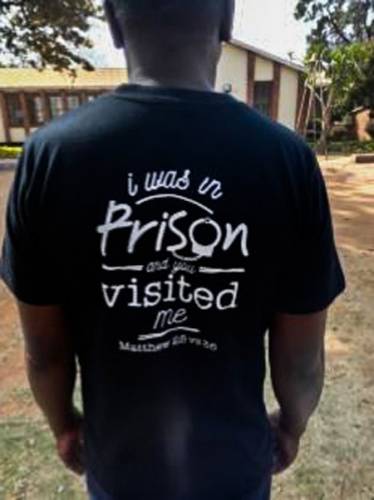 The back of the T-shirt worn by the Rev. Wickliff Kang’ombe Zulu, prison ministry chaplain. He wore the T-shirt while visiting Kachere Youth Prison in Lilongwe, Malawi. (Contributed photo)

On one of our visits to Kachere Youth Prison, Zulu arrived after meeting with the CCAP Nkhoma prison committees. He was wearing the prison committee T-shirt, which quotes Matthew 25:36: “I was in prison and you visited me.” As a chaplain I’ve been asked in various settings and in various ways what verse I use to motivate my ministry. And it has always felt like cheating to choose Matthew 25:36. After all, it seems like a command to me: Go and visit people in hospitals and prisons! Somehow it seems that having gone through all the theological and counseling training I’ve been through, I should have a more nuanced motivational verse. One that would make people say, “hmm,” as they ponder the verse in a new light.

Choosing a verse that basically says, “Go and be a chaplain” just doesn’t seem very fancy. But when I saw the verse on Zulu’s shirt, I thought, really, what better verse is there? People aren’t “the least of these” because they are somehow less worthy of love or value. Rather they are the “least” because they are forgotten, overlooked or ignored by society. They are the people who don’t fit into our daily routine, or make our lives messy, or remind us of the pain and suffering and complications that we can find everywhere in the world. Those things are unpleasant, and most of us do what we can to avoid spending much time thinking about them. And Jesus speaks right to that, saying, whenever you encounter someone who is forgotten, or reminds you of pain and suffering, or makes your life complicated, that’s where you will find me!

So go, visit, serve, love them, and remind them they aren’t alone, that they aren’t forgotten! And who knows — you might just find that Jesus has been there all along, right wherever you’ve forgotten to look.

Malawian prison chaplains such as Zulu work in conditions that are inhumane beyond words. The prisons in Malawi are estimated to exceed their capacity by 200 percent. Overcrowding often leads to extremely unsanitary conditions. Prisoners deal with dirty water, foul toilets and intermittently working showers. There are insufficient prison uniforms, no blankets with which to cover themselves and no soap. Inmates are fortunate to be fed one meal a day of beans and cornmeal mush (nsima) with water, which is nutritionally unsound, severely lacking in terms of vitamins and caloric intake. In these conditions, HIV/AIDS, tuberculosis and other diseases run rampant. In addition, many of the prisoners have been incarcerated for years without having their cases tried. 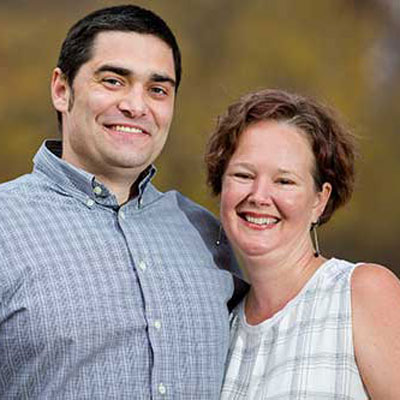 Jeremy and Luta Garbat-Welch are mission co-workers serving with the Church of Central Africa Presbyterian in Malawi, Zambia and Zimbabwe. (Contributed photo)

Many struggles in Malawi are also struggles in the U.S. penal system as related to the injustices of mass incarceration and racism. Presbyterian churches on both sides of the water have much to learn from one another.

“Churches engaged in prison ministry and advocacy in the U.S. might be interested in developing partnerships of mutual learning and support of CCAP’s prison ministry and that of Jeremy and Luta Garbat-Welch,” said Debbie Braaksma, World Mission’s Africa area coordinator.

To learn how you can become engaged in CCAP’s prison ministry, email Debbie Braaksma in Presbyterian World Mission.