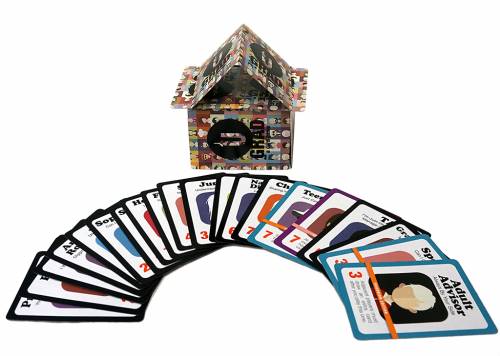 Santos, coordinator for Christian Formation and national director of UKirk—the collegiate ministries network of the Presbyterian Church (U.S.A.)—first discovered a passion for games while living in Germany in the early 2000s.

“The whole gaming culture completely blew me away,” says Santos, “I realized every single time someone sits down to a game, you have a new objective, you have to employ critical thinking skills, you have to work with different rules for engagement—it’s problem solving. You’re learning, you’re thinking, you’re engaging. It’s a relational activity.”

Inspired, in large part, by his own children and his desire to raise them around games, Santos began designing his own games in 2012, including one called “DinoRun!,” a light strategy game where little “dinos” try to escape an imposing wall of ice.

And although none of Santos’s games has yet to take off commercially, he continues to follow his gaming muse—this time, all the way to the campus of Purdue University in West Lafayette, Indiana, where over 4,500 high school-age youth, adult advisors, and leaders will converge next week, July 19-23, for the Presbyterian Youth Triennium.

His newly-minted card game, UGRAD, is set to debut there.

Santos says that the inspiration for UGRAD came from a 16-card elimination game called “Love Letters,” where the idea is to be the last person standing.

“While I loved the concept, there were some things I didn’t like about the game,” Santos explains, “so I said to [my colleague] Brian Frick, one day I want to make a collegiate version of this game.”

And now he has.

After first developing a prototype of the game—which he sent to PC(USA) campus ministers for their feedback—he says that he realized he had “something pretty fun” to take to Triennium, which was always his ultimate goal.

And while the game may be great fun to play, its objective is quite serious. “The goal for me as the national director of UKirk is to make sure that every teenager knows that UKirk is something that is out there for them,” Santos says. “Rather than give away a coaster at Triennium, I wanted to be able to give them something that they can actually do.” 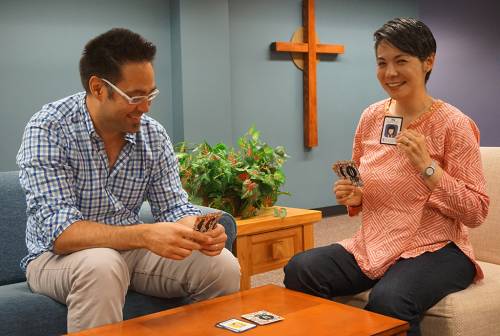 UGRAD is a 23-card character-based elimination game for 2-5 players based on a campus ministry theme. Players take turns drawing and playing cards with the ultimate goal of outlasting the other players or of having the highest point total at the end of the game.

The 18 characters in UGRAD—5 of which have duplicate cards—will be immediately recognizable to anyone who has ever spent time on a college campus: freshman, parent, annoying roommate, professor, campus minister, chaplain, dean, and president, for example. The higher the value of the card, the more influential it is.

Four special edition characters, a teenager, a small group leader, an adult advisor, and a speaker—which not coincidentally looks rather like the popular youth and young adult ministry speaker, Rodger Nishioka—are included in the “Triennium Edition.” The regular deck even includes a card for the UKirk national director, which bears no small resemblance to Santos.

And there’s also a character card for, well, JC, which not surprisingly is the most powerful card in the deck. The JC card—a kind of “trump” card—has the power to eliminate all players, except those who have a card with a point value of 3 or 7.

At Triennium, Santos will be giving away 500 copies of the base deck, but participants who want the special promotional cards will have to come by the UKirk booth in the Crossroads expo hall at the event. Each day, a new Triennium edition card will be released.

If the game takes off, Santos says he will order more copies. “My hope is that there will be enough interest in it that we’ll reorder,” he says. At the event, he will also be promoting “UKirk Daily,” a new smartphone devotional app for college students, which debuted last year.

Santos also plans to work with Brian Frick, associate for Camp and Conference Ministries for the Presbyterian Mission Agency, to develop a camp version of the game called UCAMP.

“My hope is that by the end of the week of Triennium, we’re going to just see kids playing this game randomly all over the place,” Santos says, “and that they will be engaging in conversation among themselves and with us.”

Presbyterian Youth Triennium is a gathering for high school age youth from the PC(USA) and the Cumberland Presbyterian Church that occurs every three years. The theme for the 2016 event is “GO.” While registration for this year’s event is now closed, readers may continue to visit the Triennium website to learn more about the event.