Make A Donation Click Here >
Home › What the General Assembly may say about St. Louis

Five congregations respond to the challenges of race, class 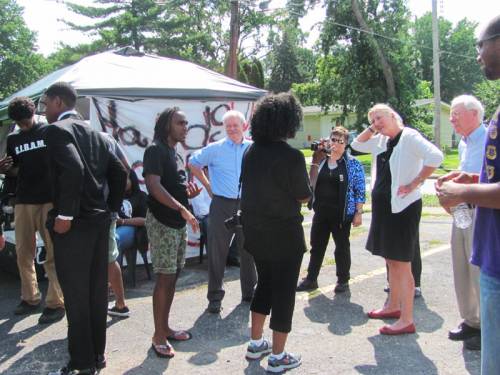 LOUISVILLE – The city of St. Louis is the historic centerpiece of a highly accomplished cultural and economic region. At the same time, like most of the United States, it is divided along lines of race and class. How do Presbyterian congregations minister and do mission faithfully in light of these realities? What can our larger church learn from our sisters and brothers in St. Louis?

Questions like those led to the report, “The Gospel from St. Louis.” If that report is adopted at the upcoming 223rd General Assembly, it will embody a dialogue with five congregations and their pastors, with additions from the presbytery executive, a biblical scholar, and the denomination’s committee that focuses on social witness and public policy. This is a dialogue that goes back to the Detroit General Assembly and may go forward to General Assemblies both in Baltimore (2020) and Columbus (2022).

The report’s title echoes the name of a report to the 221st General Assembly (2014) called “The Gospel from Detroit.” The Rev. Kevin Johnson, pastor of Calvary Presbyterian Church in Detroit and a member of the Advisory Committee on Social Witness Policy (ACSWP), co-authored that report. “The General Assembly was coming to Detroit when we were just getting over a bankruptcy crisis,” Johnson said. “There was a lot of that ‘what good can come out of Nazareth?’ attitude towards us. Thus, I asked that we try to hear good news from Detroit, and not simply visit the beauty spots.” The report looked hard at the abandonment that has affected many city neighborhoods and led to the formation of an Urban Ministry Network.

The Rev. Phil Tom, volunteer coordinator of the Urban Ministry Network, is a longtime urban pastor involved with community and labor organizations. “It is important for the church to listen to and work with people who struggle, and we have congregations that know how to do that. Our network exists to share that wisdom and to support pastors who have that commitment,” Tom said. The Urban Ministry Network helped build relationships that became “congregational conversations” at the 2017 Big Tent event, which was also held in St. Louis. Those five conversations became the basis for “The Gospel from St. Louis.”

Presbytery leader Craig Howard provides a preface to the report, noting that it is not a presbytery document, though the presbytery has been present with the congregations involved. Howard stresses the range of responses to what has at times been intense crisis over the killing of Michael Brown and the acquittal of police officers in several cases. Some have joined the justice protests on the streets, others fed children when schools were closed and still others have changed their practices of local mission.

The Rev. Cedric Portis, pastor of Third Presbyterian Church in St. Louis, led the congregational conversation last year at his church and this year serves as co-chair of the Committee on Local Arrangements for the Assembly. He has also helped host a meeting of the Urban Ministry Network. For Portis, “the point is to show that the city church can be both truthful and successful. We need to claim our gifts from God and serve the real needs of our communities.” His contribution is the first from the five pastors, reflecting their congregation’s experiences.

The inner-ring suburb of Ferguson has attracted much attention over the past few years, but before Brown’s tragic death, First Presbyterian Church had a team working on racial justice issues. In his brief essay, pastor Mike Trautman unpacks the way his church and he himself used family systems psychology and a steady commitment to reconciliation to keep ministering and growing in a very stressful place.

Second Presbyterian’s contribution was partly written by interim pastor (and former General Assembly moderator) Susan Andrews. Second has a grand historic building, but more impressive was its decision to stay “downtown”; in fact, it is near one of the city’s informal dividing lines. This has made the church’s own increase in African-American members a significant witness to the community as well as enrichment of its own life. Under its previous pastor, Second gave strong backing to the ecumenical organization Metropolitan Congregations United, which has helped address justice issues across the city.

The section of St. Louis called Cote Brilliante was the focus of a Supreme Court case mandating the official end of segregated housing. White flight intensified immediately after that ruling and left a Presbyterian church building empty. The presbytery, however, called a black pastor who — with God’s support — rebuilt an African-American congregation in that place. The Rev. Clyde Crumpton summarizes that history and then turns to the current challenges his church and his community are facing. “In our contemporary context the church is called to be a voice for those unheard and the oppressed, to advocate for truth, justice and the Christian way, to love thy neighbor and promote peace.”

The final pastoral essay is from the Rev. Erin Counihan, pastor of Oak Hill Presbyterian Church and moderator of the presbytery during a very eventful period. A tragic shooting in Oak Hill led Counihan and members of her church into the public struggles for police accountability and fair treatment of all citizens, spreading to a number of St. Louis neighborhoods. Counihan has shown strong leadership and has represented the church in surprising ways. Her contribution comes from her church’s newsletter, and it is about how hard it can be to break rules that do not serve everyone fairly — especially if you normally follow the rules. (Not all demonstrations shut down traffic, for example, but in part they challenge the documented discriminatory treatment of black motorists.)

Professor Deborah Krause, dean of Eden Theological Seminary, has also preached and marched with her students and with pastors and members over the past several years. A Presbyterian minister (and pastor’s spouse), she is co-presenting biblical reflections at the General Assembly. Her contribution to “The Gospel from St. Louis” distills a number of her sermons and exegeses that have helped the presbytery and seminary understand the “signs of the times.” Those signs signal that it is time to end the conscious and unconscious white supremacy that has shaped too much of our communities’ and churches’ life.

The policy section of the report includes recommendations for strengthening Presbyterian urban witness and remedies for reforming the justice system in the St. Louis area and elsewhere. It proposes support for alternatives to discriminatory and punitive practices that have helped perpetuate racial and class divisions, while recognizing that the problems of gun violence, police accountability and mass incarceration face our whole U.S. society.

Two supporters of “The Gospel from St. Louis” speak to its role in the church’s life. The Rev. Alonzo Johnson, an experienced urban pastor now serving as coordinator of the PC(USA)’s Self-Development of People program, played a key role in setting up the Big Tent conversations. He sees “The Gospel from St. Louis” pointing to the need for a range of community empowerment strategies, and to the work Urban Ministry Network is doing in sharing those ideas.

The Rev. Ray Roberts, co-chair of the ACSWP and a pastor in Richmond, Virginia, noted how the committee’s two meetings in St. Louis affected its thinking. “These congregations and pastors are contributing to the social teaching of our church. We look forward to supporting this urban ministry conversation as it continues toward Baltimore, and as we learn from the innovations of the Hands and Feet initiative.”

ACSWP has a total of seven reports before the General Assembly, including its self-study. It also has created a special thumb-drive of key social witness policies and studies of the past two decades that will be available to commissioners and be presented to the new moderator(s). But for Roberts, a native of Farmington, Missouri, the struggles in St. Louis call for both humility and determination, which “The Gospel from St. Louis” was designed to support.