Webinar will look at the legacy of Christianity as a tool of oppression, including at the Capitol insurrection 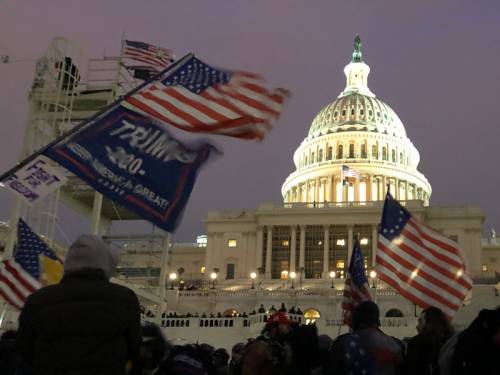 LEXINGTON, Kentucky — In the midst of the deadly attack on the United States Capitol Jan. 6, people saw images such as a cross, flags including one that read “Jesus is my savior, Trump is my President,” signs such as “Hold the line patriots God wins,” and religious messages scrawled on a gallows erected at the Capitol.

In a video released days after the insurrection, rioters held a prayer session on the floor of U.S. Senate. (The prayer occurs at the 8-minute mark; be advised the video contains strong language and disturbing images.)

This stands in stark contrast to the Presbyterian Church (U.S.A.) and other denominations that condemned the Capitol attack as a “seditious mob attack” and a manifestation of white supremacy.

So, what gives? How can there be two such diametrically opposed views of Christianity? How can white supremacists claim to be Christians?

Those are questions that will be tackled in the third episode of “Where Do We Go from Here?” a webinar series presented by the Presbyterian Office of Public Witness (OPW) on Capitol Hill. Previous episodes included a talk with the Rev. Dr. J. Herbert Nelson, II, Stated Clerk of the General Assembly of the PC(USA), and a discussion of the intersection of white supremacy and gender inequality with Presbyterian leaders who are women of color.

At 3 p.m. Eastern Time on Thursday, Feb. 11, the series will tackle white supremacy theology and the long history of Christianity being used as a tool of oppression. Joining moderator the Rev. Christian Brooks will be two leaders in the PC(USA):

Brooks said that the conversation will look at the presence of Christian images and rhetoric during the Capitol assault and how Christianity has been used over the centuries to oppress people based on race, religion, gender, gender identity, sexual orientation, and “the list goes on and on.”

After the initial shock of the Capitol attack, Presbyterian leaders said it is an important time for Christians to grapple with the role their faith has played in white supremacy and oppression, including its use to justify slavery and racist violence.

“The historical lens holds a lot of uncomfortable truth,” Dr. Chris Elwood, a professor of Historical Theology at Louisville Presbyterian Theological Seminary said in an interview with Presbyterian News Service. “The deepest need for those of us who belong to mainline denominations is to tell the truth about our own history of white American Christianity.”

“Where Do We Go from Here?” Episode 3 will be presented live at 3 p.m. Eastern Time Feb. 11 on the OPW Facebook page and on Zoom (click the Zoom link to register).