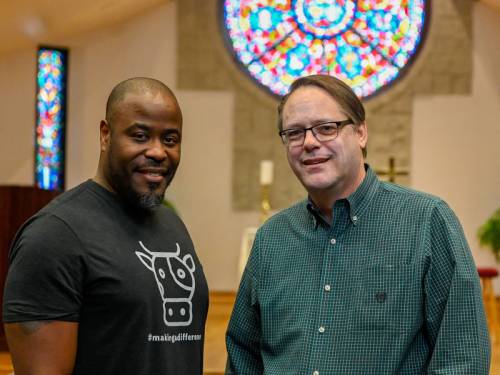 The Rev. Dr. Alonzo Johnson (left), coordinator of the Presbyterian Committee on the Self-Development of People, and the Rev. Jim Houston-Hencken of Grace Presbyterian Church in Las Vegas, Nev., in the church’s sanctuary. Conversations about poverty and similar issues between the two brought the SDOP national committee to Las Vegas Jan. 16–19, 2020. Rich Copley

LAS VEGAS — What brought the Presbyterian Committee on the Self-Development of People to a town widely known by the nickname “Sin City” for its first national committee meeting of the decade and its 50th anniversary year?

The answer, in part, was a relationship built with a church on the front lines of the consequences of those nickname–sake indulgences.

Leading a morning devotion with the committee, the Rev. Jim Houston-Hencken of Grace Presbyterian Church recalled arriving at work one day to find several emergency vehicles in his parking lot and first responders tending to a woman in distress, apparently as a result of drugs, prostitution or a similar cause.

Houston-Hencken went over to talk to the officers and asked, “Is there anything I can do?”

“The police officer laughed and said, ‘What is it you think you can do?’ ” Houston-Hencken said. “That has haunted me: ‘What is it the church can do in the face of human crisis?’ ”

Situated where Grace is, just off Interstate 15 which goes south to Los Angeles and north to Salt Lake City, the church sees its fair share of human crisis. It is a few blocks from two hospitals, just a half mile from the county jail and a few blocks from a drug rehabilitation program and other social services.

Weekend mornings are particularly busy when people who got in trouble the night before are turned out into the streets, Houston-Hencken says. Las Vegas has unique challenges, particularly with people who come to have fun, make really bad decisions and find themselves in trouble. Grace Presbyterian frequently receives calls from churches out of town who have members or relatives of members who came to Las Vegas, got in a fix and needed help.

“When you help somebody, you really see it here,” he says.

Warm weather, gambling, free alcohol, sex trafficking, and prostitution — which is legal in parts of Nevada, but not Las Vegas — make the city particularly attractive to people who are homeless, the pastor said.

“What we are dealing with in Vegas is every issue of poverty you can think of,” Houston-Hencken said.

That led the pastor to contact Self-Development of People (SDOP) coordinator the Rev. Dr. Alonzo Johnson and Margaret Mwale, Associate for Community Development and Constituent Relations, about presenting a poverty workshop for the Las Vegas community at the church.

Johnson said the request fit in with one of SDOP’s goals to make more connections in the western portion of the United States. And in Las Vegas, he said, the committee sees the opportunity to tackle a variety of issues including immigration, sex trafficking, racism, gambling, addiction, drugs and homelessness.

“Those are issues a local SDOP committee can be in constant interaction with,” Johnson said.

Houston-Hencken likes SDOP’s approach of funding projects that come from people in the community for the benefit of the community, as opposed to making grants to organizations or churches.

“This idea of sponsoring groups from the ground up, the grassroots, is right for this community,” Houston-Hencken said, citing Las Vegas-area constituencies such as a community of Nigerian immigrants and an active group of homeless youth.

The poverty workshop Johnson and Mwale presented in 2018 planted the seeds for a local SDOP committee in the Las Vegas area, though it could not come together in time for the January committee meeting at Grace Presbyterian. But national committee members and staff did host networking and grant-writing workshops at Grace before the winter meetings started. The grant-writing workshop was presented to a standing-room audience.

“Every person in that room was a leader in ministry, there to help the community,” Houston-Hencken said of the workshop Mwale helped lead.

Johnson said those meetings were “successful in getting a sense of the topography of the area, in listening to the community.

“They were really important tools in seeing how we can make a connection in Las Vegas, because behind the glitter and the glitz, there’s a lot of pain and hurt.”